Last month a buddy and I went up to Kelley’s Island on Lake Erie.  We didn’t see a lot of birds, but the scenery sure was nice!  Ohio road trip!

The trip up was good as usual. 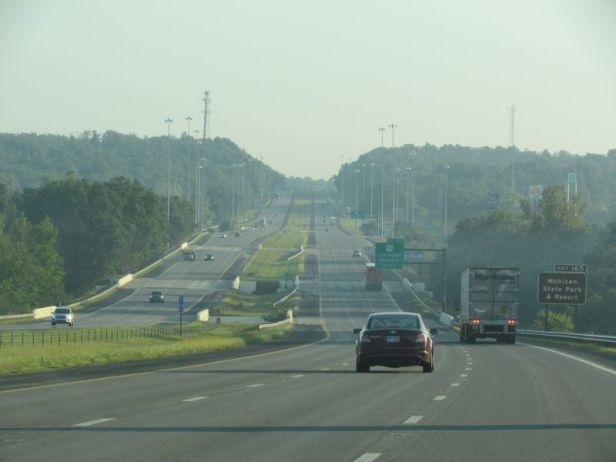 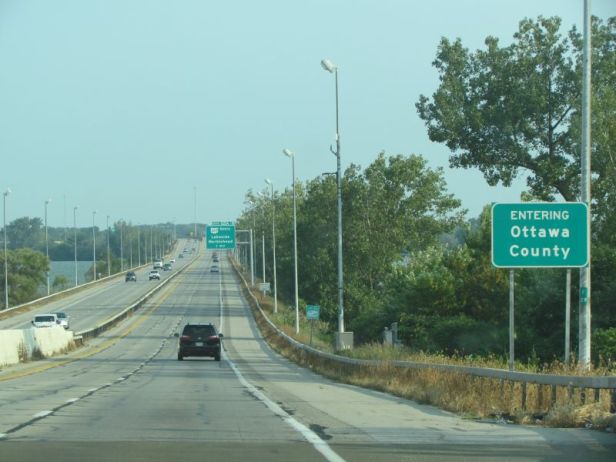 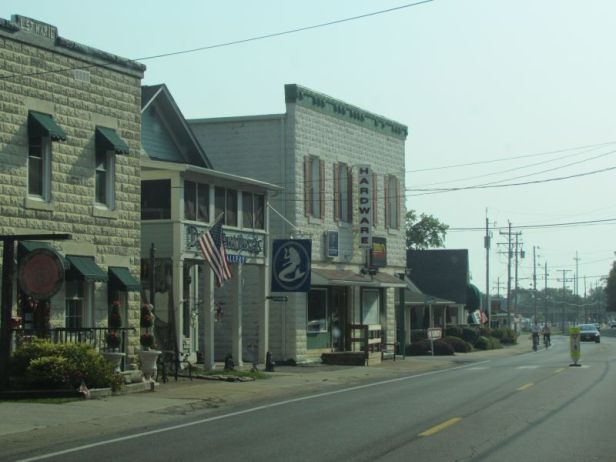 We went up to Marblehead to take one of the frequent ferries out to Kelley’s Island.  The rate was reasonable. You could go on foot or take your car over. 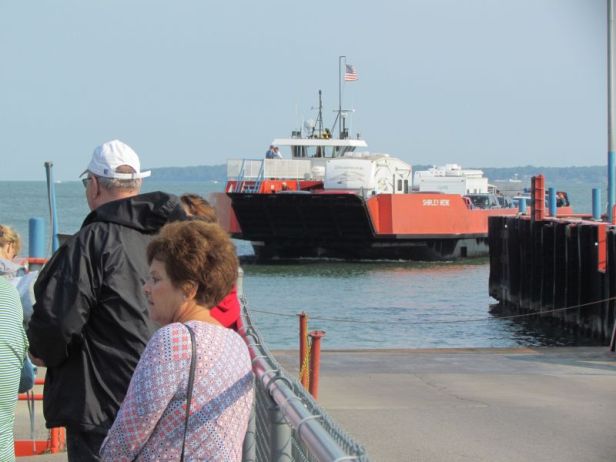 Lake Erie was fairly smooth for the trip out.  It’s the shallowest of the Great Lakes. 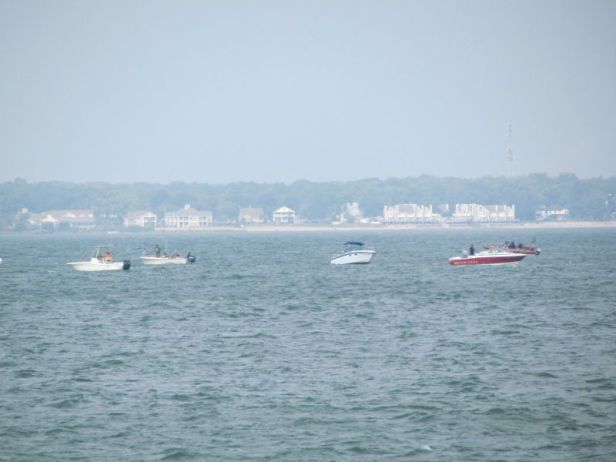 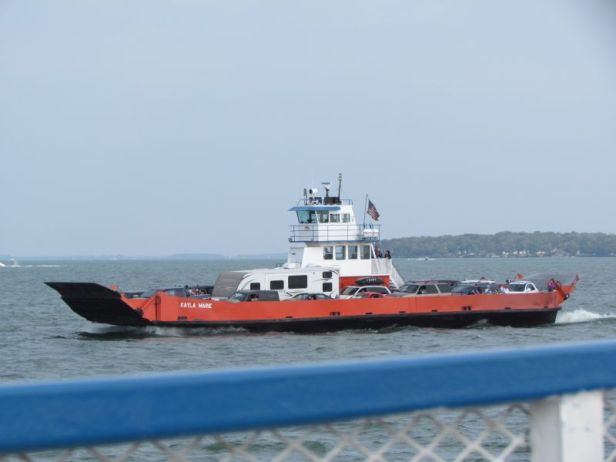 We passed another ferry coming back from the island.

There are a few islands off Ohio’s shores in Lake Erie- Put-In-Bay, Kelley’s, the Bass Islands- and they attract vacationers and day-trippers.  For us land-locked central Ohio folks, it’s like a bit of the ocean 🙂 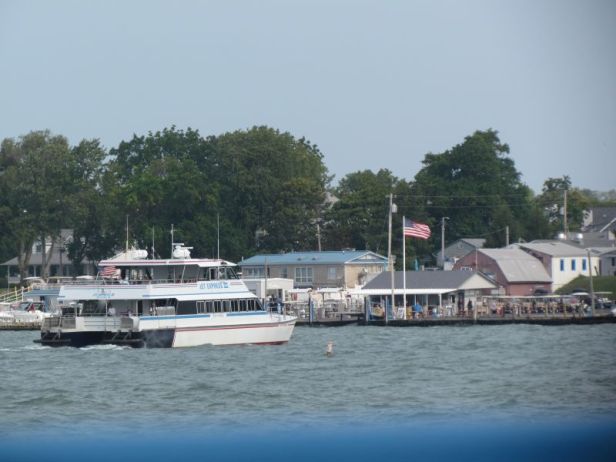 The ferry ride was only about 20 minutes.  Kelley’s Island is about 4 miles out into Lake Erie from Marblehead, Ohio.  It is the largest island in Lake Erie, being approximately 4.3 square miles in size. 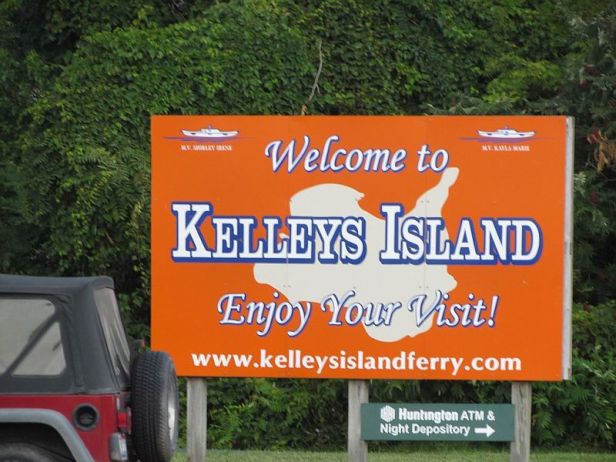 Incidentally, Kelley’s Island is both an island and an Ohio village.  It has an estimated year-round population of 312, but much more housing, campgrounds and camps exists for the summer tourist industry.  The island has a few roads, but golf carts and bicycles seem to outnumber cars.  Pubs, general/convenience stores, restaurants and gift shops- many of which close at the end of the tourist season- dot the island.

Being birders, we kept our eyes out for our feathered friends and saw them here and there. 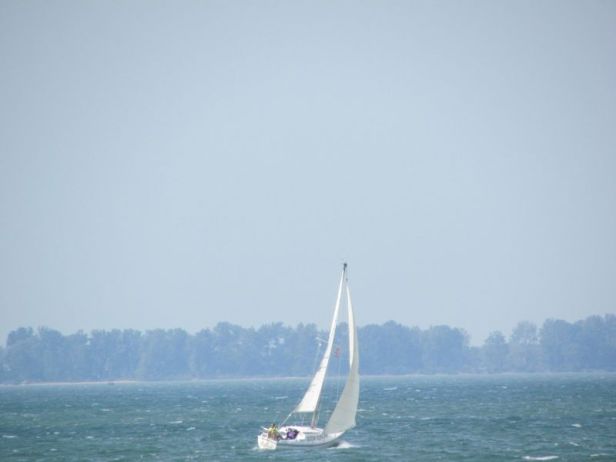 As you can imagine, boating is popular on and around the island.  Marinas dot the coast.

Here was the golf cart we rented for the reasonable rate of $14 an hour.  Many people prefer this mode of travel on the island.  Unfortunately, the horn button was placed right where one’s foot naturally rests on the floor, evoking the occasional startled tourist (and golf cart driver).  The funny part was we were making fun of people honking their horn in an accidental manner until we got our own cart and did the exact same thing.  Red-faced and humbled by a horn button badly placed!

There were a good amount of beautiful houses on the island, some done in the Victorian style popular when they were first built.  A smaller number are permanent year-round homes, a greater number are summer homes.

We drove around the island, taking in the sights.  We had a couple places in mind to visit, so all was not just convivial wandering. 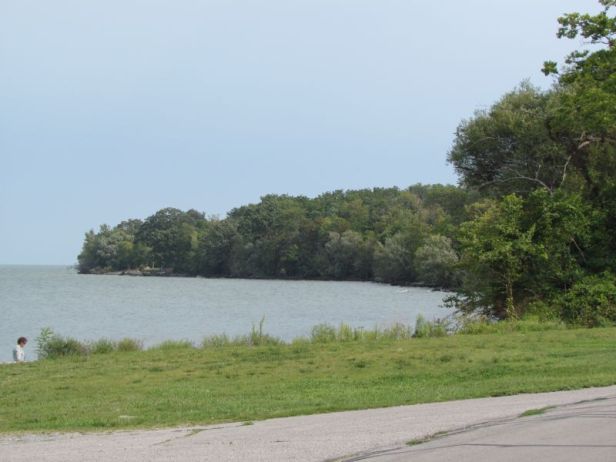 Occasional signs brought a smile to our faces. 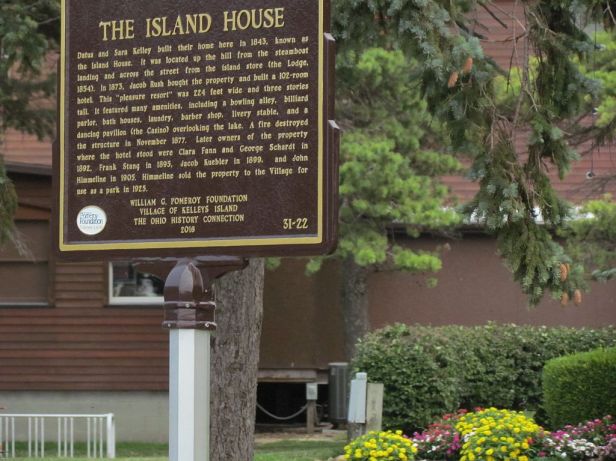 And there was history about, which always makes me happy!

Kelley’s Island was first settled by American settlers in the early 1800s- legend has it a man named Cunningham lived with Native Americans on the island in 1803 in a log cabin.  In 1830 the first quarry was created to extract limestone, abundant on the island.  Then the famous Kelley brothers showed up.

Datus and Irad Kelley were born in Middlefield, Connecticut on April 24, 1788 and October 24, 1791, respectively. Datus moved to Rocky River, Ohio in 1811, working as a surveyor and sawmill owner. Irad moved to Cleveland, Ohio in 1812, eventually becoming a successful merchant, postmaster, sailor, and real-estate investor. Irad Kelley first became aware of the island after being forced to seek shelter there while transporting goods via sloop sailboat from Detroit to his shop in Cleveland. On August 20, 1833, the two began purchasing parcels of land on Cunningham Island at the rate of $1.50 per acre. They eventually owned the entire 3,000-acre island, and in 1840 changed its name to Kelleys Island. By this time, the population had risen to 68 people.

The brothers quickly began improving and expanding the island’s docks to export limestone, fruit, and red cedar lumber. Soon, 16 limestone kilns were producing lime. The village’s various industries hired a number of immigrants (including young children), many of whom would work on the island during the summer and return to their homeland during the winter. Among the nationalities working on the island at that time were Poles, Slavs, Macedonians, Hungarians, Bulgarians, Italians and Portuguese. Datus Kelley encouraged sobriety, and paid his employees bonuses for abstaining from “intoxifying liquors”.

In 1842, Charles Carpenter (son-in-law of Datus Kelley) of Norwich, Connecticut began growing and harvesting grapes for wine on Kelleys Island; by the early 20th century, the island was annually producing 500,000 gallons of wine per year.

The quarries were the origin of the Kelley Island Lime & Transport Company, which was once the largest producer of limestone and lime products in the world, operating between 1896 and the early 1960s. Numerous ruins of these operations and quarries now dot the island.

The small village grew quickly, and soon a library and post office were erected. In 1901, the Estes Schoolhouse was built at a cost of $15,000. 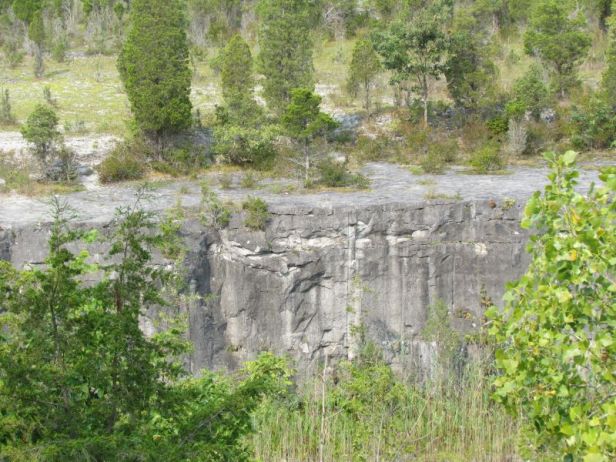 Old quarries can be seen here and there on the island. 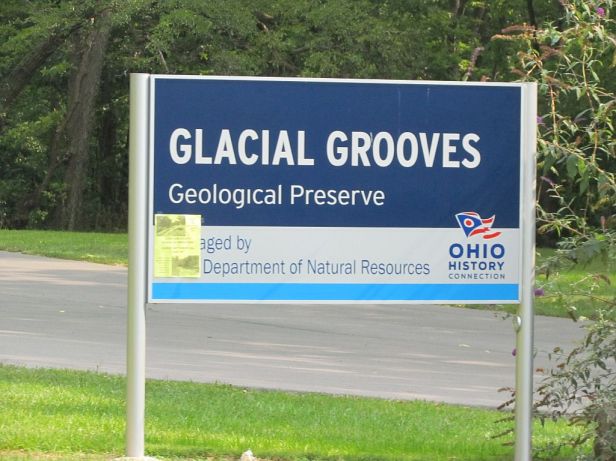 Speaking of geology, the Glacial Grooves Geological Preserve was one of our destinations. 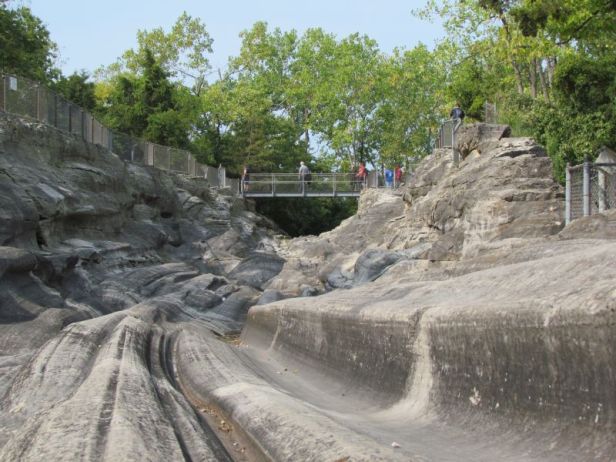 The Glacial Grooves are the most popular natural destination on Kelleys Island. Our grooves are the largest and best accessible example of this geological phenomenon anywhere in the world! They are located at the intersection of Division Street and Titus Road, only a mile and a half north of downtown. A paved parking lot provides easy access. The grooves are visible from the parking lot or from a winding series of steps and footbridges that loop around their upper rim. Don’t miss this must-see treasure – a National Natural Landmark that draws visitors to Kelleys Island from all around the globe!

The glacial grooves are 400 feet long, 35 feet wide, and up to 15 feet deep. They were created by the slow movement of the massive glacier that created the Great Lakes and Lake Erie Islands. When glaciers move across the earth, they pick up rocks, soil, and other debris, and drag them along. As the ice crept over the soft limestone bedrock of Kelleys Island, these harder bits of rock gouged the grooves that we see today. Originally, the grooves were filled with soil, debris, and quarry waste. In 1972, excavation to uncover the full extent of the grooves began, and they have been a popular tourist attraction ever since. The grooves are also important to historians, scientists and students. They give us valuable information about the direction and movement of the glaciers that shaped our entire landscape.

One of the interpretive signs said that the grooves were carved into the rock by the at the rate of an inch or so a year in the area of 18,000 years ago by the force of the sheet of ice in one of the recent Ice Ages. 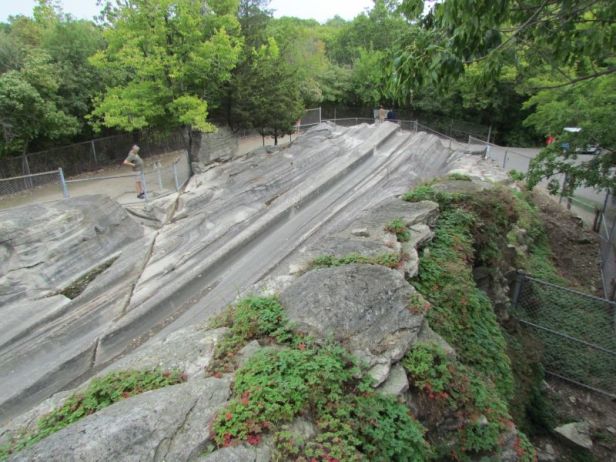 Another area of interest was the state park on the island.  A modest beach was on the northern shore. 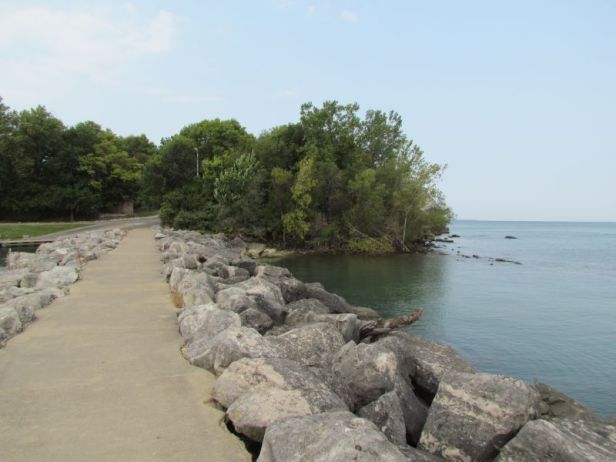 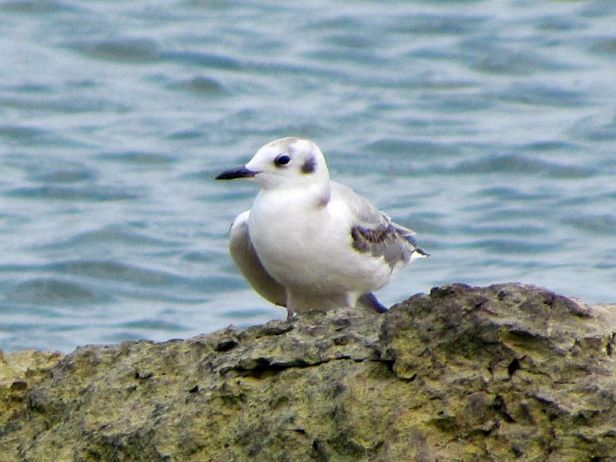 We saw this immature Bonaparte’s Gull at the state park.  It was a life-list bird for my buddy.  You have to be a birder to appreciate how good it feels to see a new species of bird!

A cemetery, containing the body of one of the founding Kelley brothers, was also on the island. 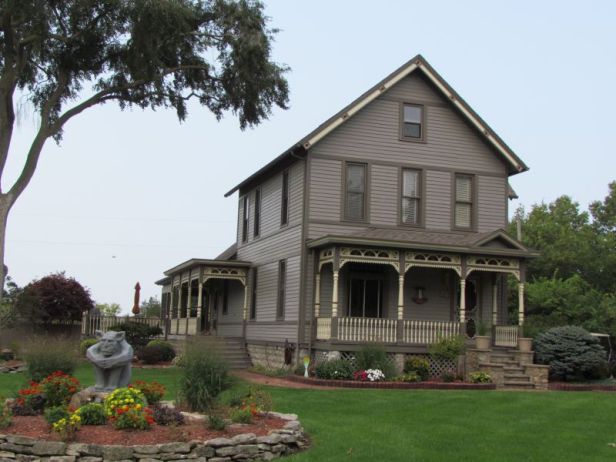 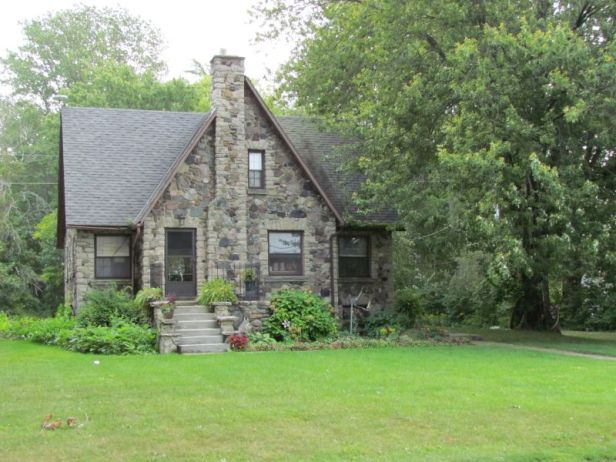 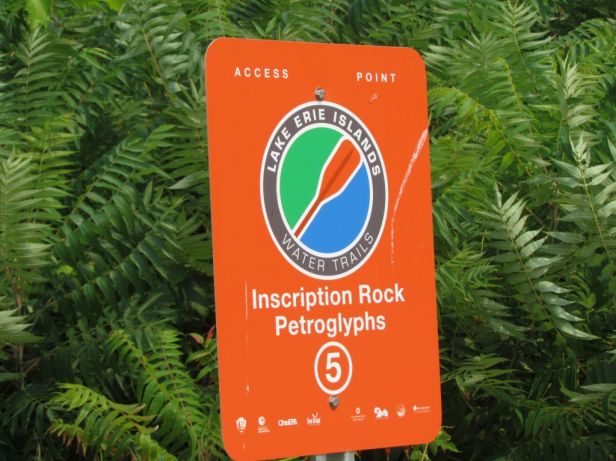 Suddenly, a reminder that human habitation of the island went back further than American settlers.  Inscription Rock Petroglyphs is an historical site on the south shore of the island.

Inscription Rock is a large limestone boulder on the southern shore of Kelleys Island. The rock takes its name from the many petroglyphs carved into its soft surface. These markings were made by Native American tribes that inhabited the island before European and American settlers arrived. Unfortunately, exposure to the elements has eroded the inscriptions and made them difficult to see. A scale replica, produced from sketches and rubbings done in the 1850s, is displayed next to the rock to help show visitors what the inscriptions once looked like. Inscription Rock is located at the intersection of Lakeshore Drive and Addison Road, a short walk from downtown Kelleys Island or the Kelleys Island Ferry. A wooden platform allows easy viewing of the inscriptions and the replica stone.

The precise age of the inscriptions is unknown. Based on the symbolism and the degree to which the soft limestone has weathered, they are probably less than one thousand years old. As a result, historians believe that they are the work of one of two groups: the so-called “Late Prehistoric” period Sandusky culture, or American Indian peoples living in the region during the period of European colonization. The remains of at least two Native American villages have been found very close to the rock.

Though faded, the inscriptions are some of the finest examples of aboriginal art in the Great Lakes region. No one is exactly sure what the unusual drawings depicted. The most widely accepted theory states that Native Americans used Inscription Rock as a message stone. They would carve drawings marking their passage through the area and noting details about hunting, fishing, and future destinations. In 1969, The Ohio Historical Society erected a cover in an attempt to protect what remains of the quickly-fading petroglyphs.

We saw the above Cedar Waxwing in a tree next to Inscription Rock.  The bird posed for us, nicely. 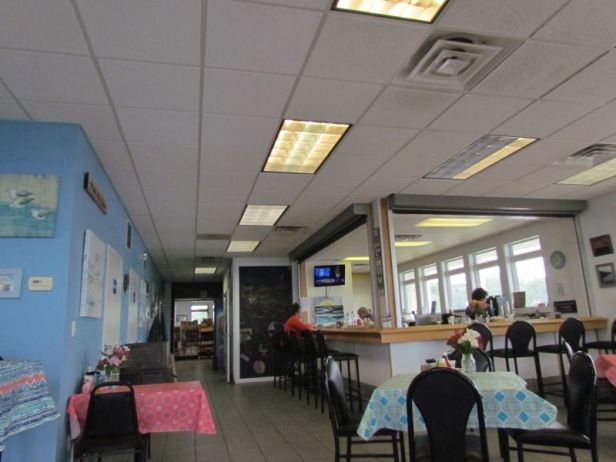 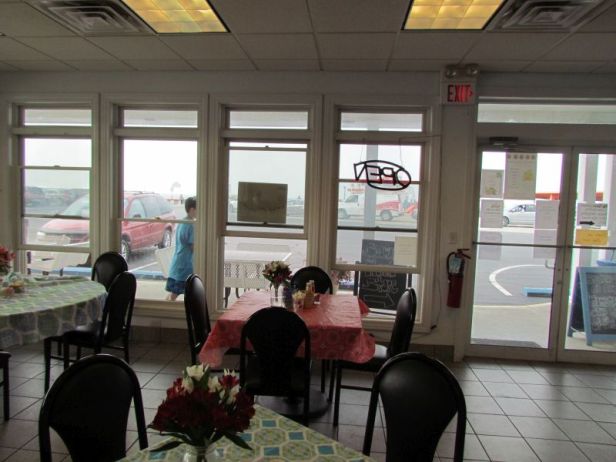 After a stop at one of the restaurants on the island, it was time to head back…sadly.

Back on another ferry and back to Marblehead- and eventually, home.  It was a fun and interesting trip, especially for us landlubbers!