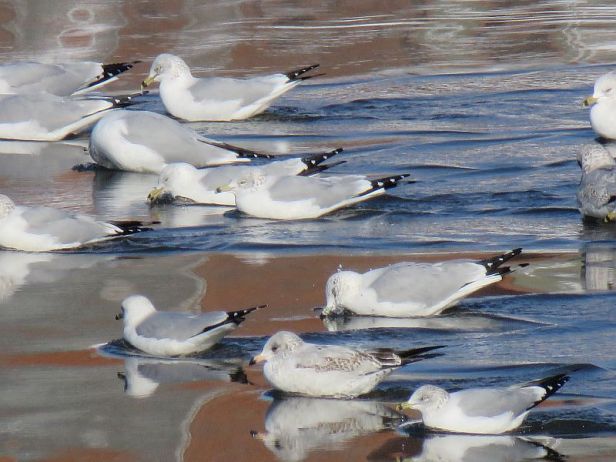 Seagulls can be found in great numbers in Ohio, despite the lack of a seashore.  Lake Erie to the north and the mighty Ohio River to the south host many of these birds.

Yet the spaces in between host seagulls as well.  They can be found at reservoirs and lakes, inland rivers, trash dumps and even large shopping center parking lots.  Well, at least a few prominent seagull species can be found at these inland spaces.

The three common gulls of interior Ohio are: 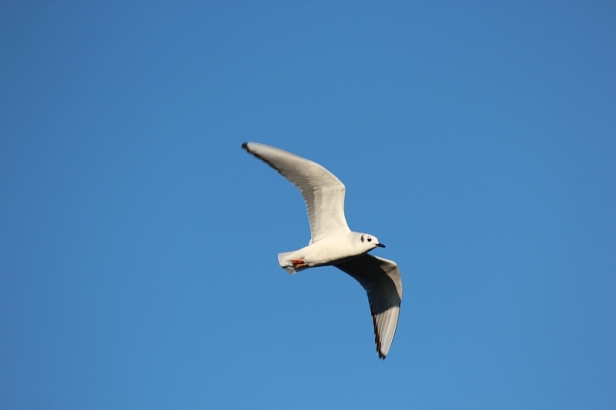 This small gull winters over most of Ohio.  I’ve found them in reservoirs in cold weather, usually in their immature plumage- mostly white with pink legs and a dark smudge behind the eye.  They have a black bill. 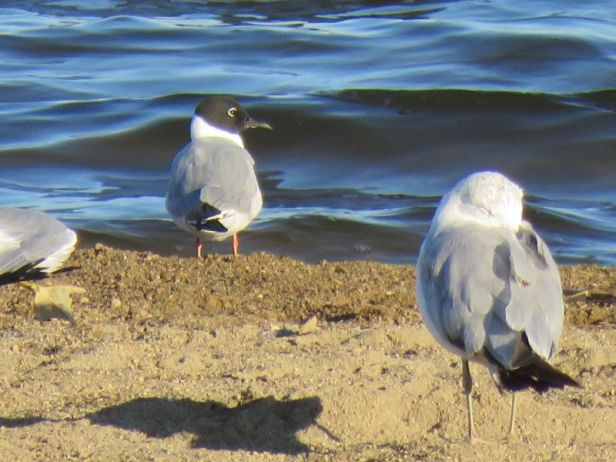 Adult plumage (as seen in the bird above) is a black head with partial eye ring-don’t mistake one for a Franklin’s Gull, though.  Gulls can be tricky to identify, especially the immatures which sometimes go through three different appearances before putting on their adult plumage in a few years. 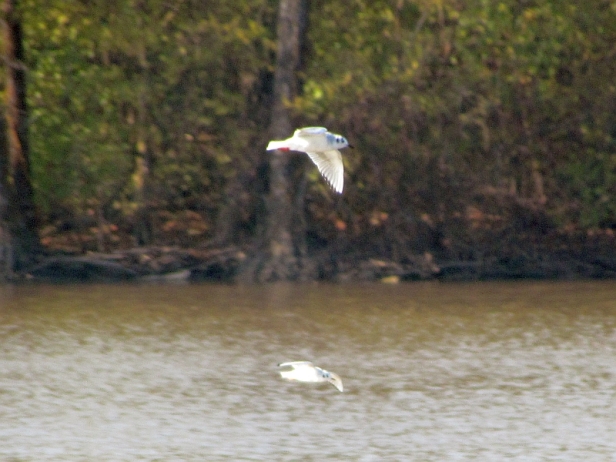 Interestingly enough, the Bonaparte’s Gull- named after a French ornithologist, a nephew of THE Napoleon Bonaparte- nests in trees, which is almost unheard-of for gulls.  It nests in Canada. 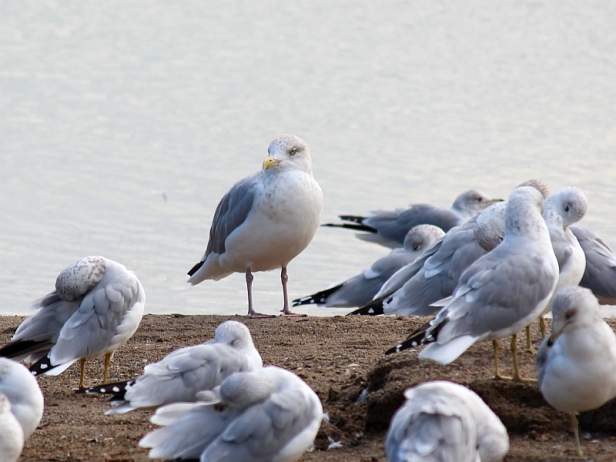 Whereas the Bonaparte’s Gull is small, the Herring Gull is large (notice how the bird pictured above stands out for its size).  Its beak is massive, with a red spot on the lower mandible of adults.  The legs are always pink. 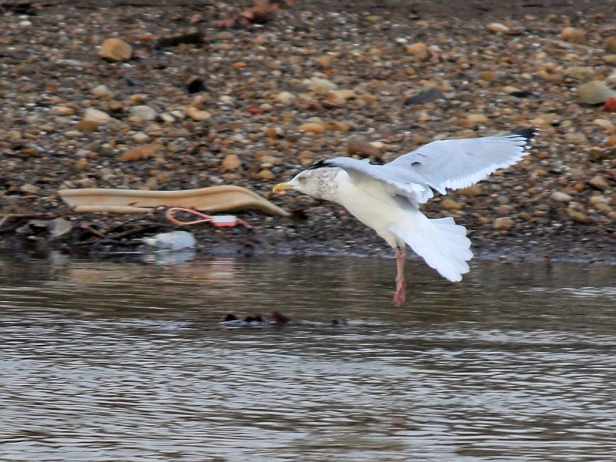 Immatures can vary in appearance (they take 4 years to get their adult plumage), but they are always larger than most other gulls.  I see them in smaller numbers hanging around with other gulls on reservoirs and beaches.

Last but certainly not least are the Ring-Billed Gulls.  These are by far the most numerous of Ohio’s seagulls (perhaps in North America too).  They are a medium-sized gull with (hence the name) a dark ring around the yellow bill.  Its wings extend past the tail when folded, and it has yellow legs (except for young birds who have pink ones- I told you it wasn’t easy!). 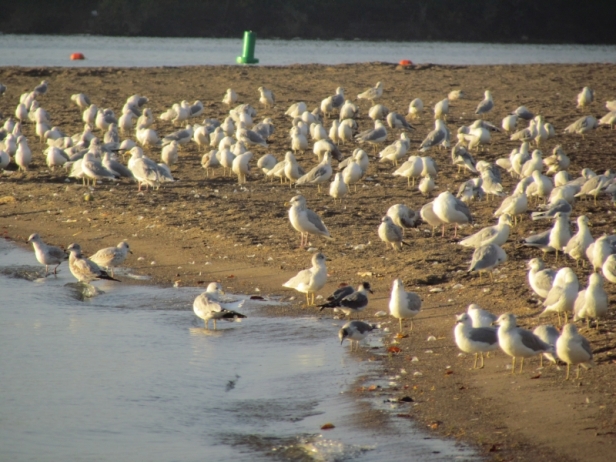 When you see a large flock of gulls inland, the majority are usually Ring-Bills.  But always look for other species blended in.  Terns, Sandpipers and other birds may be there as well. 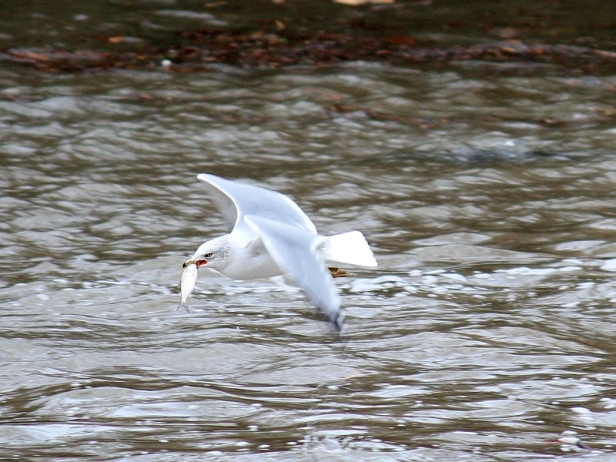 This bird caught a fish on the wing, dipping its head into a river while flying low over the water.  They are expert fishermen. 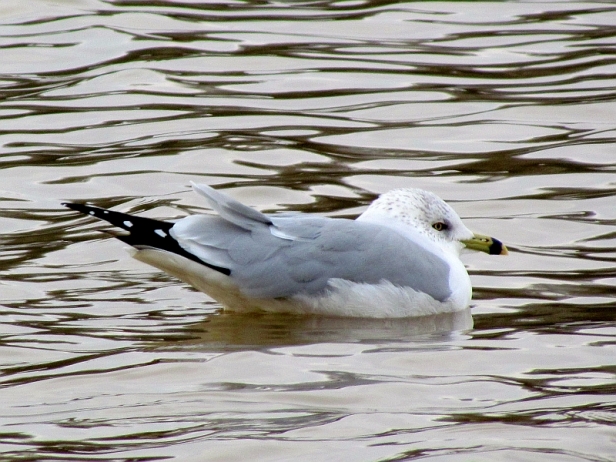 These bids are as at-home on the water as they are on the land.  Adults have pure white heads but immature birds often have tiny spots of color. 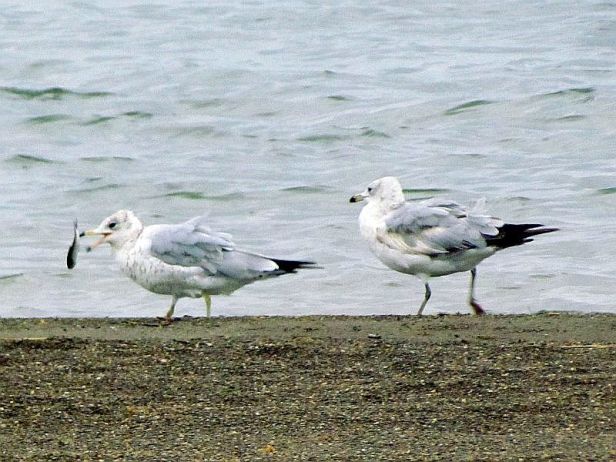 When one has some food, others will often try to get in on the action.  Gulls have to learn to eat fast.  This bird is flipping the fish around, the better to swallow it.

Several years ago I posted about Seagulls Squabbling Over Fish.

Ring-Bills are often seen at lakes, reservoirs and rivers, but they also can be seen in such places as parking lots (near food places) and garbage dumps.  Seagulls, especially Ring-Bills, are scavengers and much like Pigeons can be encountered begging for food.  They’ll eat about anything.  In the picture above, notice the several immatures with brownish speckles and pink legs. 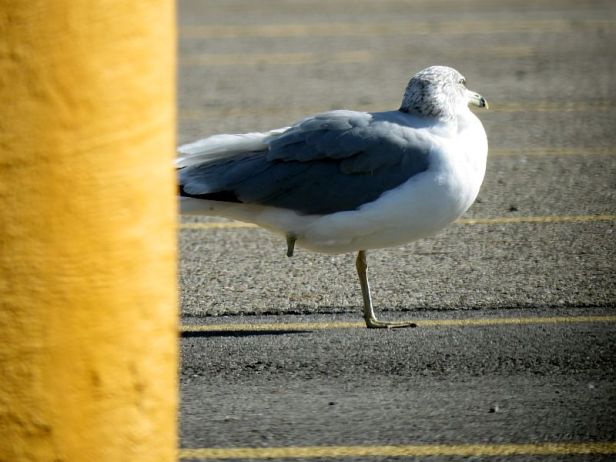 This fella is missing a foot- I encountered it at different areas around Columbus over the space of a few years.  The bird still got along well enough. 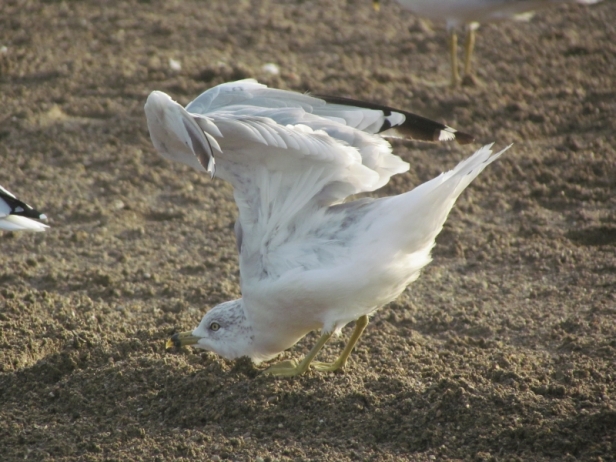 This bird is doing what I call the ‘Boss Bird’ routine- making itself look big and menacing, squawking up a storm, impressing the other gulls that I Am In Charge!  Pecking order stuff 🙂 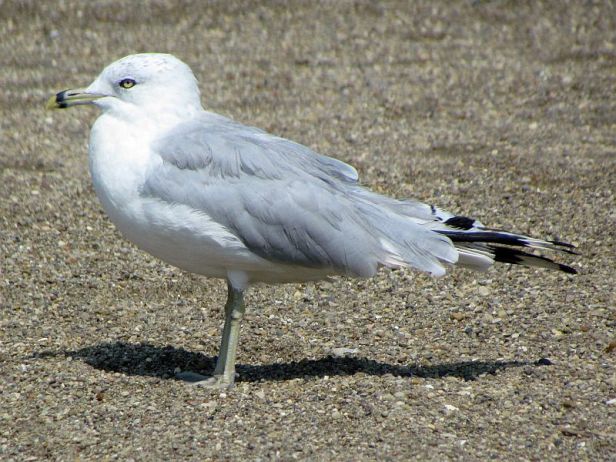 Ring-Bills are tolerant of people and will let you get fairly close as long as you don’t walk right at them.

So the above three species are the common gulls to be seen in the interior of Ohio.  But keep your eyes peeled, because occasionally other species show up, rare visitors sometimes blown off-course by massive storms or veering away from their usual migration routes.

Here’s some other species I’ve seen over the years. 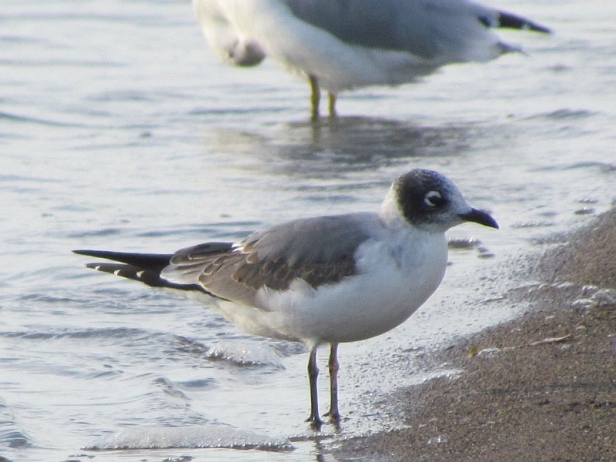 Blogged about at Rare Migrant Seagulls 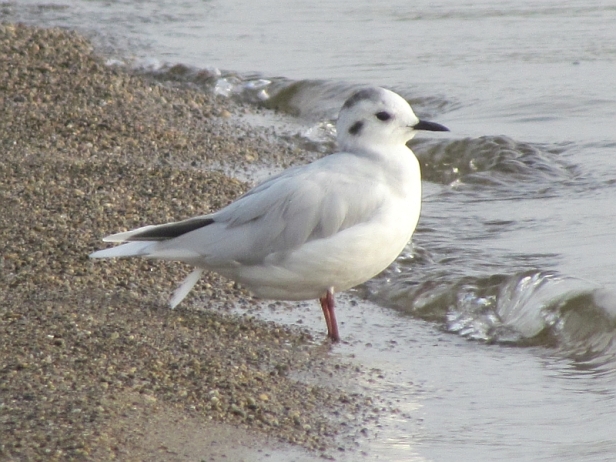 Blogged about at The World’s Smallest Seagull 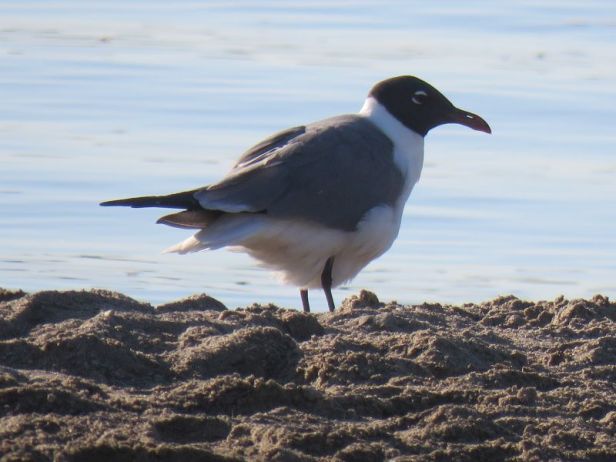 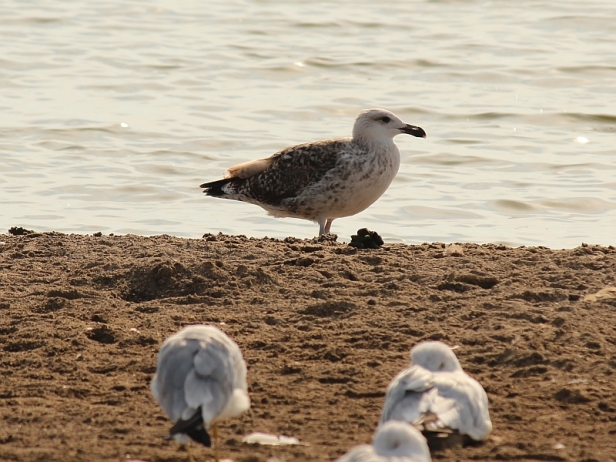 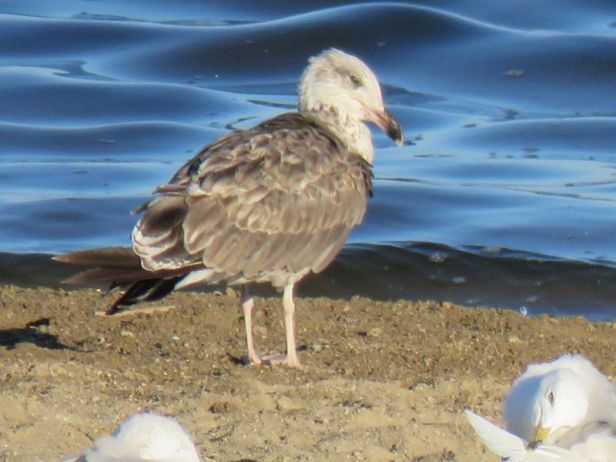 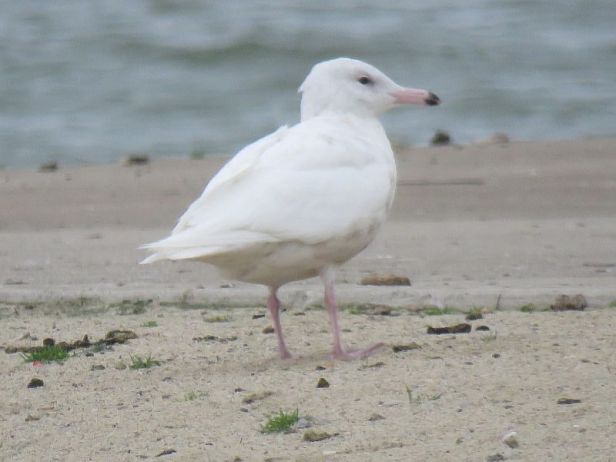 Gulls are interesting birds, not the easiest to identify if they aren’t in their adult plumage, but always worth checking out.  If you see a large group of gulls, study the individuals carefully- sometimes you’ll see a hidden gem in the flock.