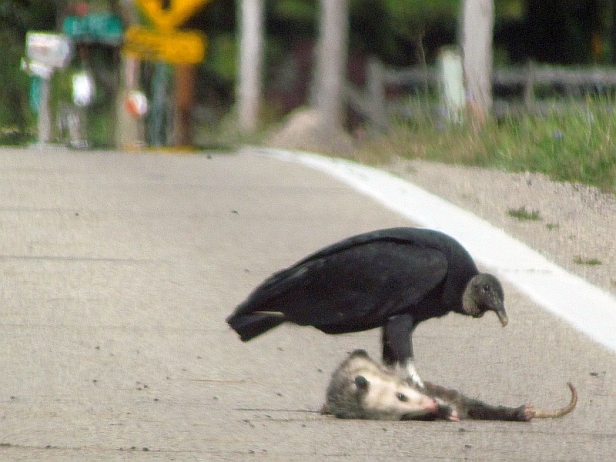 This is a timely post- early March is seeing Vultures returning from their southern wintering grounds to Ohio once more.  Actually I saw some in February- the winter here has been overall mild- but March is the traditional month for seeing real numbers of them show up.

Vultures are large scavenging birds of prey- they typically eat dead animals that they find.  Other birds of prey such as Eagles and Hawks kill their meals.  New World Vultures include such magnificent specimens as California Condors, but in eastern North America we have two widespread species.  More about them in a bit.

Birds are renowned for their sharp eyesight and hearing.  But Vultures surprisingly use their keen sense of smell (rare in birds) to detect the odor of dead meat.  Not always appreciated because of their sinister and scraggly looks, they fulfill an important function in nature- cleaning up all the dead animals.  It would really be a mess out there if they weren’t on the job.

This is a common warm-weather sight as I drive all over Ohio’s backroads.  Roadkill is a primary source of Vulture meals.  Carcasses would really build up if they weren’t on their menu.

The most numerous species of Vulture in Ohio is the Turkey Vulture.  This bird is a common sight in warm weather, soaring slowly in the sky.

They are easily identified by their habit of soaring with wings in a V-shape, and their bright pink heads, although immature birds have black heads.

A particular characteristic of many vultures is a bald head, devoid of normal feathers. Although it has been historically believed to help keep the head clean when feeding, the bare skin may play an important role in thermoregulation. Vultures have been observed to hunch their bodies and tuck in their heads in the cold, and open their wings and stretch their necks in the heat.

Speaking of open wings, you can find many a Turkey Vulture sunning themselves while perched.

This helps warm up a bird and undoubtedly feels quite nice, the equivalent of a human lazing in a hammock on a sunny day. 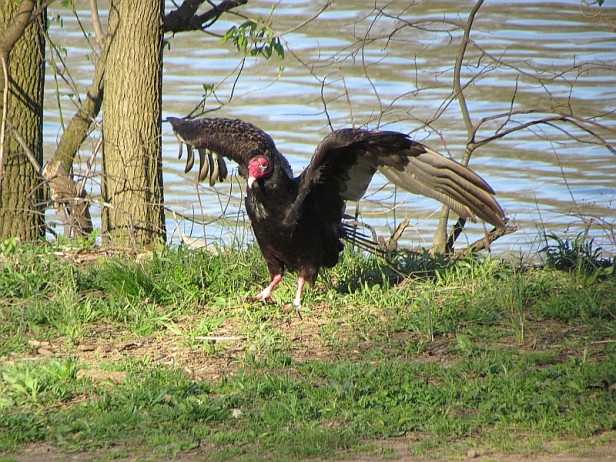 Turkey Vultures will sometimes be seen gathered on the shores of lakes, ready for a quick bath.  Other social occasions include roosting in trees and flying in swirling groups during migration, known as ‘kettles’.

Turkey Vultures are commonly seen out in rural areas, but they can be seen in suburbs and city areas too.

I saw this bird at a fairly busy intersection in Grove City near a favorite restaurant of mine.  I’ve never heard them make a noise save for a hiss when they are disturbed.

Like Owls, Turkey Vultures like to nest in old barns.  I caught this glimpse of a downy-winged bird in an abandoned barn I often drive by.

Here’s an immature Turkey Vulture without the pink head.

Ohio’s other Vulture species is the Black Vulture.  Until recently, this bird was far less common than its cousin the Turkey Vulture, and largely seen in the southern part of the state.  But in recent years their numbers have increased as they have spread further north.  I see them significantly more often now than I did a decade ago.

Black vultures are primarily a scavenging bird of prey that has begun to expand into Ohio from southern states in the past century. Between the first and second Ohio Breeding Bird Atlases, black vulture occurrence increased by a whopping 387% among priority blocks. While the exact causes for the expansion are unknown, possibilities include the banning of DDT, expansion of cell phone towers that provide roost sites, and a warming climate.

Vultures certainly do like to perch on tall towers.

Black Vultures have been known to attack small animals, a behavior not seen in their Turkey cousins.

I took this photo a few years ago, both Turkey and Black Vultures roosting on the roof of Deer Creek State Park lodge.  It was the end of October, and they were warming themselves at air vents and chimneys.  I talked to the lady at the desk inside the lodge and mentioned them.  She said that at certain state parks they have to give overnight visitors tarps to cover their car windshields.  For some reason, the odd Vulture likes to tear the rubber windshield wipers off of vehicles.