There’s a certain behavior in birds that seems surprising when you first see it- smaller birds ganging up on larger birds.  This is called ‘mobbing’.

Here’s an example.  A few years ago I saw a group of Blue Jays gathered around a Red-Tailed Hawk squawking at it noisily.  Normally, these Blue Jays may be the target of such a Hawk, as in ‘dinner’.  But the Blue Jays had gathered around this Hawk and made a big racket.  The Hawk eventually left.

Here’s a definition of mobbing from Wikipedia:

Mobbing in animals is an antipredator adaptation in which individuals of prey species mob a predator by cooperatively attacking or harassing it, usually to protect their offspring. A simple definition of mobbing is an assemblage of individuals around a potentially dangerous predator. This is most frequently seen in birds, though it is also known to occur in many other animals such as the meerkat, and some bovines. While mobbing has evolved independently in many species, it only tends to be present in those whose young are frequently preyed upon. This behavior may complement cryptic adaptations in the offspring themselves, such as camouflage and hiding. Mobbing calls may be used to summon nearby individuals to cooperate in the attack.

Mobbing appears to be a defense strategy against predators to get them to leave the area to reduce risk. 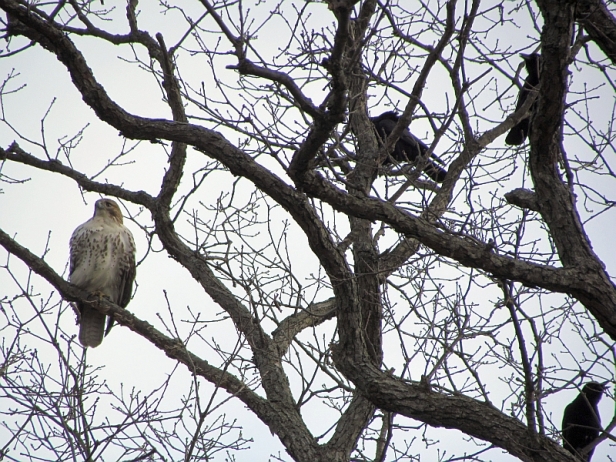 Here’s another Red-Tailed Hawk being mobbed by a group of Crows who have landed near it in the same tree and are raising a ruckus by cawing loudly.  This alerts other birds- potential prey of the Hawk- that there is danger about, and where that danger is.  This makes it very difficult for the predator to hunt successfully.

Here an Eastern Kingbird nearly lands on the back of yet another Red-Tailed Hawk while pecking at it in flight!

You would think that the mobbing birds might be at risk from the predator they are mobbing.  But normally, predators such as Hawks and Owls need to get the drop on their prey by speed and stealth, hitting an unsuspecting target from a blind side.  So when they are clearly in sight of their potential prey, those prey birds are at much less risk.  You see this with Squirrels as well- Squirrels can run rings around a Hawk as long as they see it- if they don’t see it, Hawks can get the drop on them and hit them like a thunderbolt.  I’ve seen this with my own eyes.

In this photo I took at Kiwanis Riverway Park, a Robin and a Red-Winged Blackbird join forces to mob a Hawk.  This is another feature of mobbing- birds of different species often join together in mobbing a potential predator.  I’ve seen tiny Chickadees join in a mobbing by larger birds such as Blue Jays and Crows.  This seems to be a strong behavioral response- that birds frequently will come flying when they hear another bird squawking at a predator.  If all birds join in, everyone is safer in the long run.

Speaking of Red-Winged Blackbirds, they are legendary in their aggressive actions against other birds in their nesting territories.  They chase just about anything away- they’ve even hovered a short distance above me clacking up a storm as I’ve walked on a path near their territory.  Here a Red-Wing chases away a Turkey Vulture.  This behavior is between mobbing and just sheer aggression to keep any and everything else away from their young. 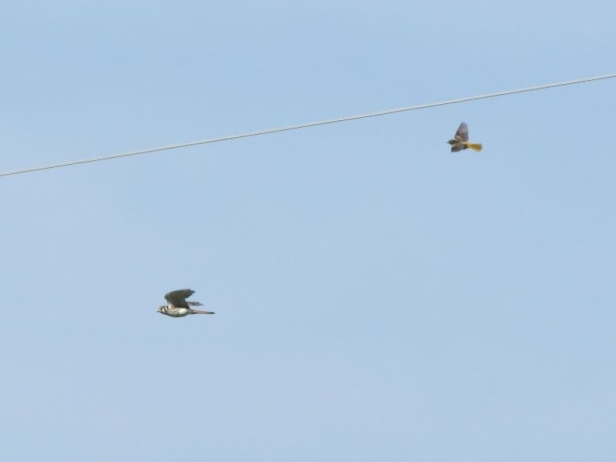 Here an American Kestrel (Sparrowhawk) is being chased by a Baltimore Oriole during nesting season.  Kestrels are strong fliers, but this Oriole (one of a pair) flew at it until it was far away from its territory.

A Cooper’s Hawk swoops at yet another Red-Tailed Hawk to drive it away from its territory.  They were no doubt competitors for local prey.  Other bird species joined in!

Birding tip: when you hear multiple species of birds squawking loudly in a small area, look for a predator that they may be mobbing, such as a Hawk or Owl.

Mobbing is often studied by ornithologists (bird scientists).  Apparently mobbing is more common during nesting season, when young offspring are more at risk.  One paper even suggested that mobbing behavior by male birds demonstrates their fitness to potential female mates who are watching.

Keep your eyes and ears peeled for mobbing!