Back before World War II, you expected to see a certain variety of plants on your lawn.

You’ll certainly recognize Clover, which grows on quite a few lawns worldwide.  It is mostly looked upon as a troublesome weed today.  But decades ago, Clover seed was actually mixed in with lawn grass seed.

How did we get here?

Before World War II, things looked more…natural, I guess you could say.  Since then, the growth of chemical herbicides has enabled many a homeowner to take up the Quest For The Perfect Lawn.  The perfect lawn being one that only has one type of grass upon it, which looks pleasant.

But there was a reason why fodder plants were so widespread in the past.  Two big reasons, actually.

The Benefits of Lawn Weeds provided me with a good amount of the following information.

Fodder, a type of animal feed, is any agricultural foodstuff used specifically to feed domesticated livestock, such as cattle, rabbits, sheep, horses, chickens and pigs. “Fodder” refers particularly to food given to the animals (including plants cut and carried to them), rather than that which they forage for themselves (called forage). Fodder is also called provender and includes hay, straw, silage, compressed and pelleted feeds, oils and mixed rations, and sprouted grains and legumes (such as bean sprouts, fresh malt, or spent malt).

Before farms were something far away from most people, they covered much of the land.  Feeding farm animals with inexpensive drought-tolerant plants was just common sense.  Fodder plants such as Clover spread over most of the world for this reason.  A side-benefit of them is that they help keep the soil from eroding.

Pollinators such as bees use fodder plants as a source of nectar.  There is so much Clover that it is a significant source of reliable food for them.

These plants not only feed our livestock, but fertilize the soil by themselves.  This is a very important process that enriches the soil so that everything has more nutrients to grow better.  This process is called nitrogen fixing.

Nitrogen-fixing plants are those whose roots are colonized by certain bacteria that extract nitrogen from the air and convert or “fix” it into a form required for their growth. When the bacteria are done with this nitrogen, it becomes available to the plants, themselves. It is an example of a symbiotic relationship (between plant and bacteria), and the name for the process is “nitrogen fixation.”

Landscapers, gardeners, and farmers value nitrogen-fixing plants for their ability to contribute an essential plant nutrient (namely, nitrogen) to the soil. Nitrogen is one of “the big three,” being the “N” in NPK, the three letters that form a virtual stamp of approval for a complete fertilizer…By exploiting the process of nitrogen fixation, you can obtain this plant nutrient for your soil without resorting to chemical fertilizers.

So, have a little more respect for these very useful weeds!

Here are some common fodder plants I see here in Ohio. 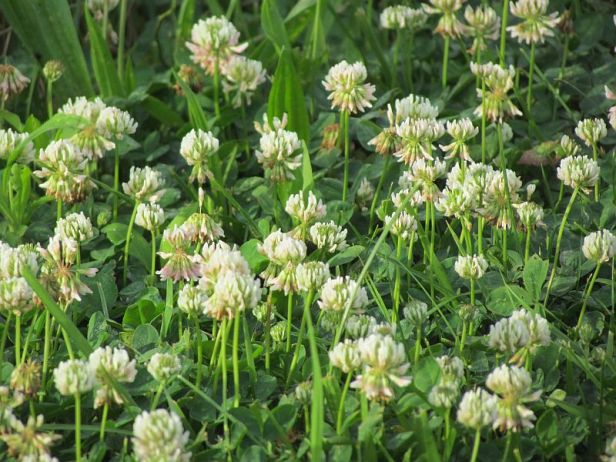 This is n abundant fodder plant, famous for its 3-leaved ‘shamrock’ clusters.  Probably the most common ‘weed’ on your lawn (after Dandelions).  It is very hardy and has been described as the most important forage legume of temperate zones worldwide.  Boiled, it’s even good for salads.

Red Clover is a taller and larger plant than its white cousin.  Its 3-leaved clusters have a distinctive light pattern upon them.  It’s acceptable to many gardeners as an ornamental plant, and is used in traditional medicine.  I often see them along paths in warmer weather.

Carl Linnaeus, the father of modern taxonomy, mistook Alsike Clover as a hybrid between White and Red Clover.  It isn’t, but it surely looks like it- pinkish and taller than White Clover.  It can often be seen in fields and waste areas. 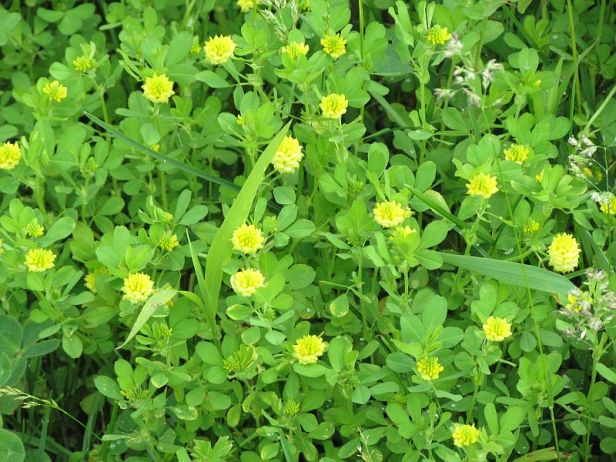 There’s those 3-leaved clusters again, but the blooms are very small and yellow.  Look closely in grassy areas with poor soils, and you’ll often see these tiny flowers.  It’s easy to miss, but there’s a good amount of it around. 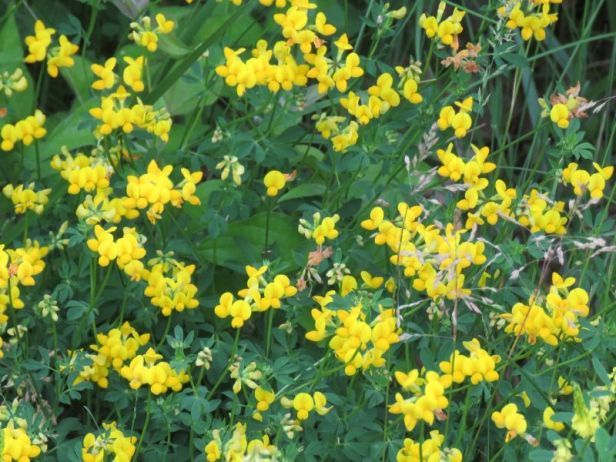 This plant is from the Pea Family, unlike the Clover Family plants we’ve seen so far.  It has 5-leaved clusters, though only 3 of the leaves are prominent, earning it the ‘trefoil’ name.  This invasive species is a favorite of honeybees and its curiously-shaped flowers are pleasing to look at, which earned it the name of Butter And Eggs in Britain.  I see it along roads and paths out in open areas.  I don’t think of it as a weed at all!

This legume plant is a very popular fodder plant today, having been used as animal feed since the ancient Greeks (often in the form of hay).  Its deep root system helps discourage erosion as well as fertilizing the soil with nitrogen.  And I think we can all agree it is pleasant to look at.  It too has 3-leaved clusters.  You can see whole fields of it planted as a crop, but I usually see it here and there in waste areas and along sunny fields.

6 thoughts on “Nature In Your Yard – Fodder Plants.”