This year I’ve decided to go with more ‘dynamic’ shots, and photos with stories… 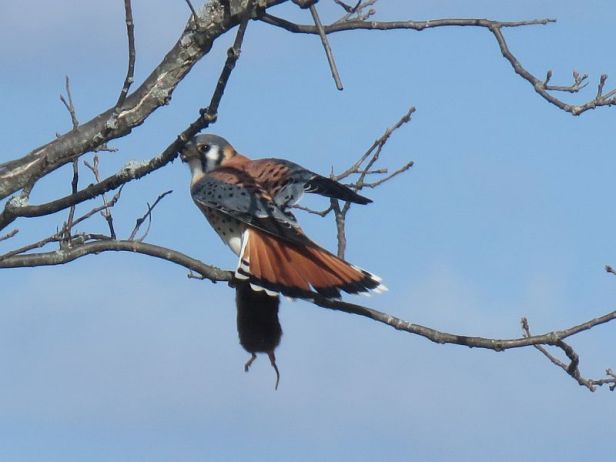 This American Kestrel (Sparrowhawk) has caught a chunky rodent- it took off as soon as it saw me, carrying its meal elsewhere.  As in most of my photographs, I can remember where I took it- at the entrance of Glacier Ridge Metro Park. 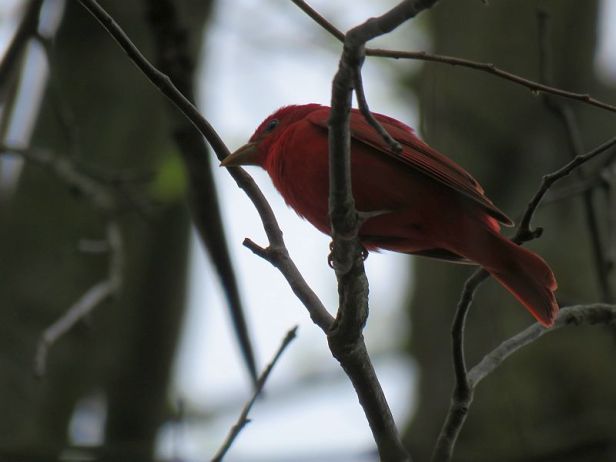 This male Summer Tanager was right above me at Blendon Woods Metro Park- I think this is the only decent shot of this species I got all year.  They are lovely birds, completely red with a good-sized yellow beak. 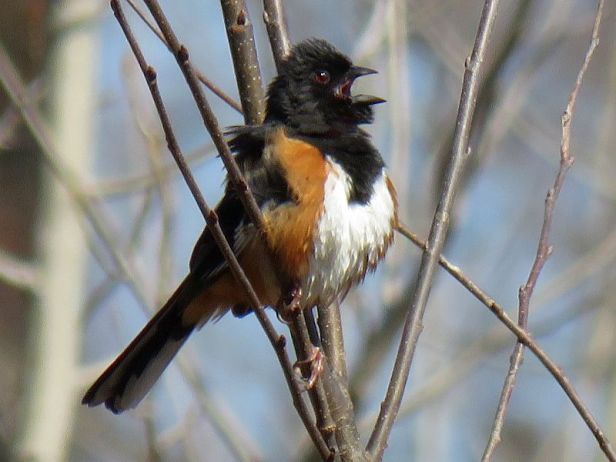 This male Eastern Towhee was really belting out his song in the early spring. 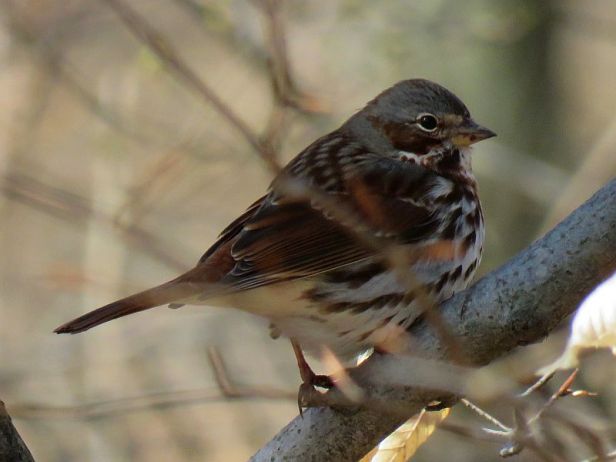 This is probably the best photo I’ve ever taken of a migrating Fox Sparrow, last April at Sharon Woods Metro Park. 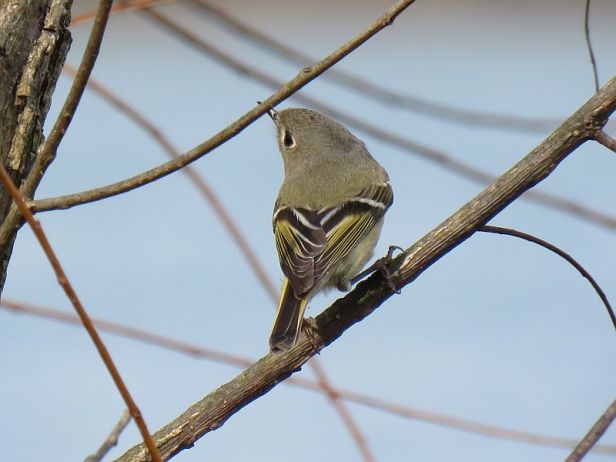 If you look closely at this little Ruby-Crowned Kinglet, you’ll see a tiny red spot on the crown of its head.  When they get agitated, they flash their red crown when they raise their feathers on their head.  I had a heck of a time getting a decent shot of this swiftly-moving bird at Prairie Oaks Metro Park last spring. 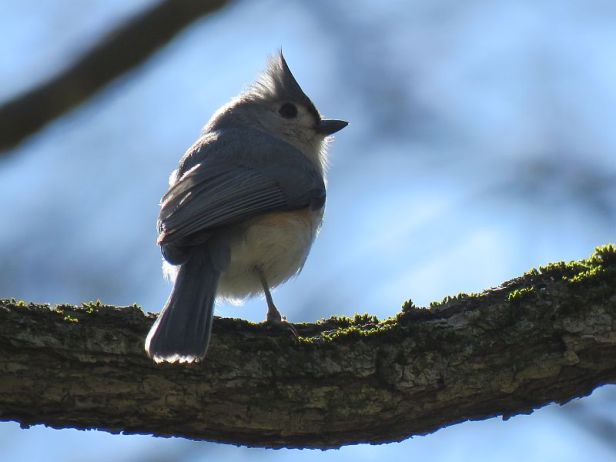 Speaking of smaller fast-moving birds…this Tufted Titmouse is also in that category.  I get a lot of blurry bad shots of them. 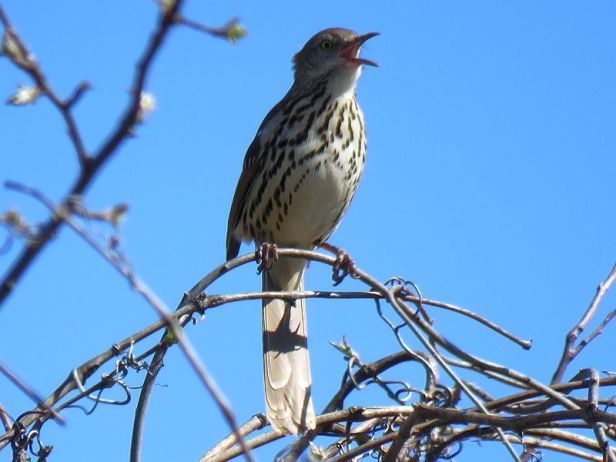 This Brown Thrasher was one of a few at Sharon Woods last spring singing its heart out, claiming territory in a large brushy field. 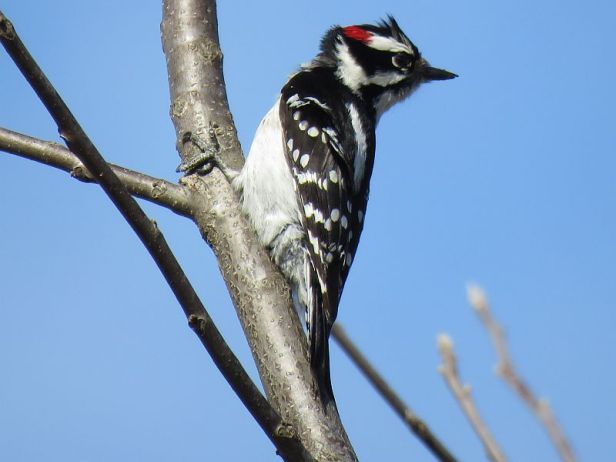 This male Downy Woodpecker posed nicely for me- he may have been courting a female at Kiwanis Park. 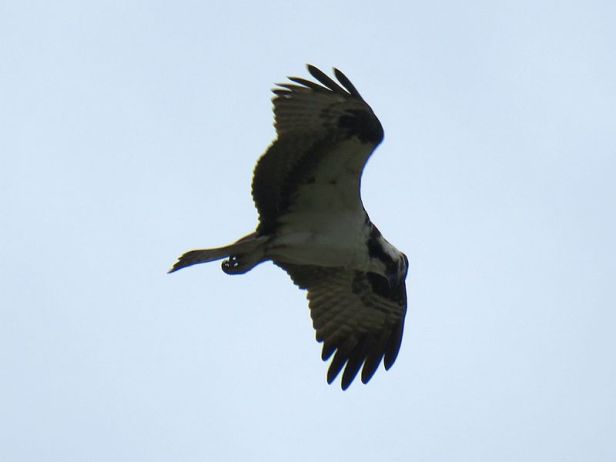 An Osprey (also known as a Fish Hawk) looking for prey above me at Alum Creek State Park. 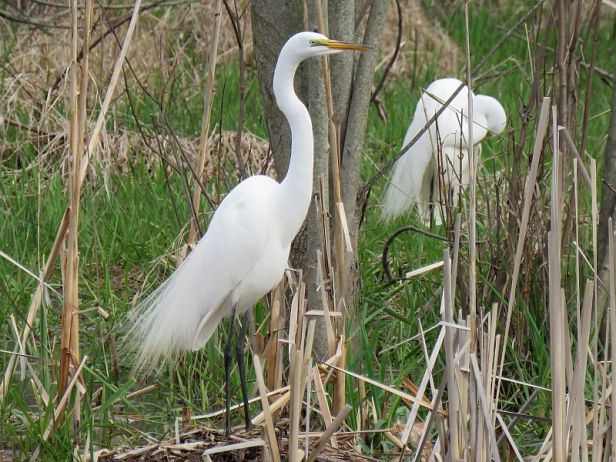 This beautiful Great Egret was one of several at Pickerington Ponds Metro Park. 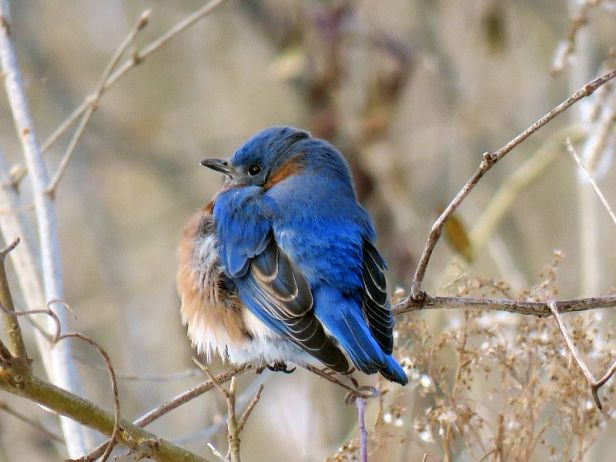 This Eastern Bluebird was one of a flock of 7 that was foraging for berries on a single-digit temperature day in January last year at Kiwanis Park.  Its brilliant colors brightened up a drab brown winter landscape. 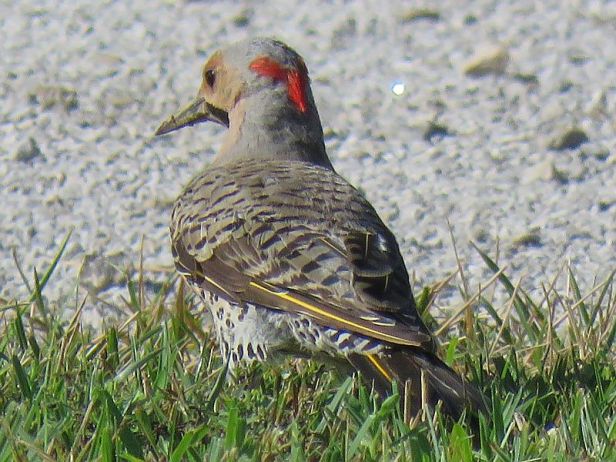 Eastern Flickers commonly feed on the ground, unlike other Woodpecker species.  They like ants. 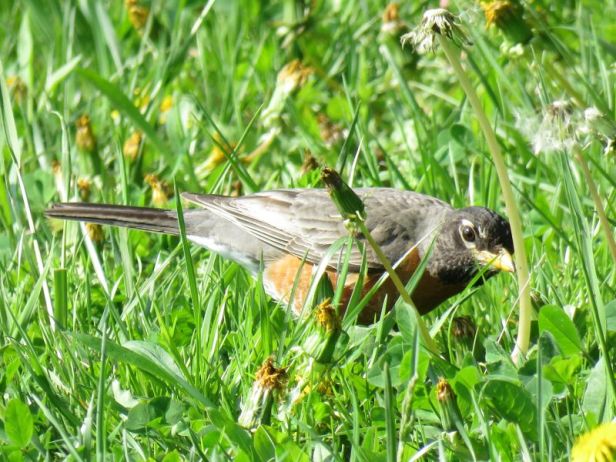 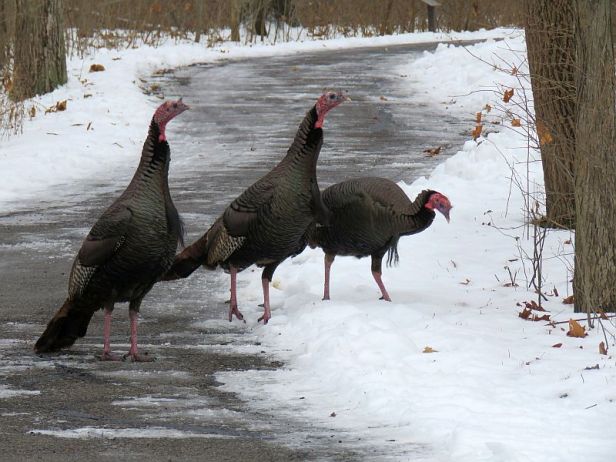 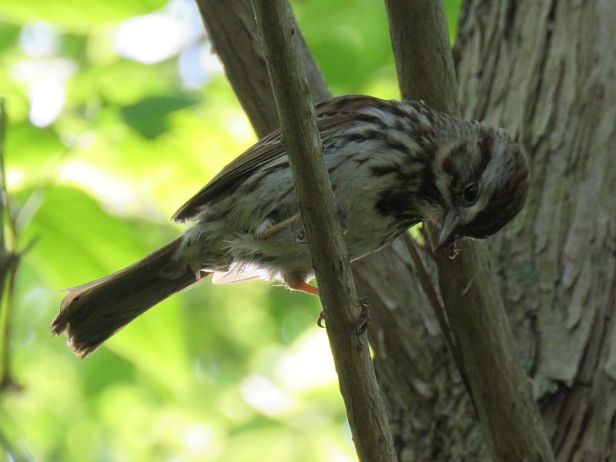 A Song Sparrow peers straight down. 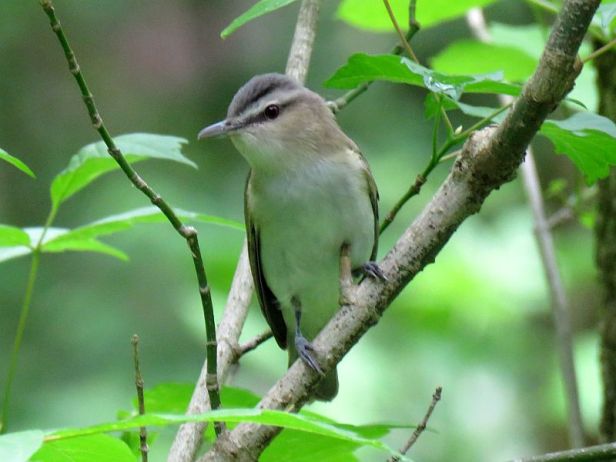 An unusual view of a Red-Eyed Vireo I saw out at Battelle Darby Metro Park.  This bird came down to eye-level only feet away from me as it hunted for food- usually they stay higher up in the trees. 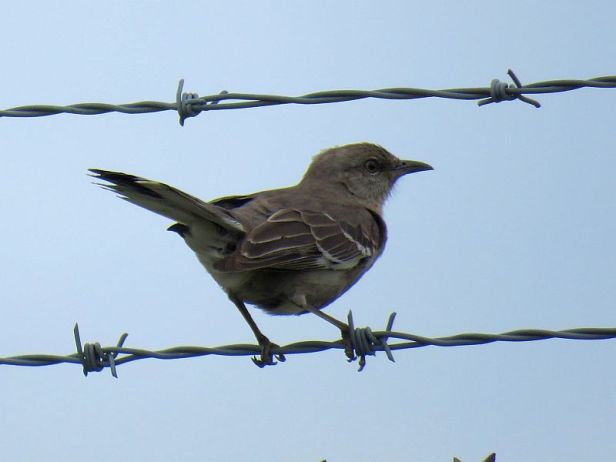 A Northern Mockingbird on territory at OSU’s Don Scott Airfield. 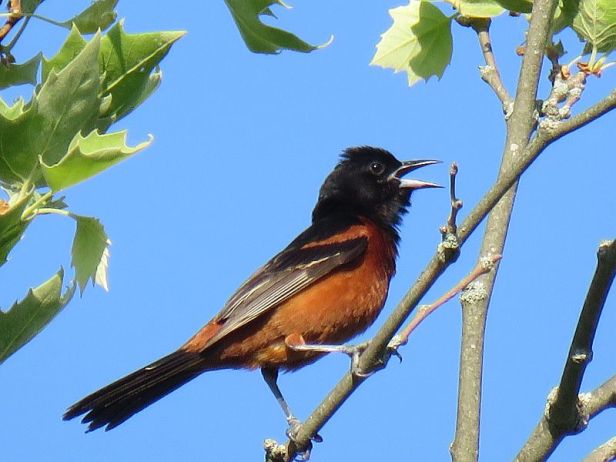 This male Orchard Oriole was singing up a storm out by the old Galbraith Racetrack at Battelle Darby Creek Metro Park. 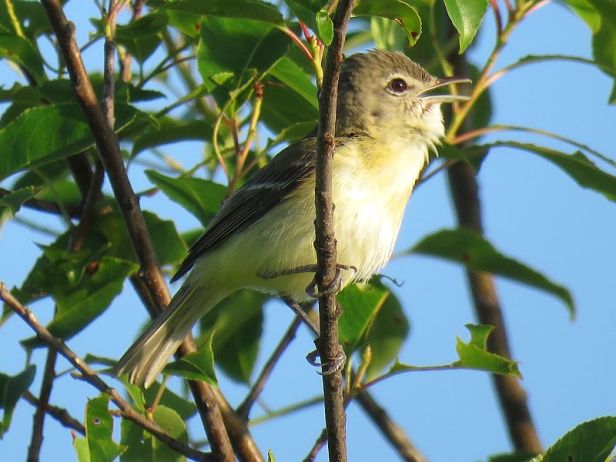 A Bell’s Vireo singing out at Battelle Darby Metro Park.  A pair nested there in the Kuhlwein Wetlands area last summer.  This species is making more and more visits as a breeding bird in central Ohio. 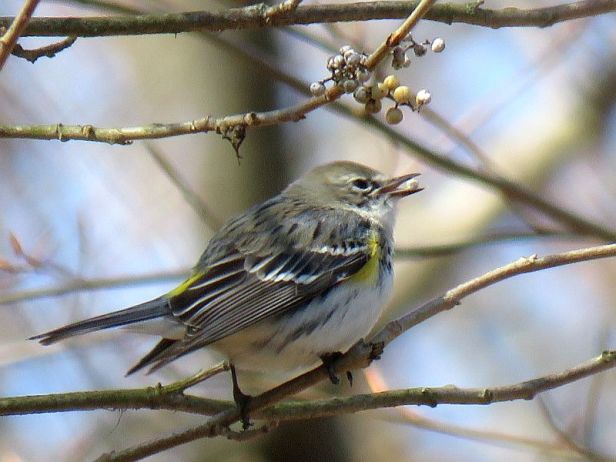 A female Yellow-Rumped Warbler eating poison ivy berries, one of their favorite foods. 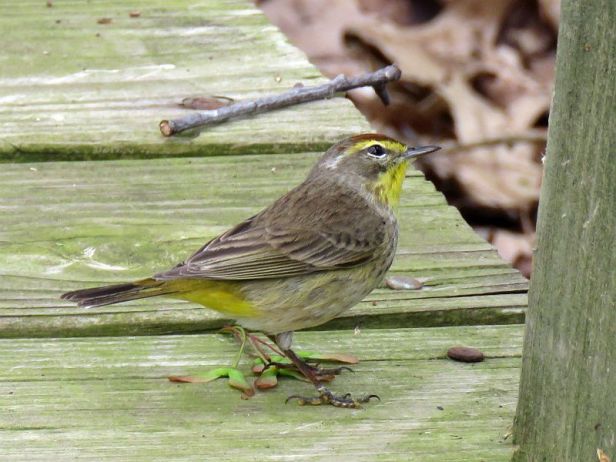 A Palm Warbler seen at Blendon Woods Metro Park during spring migration.  Palm Warblers are more likely to be seen foraging on the ground than most other Warblers. 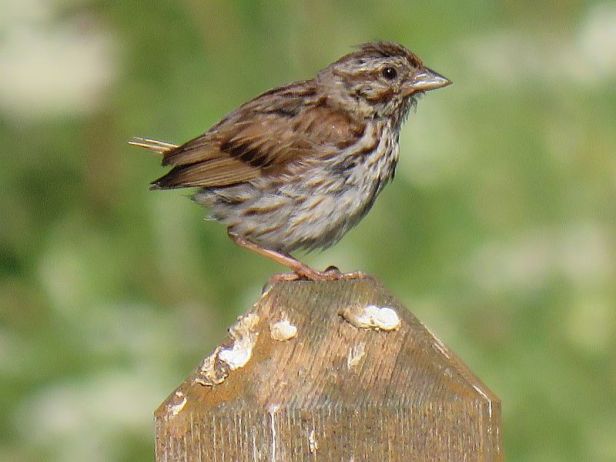 This Song Sparrow had lost its tail, most likely to some predator that missed making it a meal.  The tail feathers will grow back, hang in there, fella. 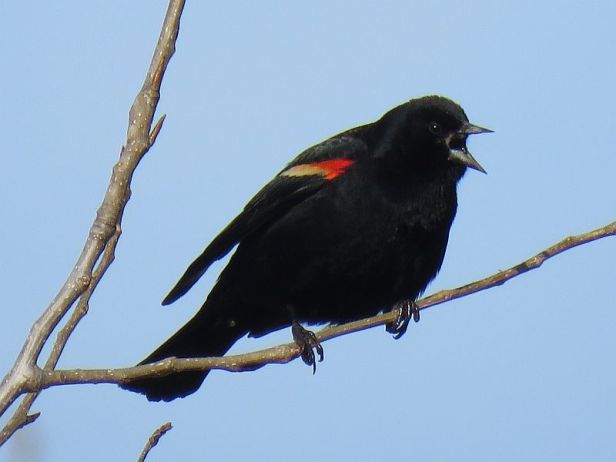 You can always count on Red-Winged Blackbirds to squawk their disapproval of your presence during their nesting season! 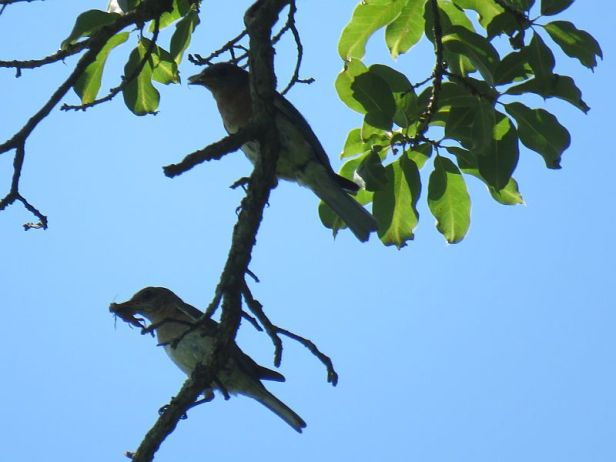 I felt sorry for this pair of Eastern Bluebirds.  A pair of House Sparrows were trying to take over their nest box and was keeping them away from their nest, which obviously had babies in it.  I hope they got to feed their offspring! 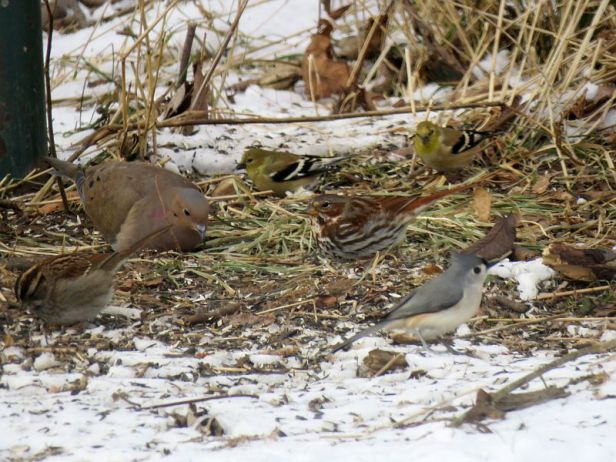 There are 5 different species of birds crowded around this popular feeder a year ago! 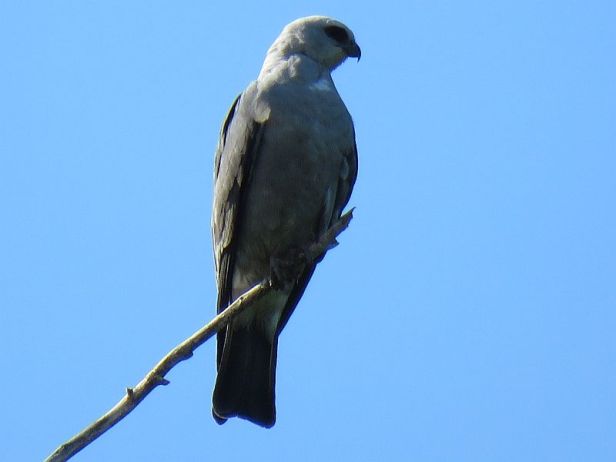 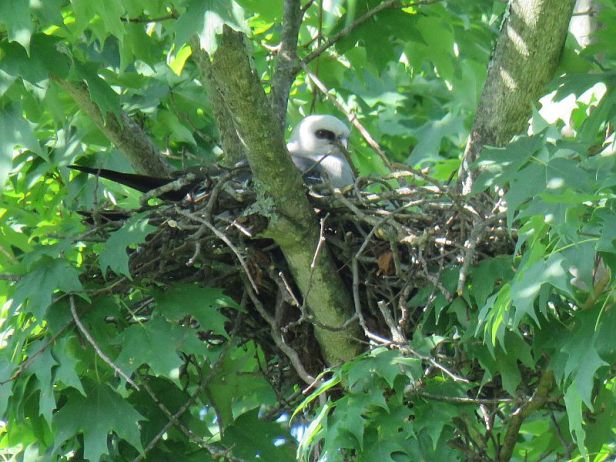 This is a pair of Mississippi Kites, raptors nesting in Chillicothe, Ohio.  They’ve been nesting there for a few years now.  This species is rarely seen in Ohio. 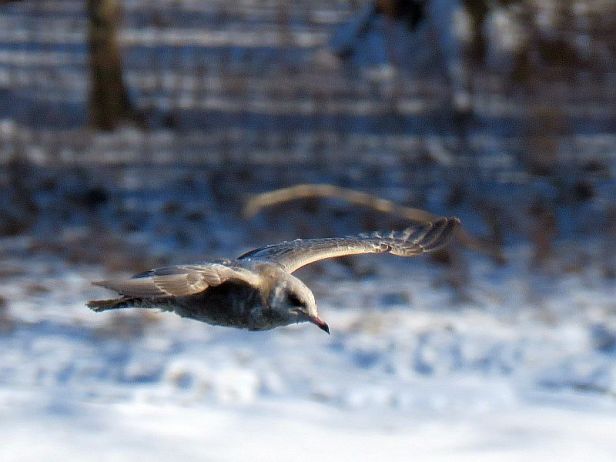 This is a Mew Gull, seen on New Year’s Day at Green Lawn Dam.  Unfortunately this rare visitor sickened and died. 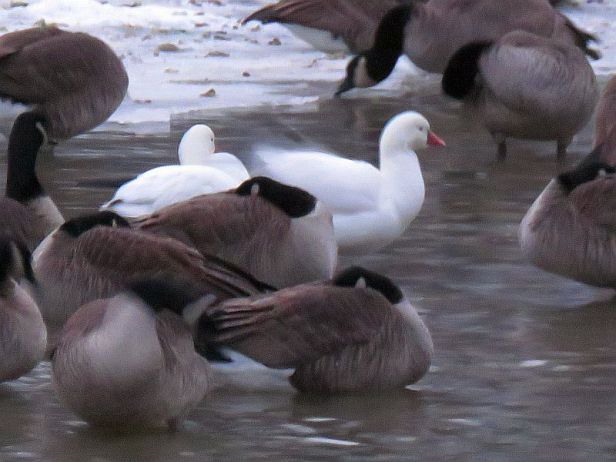 These are 2 Ross’s Geese, roosting for the night with a flock of Canada Geese.  I went out three days in a row in frigid windy weather to finally spot them.

So many pictures, so little space!