This is a blog post I am extremely happy to be able to post!  I- along with many other birders in the central Ohio area- have seen the rarest warbler in North America a week ago, thanks to a sharp-eyed child and the Internet.

Here’s the story I got from a birder friend.  A birder was walking with his young son at Battelle Darby Metro Park (an old favorite park of mine) at the western edge of Franklin County.  The young son pointed to a pretty bird on the fence along the trail they were walking.  The birder dad took a closer look, and realized what he saw.

The news went out online, on various Facebook groups, eBird, and the Ohio Birds Listserv.  People flocked to see the bird…including me.  I dropped everything and drove out there, not wasting any time.

Battelle-Darby is a large park- over 7,000 acres.  The particular area where the bird was hanging out was near the Nature Center, near the Bison fields.  I’ll talk about these features of this great park one day, but right now, there are more pressing things to discuss…

Yes, news travels fast in the Internet Age.  A crowd of excited birders are staking out the area where the bird had been seen since that morning- a treeline with a wooden fence in front of it.

And back in the treeline- there is the bird! 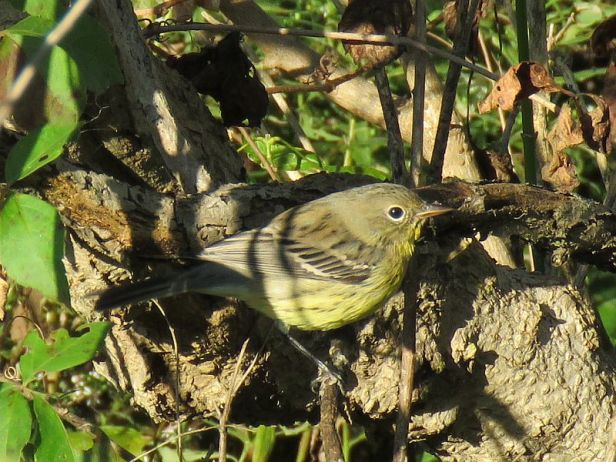 It worked its way among the bushes.

And then it perched on the fence, looking for things to eat in the nearby foliage.  This bird wasn’t scared of the crowd, 20 feet away, gazing in appreciation at her, and taking many pictures. 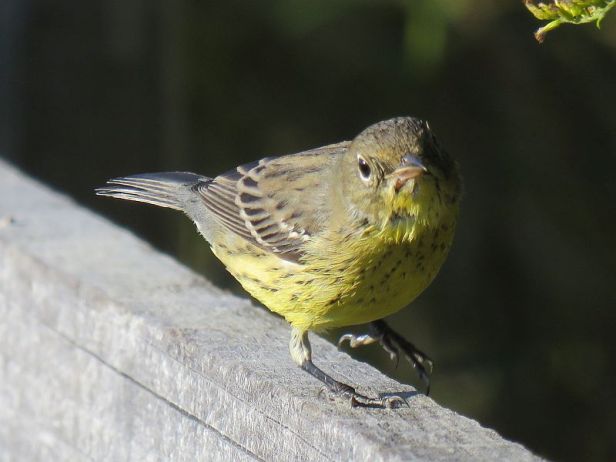 This bird caught small caterpillars as we watched.  This is a rare treat indeed.  I called my best friend, also a birder, and he drove like a maniac out to see and photograph the bird.  You owe me, buddy! 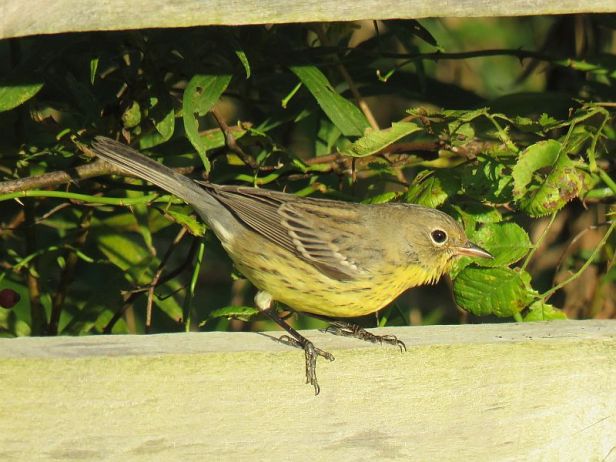 Kirtland’s Warblers are an endangered species.  The US Fish and Wildlife Service tells us that it has kept track of the numbers found- traditionally, nesting only in the jack pine forests of a certain age in Michigan- and there were as few as 400 of them in 1971.  In 2011, over 1,800 singing males were recorded, so they are making somewhat of a comeback.  This puts into perspective how few of these birds there are, and seeing one out of its small nesting grounds is rare. 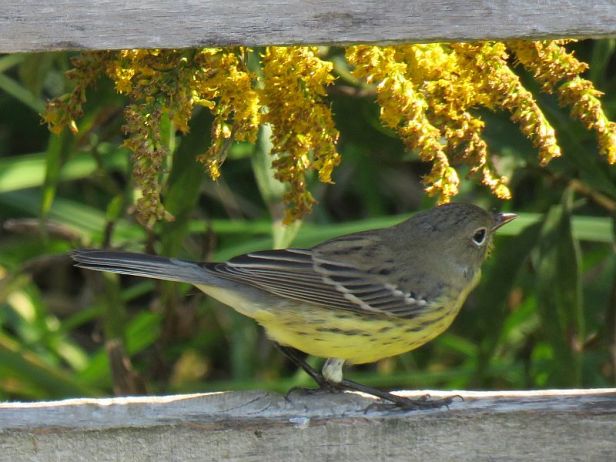 Primarily insect eaters, Kirtland’s warblers forage for insects and larvae near the ground and in lower parts of pines and oaks. They also eat blueberries.

Kirtland’s warblers nest only on the ground near the lower branches and in large stands of young jack pines that are 5 to 20 feet tall and 6 to 22 years old. The tree’s age is crucial, although biologists are not sure why. It is possible that the birds need low branches near the ground to help conceal their nests. Before the trees are six years old, the lower branches are not large enough to hide the nest. After 15 years, these lower branches begin to die.

Kirtland’s warblers require large stands of young, dense jack pine forest at least 80 acres in size, but they prefer stands of 300 to 400 acres, or larger. Their exacting requirements for nesting, as well as cowbird parasitism, caused a drastic decline in numbers and led the U.S. Fish and Wildlife Service to list the Kirtland’s warbler as an endangered species in 1967.

Until 1995 Kirtland’s warblers had only been known to nest in the northern part of Michigan’s Lower Peninsula. Today, they also nest in the Upper Peninsula, and since 2007, have nested in Wisconsin and Canada. They migrate from their nesting grounds to the southeastern coast of the United States on their way to wintering grounds in the Bahamas.

Once it was believed that forest fires harmed the environment. However, we now know that fires play an important role in forest ecosystems. For example, without fire, jack pine cones do not completely release their seeds. Suppressing forest fires prevented the natural establishment of new jack pine stands. Since Kirtland’s warblers will only nest in stands of young jack pines, the population dwindled dramatically before scientists realized that there is a role for fire in forest ecology — and in the Kirtland’s warbler life history.

The second greatest threat to Kirtland’s warbler survival is the brown-headed cowbird. Cowbirds lay eggs in other bird’s nests, leaving the unsuspecting hosts to incubate and care for the young cowbirds. This is called nest parasitism…

The U.S. Fish and Wildlife Service, in cooperation with the Michigan Department of Natural Resources, the U.S. Forest Service and the Michigan Audubon Society, initiated an aggressive cowbird removal program in 1972 that has continued to this day. As a result, Kirtland’s warblers now have very good nesting success and enough young are being produced to increase the population. 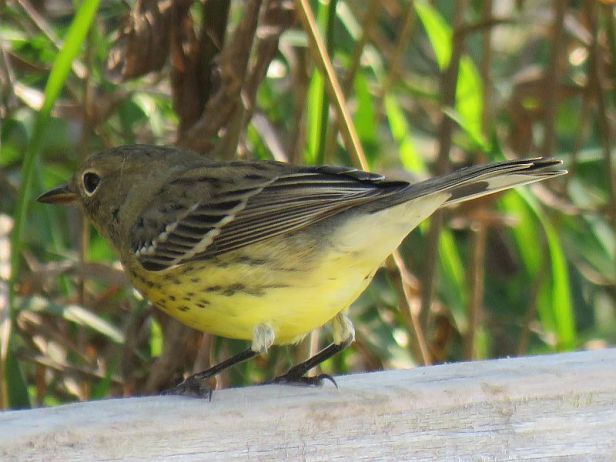 This young female is one of an estimated 3,600 Kirtland’s Warblers in the wild today, a number slowly increasing due to habitat management and Cowbird control in their area.

I always planned to go up to Michigan to see them on their breeding territory, but never expected to see one migrating through one of my favorite parks!

This bird was seen in the same area for 4 days, and then it was off to the Bahamas.  Good place to spend the winter if you ask me.

To date, this has been the most exciting life list bird I’ve seen.  I’ve seen 279 bird species in the state of Ohio now.