I read about a rare (for Ohio) sparrow this summer on the Ohio Birds Listserv.  It was seen in a suburb of Dayton, Ohio, not terribly far away from me.  And the park it was seen in sounded interesting as well.

So I decided to go look! 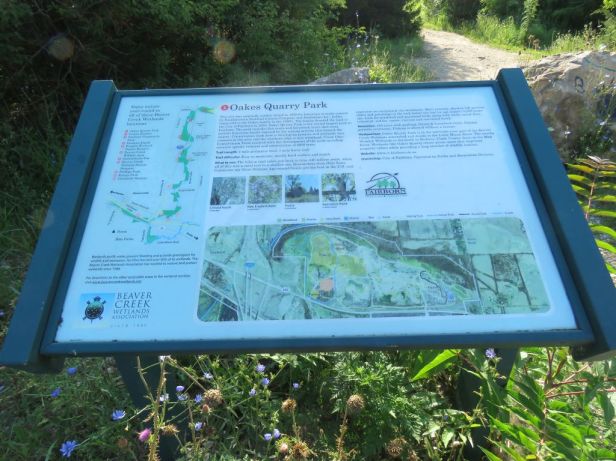 Oakes Quarry Park is located in Fairborn, Ohio, right outside of Dayton’s freeway outerbelt.  It is part of the Fairborn Parks system and is one of several locations under the stewardship of the Beaver Creek Wetlands Association of Greene County.

One of the first things I noticed hiking around Oakes Quarry Park is that it is more of a quarry-turned-park than a park.  There are remnants of stone quarry activity everywhere, along with a central wetlands area and some restored prairie. 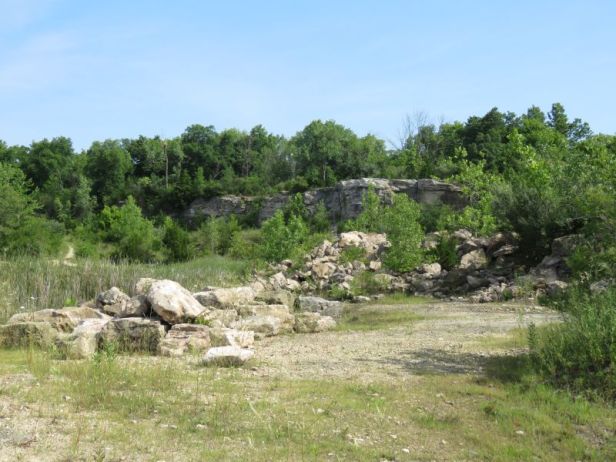 There’s a 30-foot overlook from a quarried stone wall around much of the park, with scattered stonework over much of the area.  The park is essentially a big bowl with a stony rim around it.  Narrow hiking trails and a horse bridle trail encircle the area.

This site was originally surface mined in 1929 for limestone to make cement by Southwestern Portland Cement Company and Southdown Inc., before being sold to the Oakes family in the 1990’s. The family donated the land to the City of Fairborn in 2003.

Oakes Quarry Park is the second largest park in Fairborn. The park includes foot trails and horseback trails that cross ancient limestone fossils exposed by the mining activity that formed the quarry. Conservation work here is developing prairies and wetlands once common in the area and the northern edge is nice woodland.

Clean Ohio Conservation Fund assisted with the development of the park including invasive species removal and reforestation of 8,000 trees.

The hiking trail takes you back in time 440 million years, when all of this was a coral reef in a shallow sea. Researchers from the Ohio State University say these Silurian Age crinoid fossils are the best in the U.S. and represent an exceptional site worldwide. More recently, glaciers left grooves, slides and polishings in the rock before the last ice age ended 14,000 years ago.

Glacial striation marks can be seen upon this rocky area- a layer of ice over a kilometer in height once covered over half of Ohio many thousands of years ago, and left its marks by advancing and retreating.

Sand was also common in the park, and plentiful bird tracks showed that sand baths are popular here. 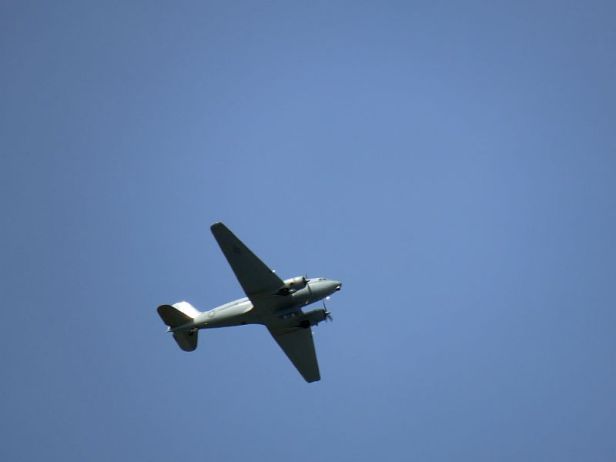 Close proximity to Wright-Patterson Air Force Base meant lots of airplanes in the sky, including some vintage planes.

There were all sorts of interesting dry-soil wildflowers to be seen, like this Thistle.

Butterflies were common visitors to the wildflowers. A Silver-Spotted Skipper sips upon an interesting wildflower I haven’t identified yet- I’ve only seen it in this park!

A Monarch Butterfly upon Blue Vervain

An Orange Sulfur upon Common Teasel 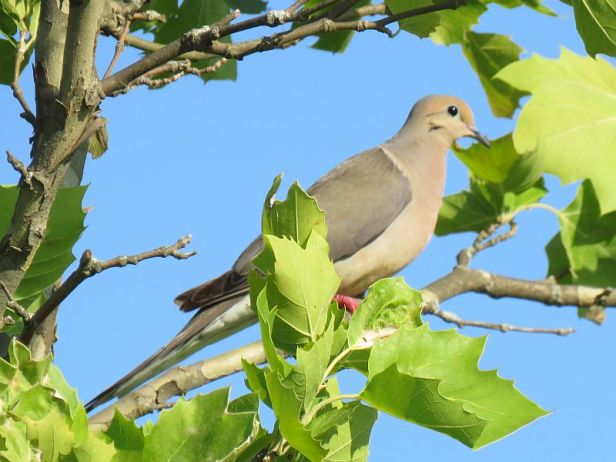 Birds of course were in the park- including Mourning Doves…

A male Eastern Towhee called from the shade 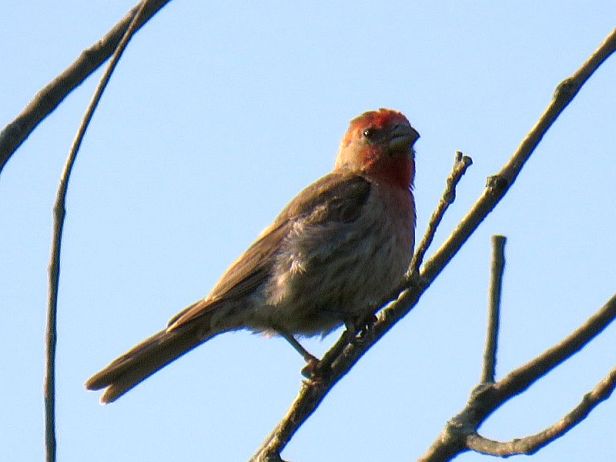 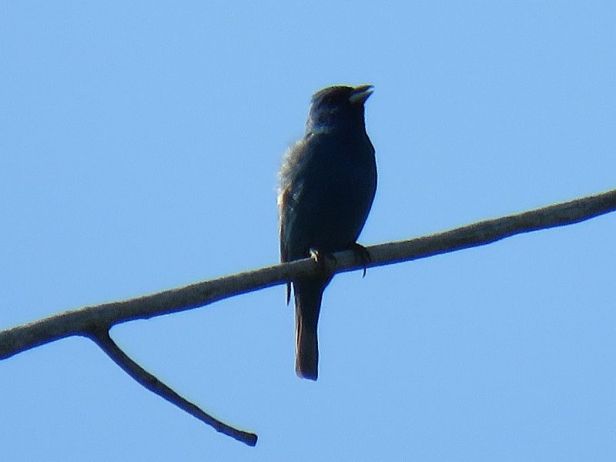 A male Indigo Bunting, a familiar Ohio summer bird singing from a perch 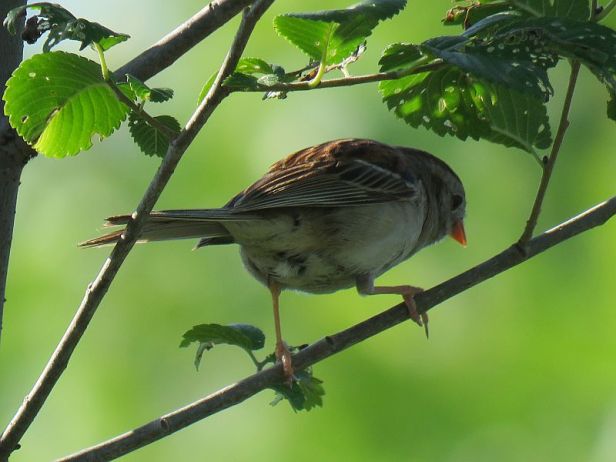 There was another sparrow I was looking for in this brushy area of the park- one that is rarely seen breeding  in Ohio. 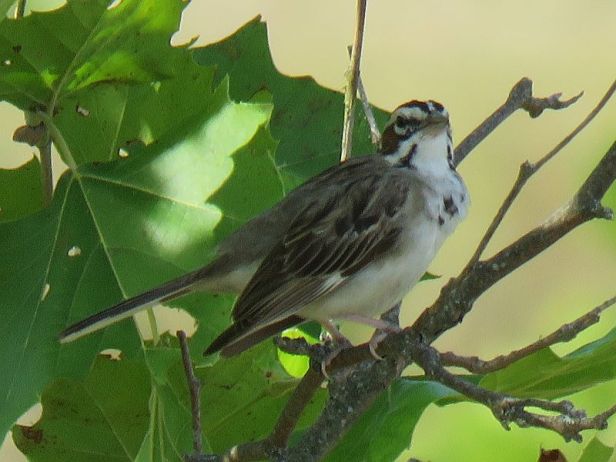 Suddenly, I spotted a large sparrow with white on its tail flying by, landing in a Sycamore Tree.  It was the bird I sought!

The bird sang its complex song- that along with its elaborate mask identified it as a Lark Sparrow.

This large sparrow may be brown, but its harlequin facial pattern and white tail spots make it a standout among sparrows. Males sing a melodious jumble of churrs, buzzes, and trills reminiscent of an Old World lark. Their courtship is also unusual, involving a hopping and crouching display unlike other sparrows. Lark Sparrows occur in the West and the Great Plains in prairies, grasslands, and pastures with scattered shrubs. In winter, look for them in small flocks in brushy areas.

I’m always happy to see a new life-list bird species, and it was a bonus to get a few very good photos as it sang.

Oakes Quarry Park was a very interesting place to visit- I’ll definitely be back, looking for some examples of its famed Crinoid fossils!

4 thoughts on “A Park that used to be a Quarry.”