During the third week of May, spring migration was on the down side.  Trees were fully leafed out, making it hard to see such spring favorites as Wood Warblers.  But not all migrants are in the forests.

Two notable species of birds were seen near a Columbus airfield- one a very rare visitor, the other a secretive migrant.  I went out to see if I could spot them. 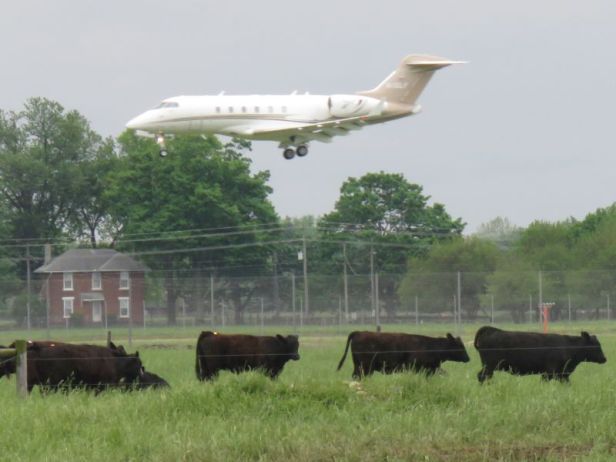 Don Scott Airfield is the property of Ohio State University, and surprisingly is the 3rd busiest airport in the state.  Surrounding it is OSU’s Livestock Facility.  Nature-wise, this means a lot of fields and grassland with a bit of woods off to the side.

Cows are plentiful and wonder what all of this birdwatching fuss is all about.

Unsure of the etiquette involved in being on the property, I wound my way along dirt roads until I finally saw a collection of cars in the middle of nowhere.  Jackpot!

Rule number one when looking for a rare bird- find the other birders at the site.  Chances are they are where the bird is (or has been recently).  They tend to be folks who know what they are doing (OK, there are exceptions but rarely).

I met some familiar faces- local birders tend to turn up a lot at these kinds of things- and sure enough, they were right where I wanted to be.  Michelle, Ed and Sheila were a few birders whom I know, and we all talk shop.  I can imagine novice birders thinking we are talking too much.  But hey, birding is often a solitary hobby and it’s always good to blow off the dust and swap tales of events since we all last met.  I can imagine frontiersmen at their annual gatherings knowing just what I’m talking about 🙂

The cows are interested too.  In perhaps getting a treat…

Along this stretch of fencing (where the birders gathered) was the main bird I came to see.  It was fairly close to us and didn’t seem to worry.

This is a handsome bird with its yellow-tinted belly, olive brown wings and gray head.  They aggressively defend their nests from predators and other Flycatchers, but can be found nesting near other birds that are no threat to them.  A nice thing to note is that these birds have apparently flourished due to human activity such as planting trees on the Great Plains, clearing woodlands, and erecting fences and telephone poles which they like to perch on.

Our rare bird fluttered out to catch insects on the wing, returning to the fence afterwards.  After lookinjg for Warblers in the woods it was noce to see a bird out in the open!

This grassland habitat hosted other birds-

A Savannah Sparrow (another grassland dweller)  that was singing on territory

A male Bobolink, always fun to see and hear in fields in the summertime

Many of us birders decided to walk around and down along the airfield fence, having heard another grassland bird singing…

…and sure enough, there it was upon the fence surrounded by Eastern Kingbirds… 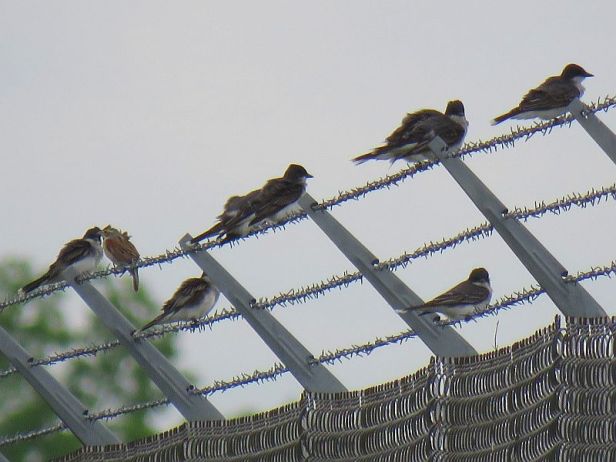 Notice the bird facing the opposite way 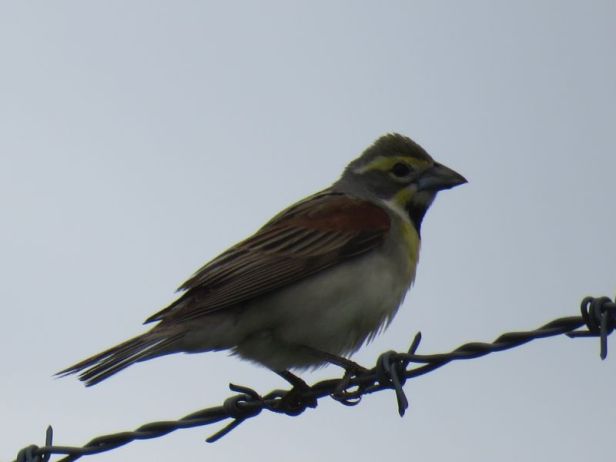 This is a Dickcissel, and they sing like their name- ‘dick-dick-sisisis’

Where would we be without fences for birds to perch upon?  This had been a good day, with sightings of all sorts of grassland birds, including the Western Kingbird.  But it wasn’t over yet.  One of the birders heard a bird that is rather hard to see.  Then, even better, this bird flew directly overhead and he shouted out to the rest of us to look up-

This is an uncommon look at an Upland Sandpiper, a bird that was migrating to Canada to breed in the summer.  Unlike most Sandpipers, it prefers a grassland habitat- often being found at airports.  This bird was considered a delicacy and used to be hunted until the 1918 Migratory Bird Treaty.  It’s not as common as it once was, but it is holding its own numbers-wise now.

This sighting capped off a grand birding day indeed.  There are different sets of birds in different habitats, so you’ll often see different birds in the fields than you do in the woods.  I’m so used to concentrating upon woods and wood edges that it was refreshing to get out into a more wide-open setting, with good birders and birds both in abundance.

8 thoughts on “Two Life List Birds Seen Near an Airfield.”