Last month, I shared photos from the first part of my Lake Erie jaunt with a birding buddy.  Now I’ll wrap up the highlights of the rest of the trip.

After leaving our Maumee Bay ‘cabin’ and making our roundabout touristy-out-of-the-way back towards home, we stopped at East Harbor State Park to do some more birding.  Located on the shore of Lake Erie, we took a scenic walk.

We spotted a patch of Wild Columbine, one of the showier and rarer spring wildflowers in Ohio 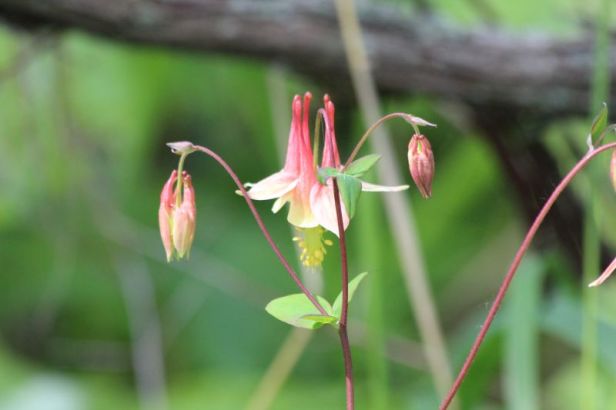 Two birds we saw a lot of- Baltimore Orioles… 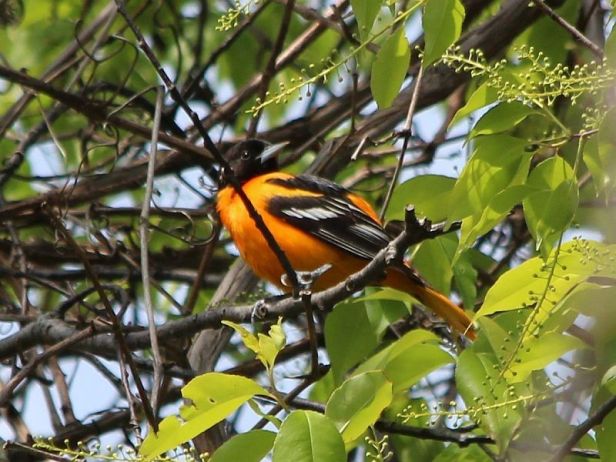 And there were more White-Crowned Sparrows to see as well

…and Double-Crested Cormorants, an invasive waterfowl

We moved on…and this is as good a place as any to post a few pictures snapped as we traveled.

Tourist towns have a charm about them 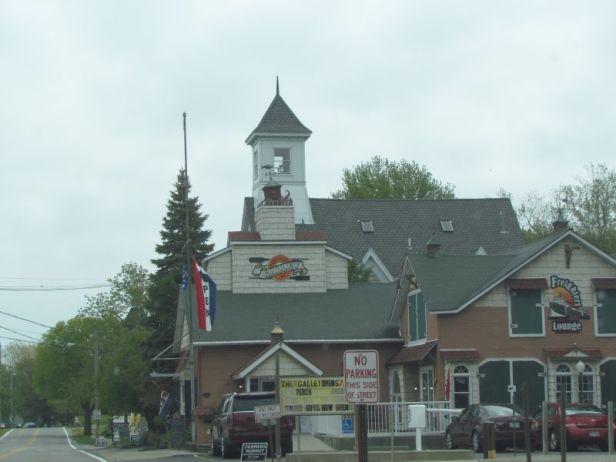 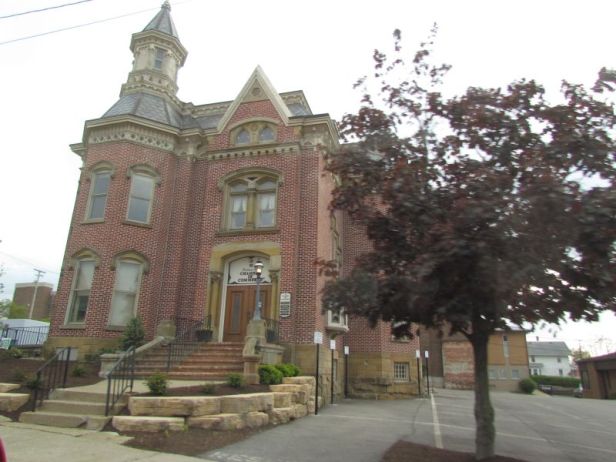 Some houses stand out 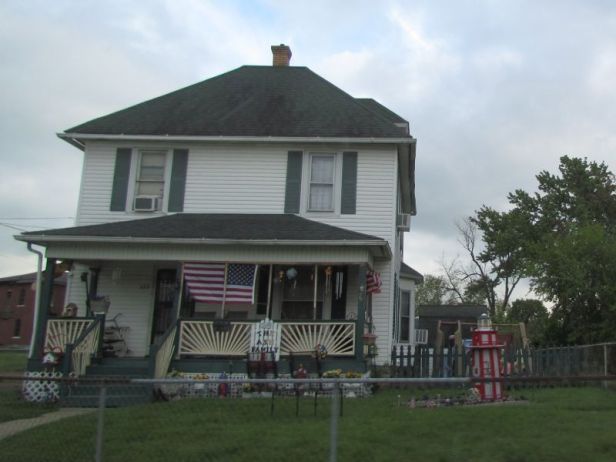 OK, back to the tourist attractions 🙂  Around noon we stopped at Marblehead Lighthouse State Park.

Marblehead Lighthouse is the oldest, continuously operating lighthouse on the Great Lakes. It has been featured on a U.S. postage stamp, has appeared on Ohio’s license plates, and is now part of the Ohio State Parks system.

The history of this popular lighthouse began in 1819 when the fifteenth U.S. Congress allocated $5,000 for the construction of a light tower on the Marblehead Peninsula to guide vessels into Sandusky Bay and to help them safely transit the treacherous southern passage that runs between the Ohio mainland and a cluster of offshore islands.

William Kelly and a crew of two men began construction of the conical tower in September 1821 on an outcropping of limestone on the northern tip of the peninsula, and in November, the rocky shoreline was home to a fifty-foot tower with wooden ladders leading to its lantern room. The base of the tower was twenty-six feet in diameter with walls five feet thick, while the top measured twelve feet in diameter and had two-foot-thick walls. The tower was constructed of limestone, quarried nearby on the peninsula.

Marblehead Lighthouse cost $7,232 to build and was the only navigational aid in the Sandusky Bay region for many years; in fact, the tower was called “Sandusky Bay Lighthouse” until 1870. Its first beacon consisted of thirteen small whale oil lamps with round wicks set in sixteen-inch reflectors. 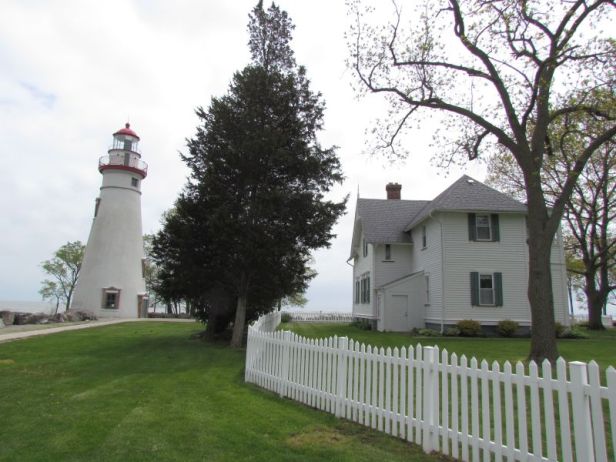 Benajah Wolcott, Marblehead’s first keeper, was a Revolutionary War veteran and one of the first settlers on the peninsula. Wolcott purchased 114 acres in 1809 and built a log cabin for his family. Fearing an invasion by the British, the Wolcotts left the peninsula during the War of 1812 but returned to their homestead when the conflict was over. Benajah Wolcott was appointed keeper on June 24, 1822 and thus had use of the stone dwelling built adjacent to the lighthouse, but he also had William Kelly construct a small, limestone home on his homestead on the Sandusky side of the peninsula. Wolcott’s personal dwelling is the oldest residence still standing in Ottawa County, and is touted as a fine example of a “hall and parlor house.” Known as the Keeper’s House, the structure is operated as a museum by the Ottawa County Historical Society.

Each evening during the shipping season, Benajah Wolcott would climb the lighthouse to light its thirteen lamps and then faithfully tend the light until the following morning. In addition to minding the light, Wolcott also kept a record of ships that passed, noted weather conditions, and organized rescue efforts.

Keeper Wolcott had served for ten years when he passed away due to cholera in 1832. Upon his death, his wife Rachel took over his duties, making her the first female lighthouse keeper on the Great Lakes. After keeping the light for two years, Rachel married Jeremiah Van Benschoten, who became the light’s third keeper. 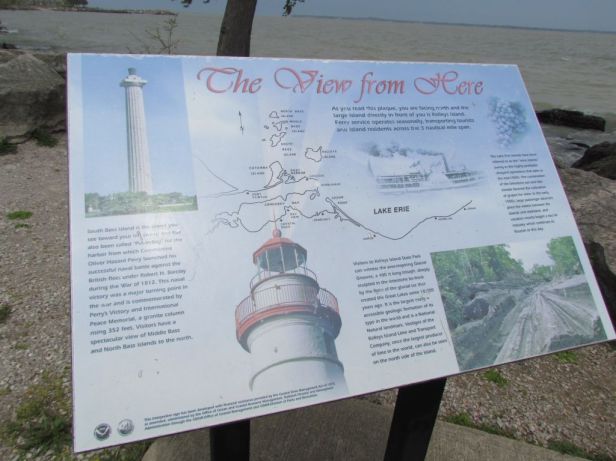 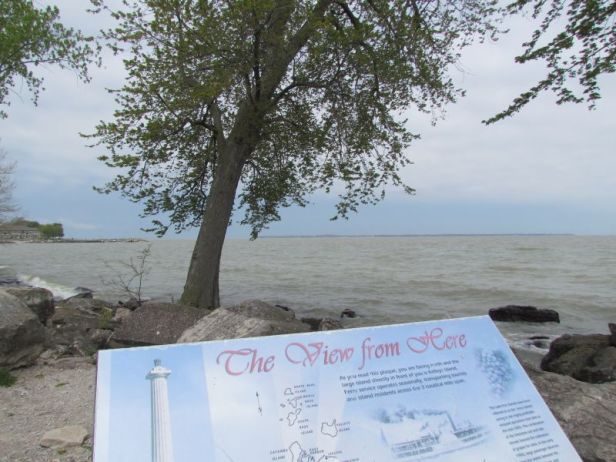 The view of the lake was indeed interesting 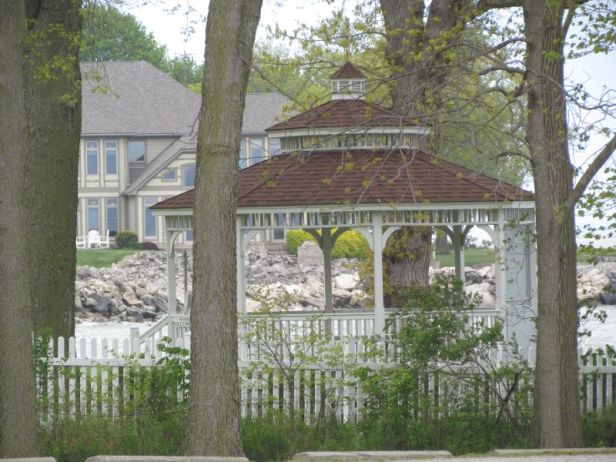 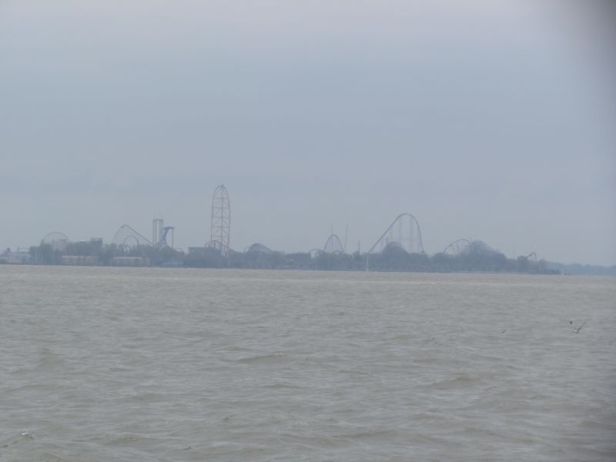 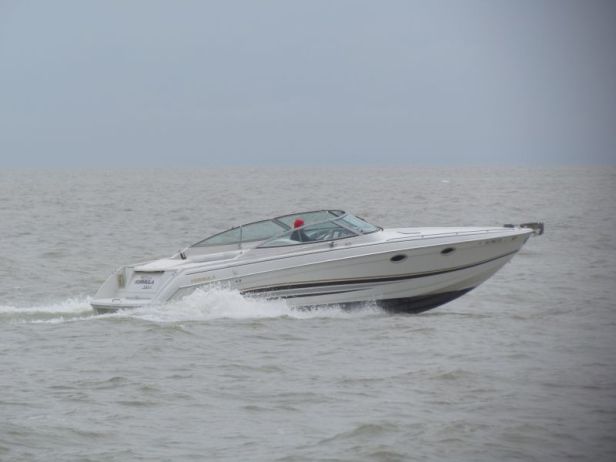 And there were birds here too, of course.

Red-Breasted Mergansers were nearby in the water 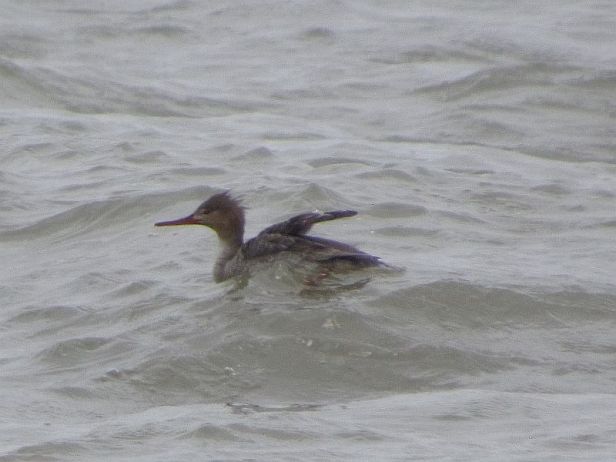 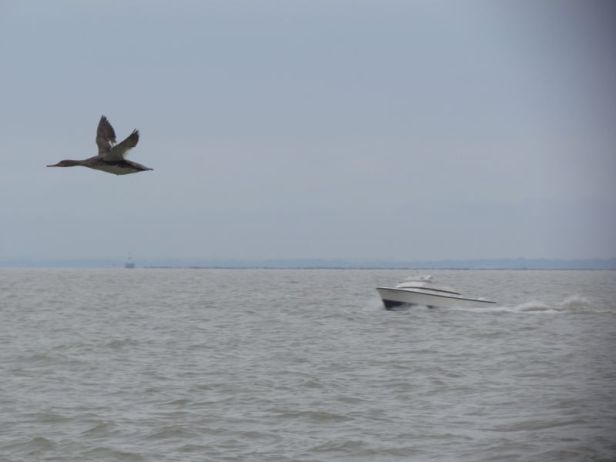 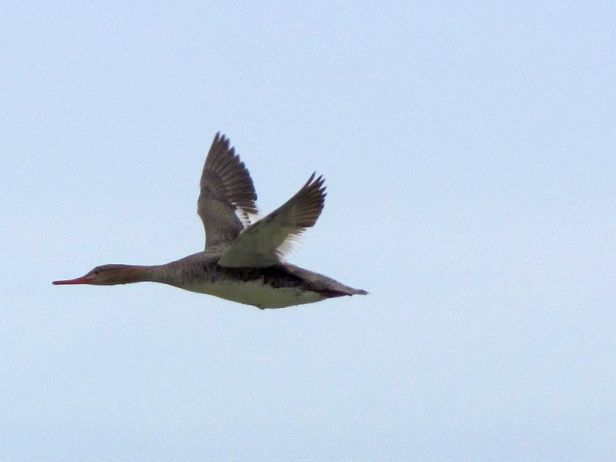 Meanwhile, on the shore, a Red-Winged Blackbird was looking for a mate… 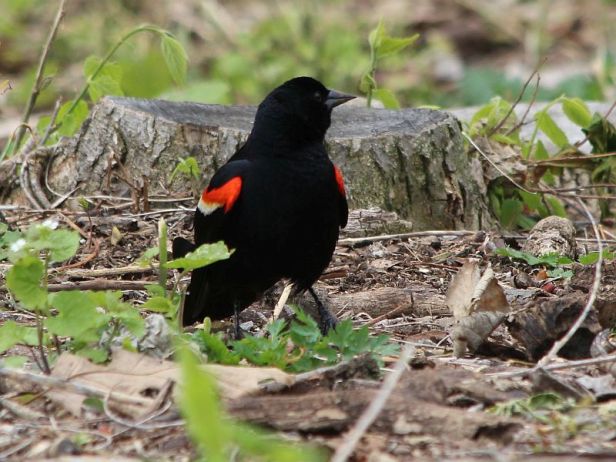 …and got temporarily stuck in the picket fence while displaying, causing some merriment! 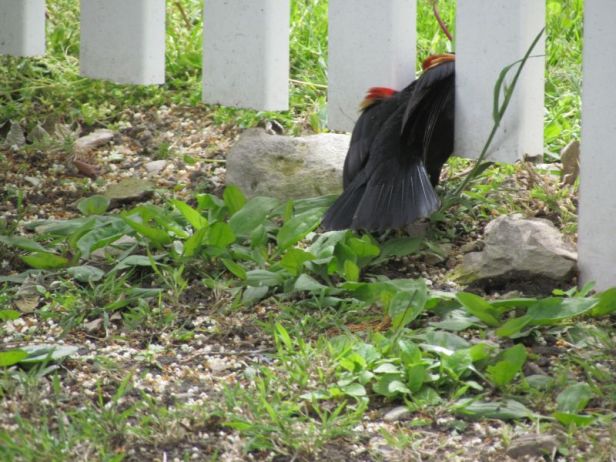 A Barn Swallow collected grass for a nest 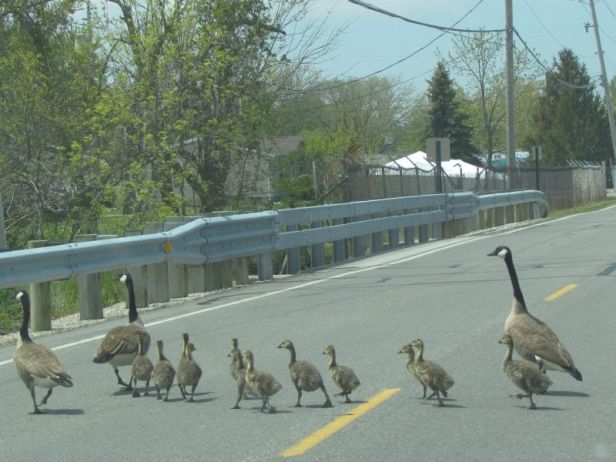 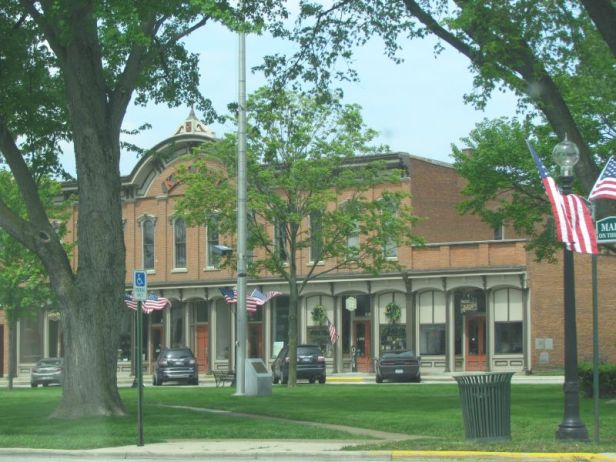 The Thomas A. Edison Birthplace Museum was our destination.

Thomas Alva Edison (February 11, 1847 – October 18, 1931) was an American inventor and businessman, who has been described as America’s greatest inventor. He developed many devices that greatly influenced life around the world, including the phonograph, the motion picture camera, and the long-lasting, practical electric light bulb. Dubbed “The Wizard of Menlo Park”, he was one of the first inventors to apply the principles of mass production and large-scale teamwork to the process of invention, and because of that, he is often credited with the creation of the first industrial research laboratory.

Edison was a prolific inventor, holding 1,093 US patents in his name, as well as many patents in the United Kingdom, France, and Germany. More significant than the number of Edison’s patents was the widespread impact of his inventions: electric light and power utilities, sound recording, and motion pictures all established major new industries worldwide. Edison’s inventions contributed to mass communication and, in particular, telecommunications. These included a stock ticker, a mechanical vote recorder, a battery for an electric car, electrical power, recorded music and motion pictures. His advanced work in these fields was an outgrowth of his early career as a telegraph operator. Edison developed a system of electric-power generation and distribution[5] to homes, businesses, and factories – a crucial development in the modern industrialized world. His first power station was on Pearl Street in Manhattan, New York.

Thomas Alva Edison, inventor of the phonograph, the incandescent light bulb, and many other devices that make our lives fuller and simpler, was born in Milan, Ohio, in 1847. The Edison Birthplace Museum features a collection of rare Edisonia, including examples of many of Edison’s early inventions, documents, and family mementos… 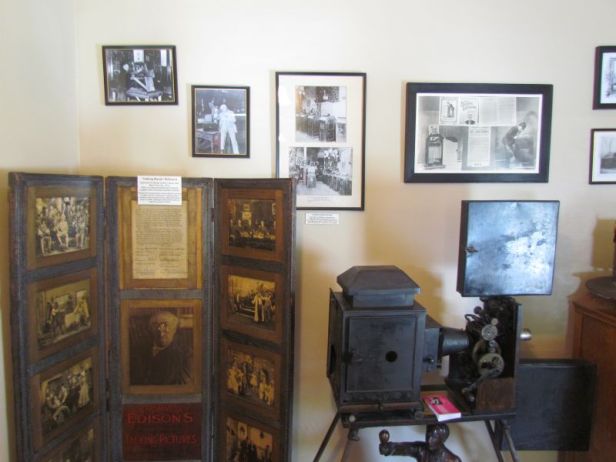 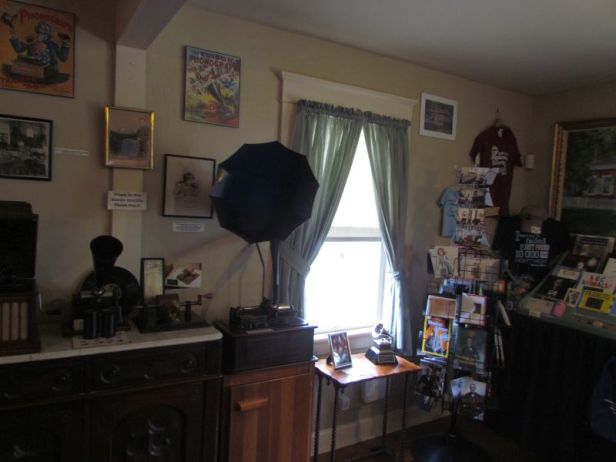 The volunteer guides were very knowledgeable and gave us a tour

Edison’s parents sold the house in 1854, and the family moved to Port Huron, Michigan. The Birthplace was out of family ownership for the next forty years. In 1894, Edison’s sister, Marion Edison Page, bought the house and added a bathroom and other modern conveniences. Edison became the owner of his birthplace in 1906, and, on his last visit, in 1923, he was shocked to find his old home still lighted by lamps and candles! After the death of Thomas A. Edison from complications of diabetes on October 18, 1931, opening his birthplace to the public as a memorial and museum became the private project of his wife, Mina Miller Edison, and their daughter, Mrs. John Eyre Sloane. The Edison Birthplace Museum opened on the centennial of the inventor’s birth in 1947.

The house has been restored as nearly as possible to its 19th Century appearance. Because much of the Edisons’ original furniture was lost in moves and to a disastrous fire at their Port Huron Home, it was impossible to assemble much of the original furniture. Therefore, gifts and loans from members of the family have been supplemented by gifts and loans from friends and, in some cases, purchases of household articles of the period. 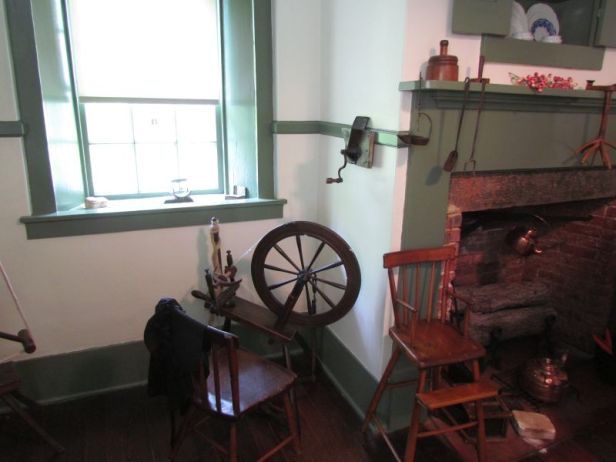 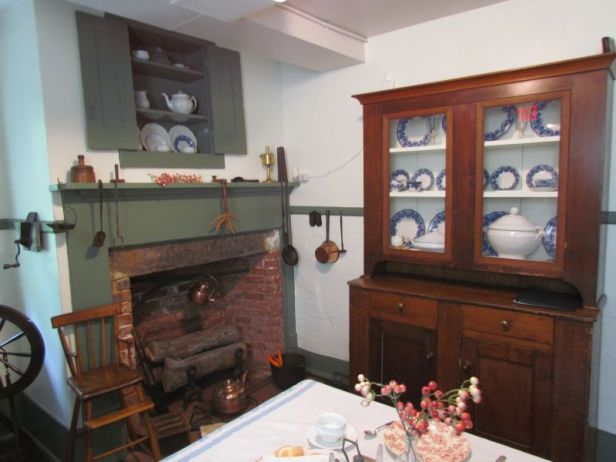 What a trip!  Birds, parks, lakeshores, scenery, history- you can’t beat that.  And a good time was had by all.