A fairly common tree that can be seen here in Ohio and in the eastern United States is the Black Walnut Tree, a large deciduous tree that can grow over 100 feet tall and can live for around 130 years.  This is a very useful tree, too. 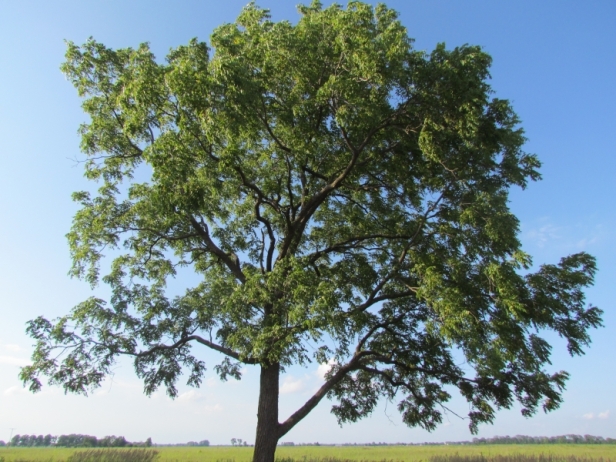 While its primary native region is the Midwest and east-central United States, the black walnut was introduced into Europe in 1629. It is cultivated there and in North America as a forest tree for its high-quality wood. Black walnut is more resistant to frost than the English or Persian walnut, but thrives best in the warmer regions of fertile, lowland soils with high water tables. Black walnut is primarily a pioneer species similar to red and silver maple and black cherry. It will grow in closed forests, but needs full sun for optimal growth and nut production. Because of this, black walnut is a common weed tree found along roadsides, fields, and forest edges in the eastern US. 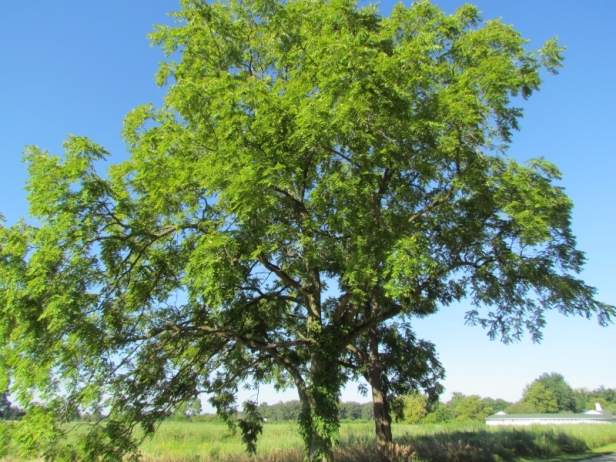 From a distance, Black Walnuts look slightly ‘feathery’ due to their finely divided leaves.  When they grow out in the open, they tend to spread out quickly from the central trunk- though in forests, they are quite a bit narrower (and taller). 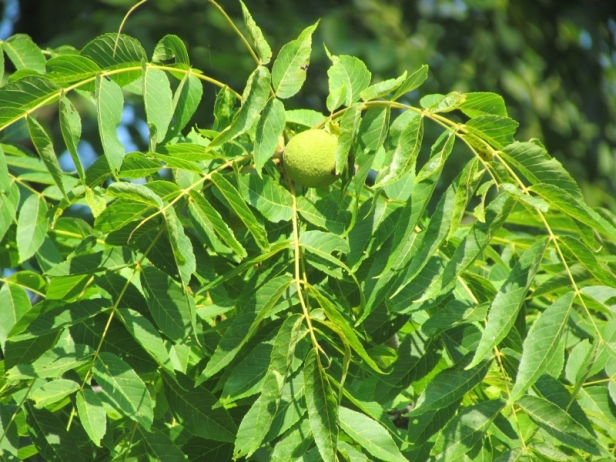 The leaves are what naturalists call ‘oddly pinnate’, meaning that a large number of small leaflets grow at intervals along the stem in an odd number- there are 15-23 leaflets per stem. 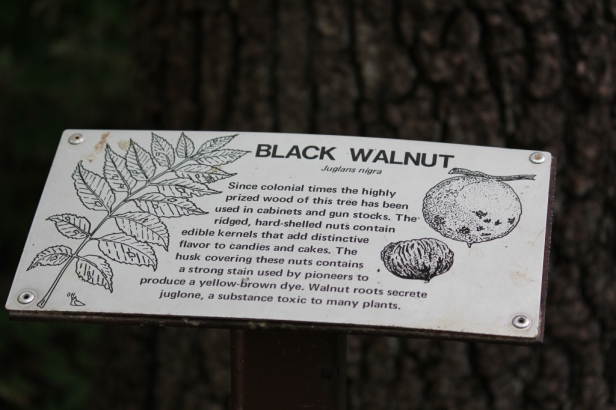 Black walnut is highly prized for its dark-colored, true heartwood. It is heavy and strong, yet easily split and worked. Walnut wood has historically been used for gunstocks, furniture, flooring, paddles, coffins, and a variety of other wood products. Due to its value, forestry officials often are called on to track down walnut poachers; in 2004, DNA testing was used to solve one such poaching case, involving a 55-foot (16-m) tree worth US$2,500. Black walnut has a density of 660 kg per cubic meter (41.2 lb/cubic foot), which makes it less dense than oak. 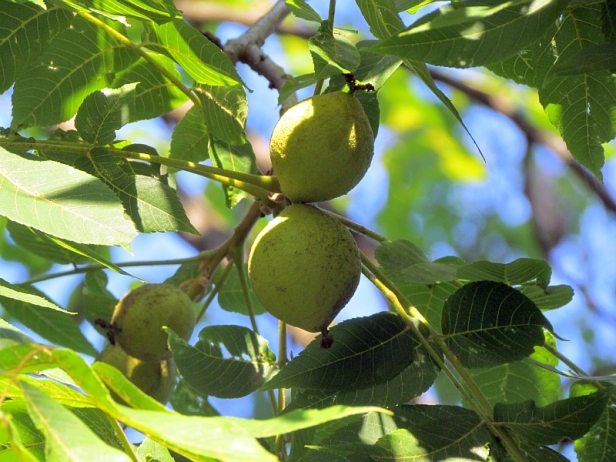 The fruit of this tree are the classic walnut, chock-full of good nutrients such as unsaturated fat and protein.  The husks produce a yellow-brown dye.  These are large-sized fruit, and when they are dropping off trees they can hit pretty hard on the ground, somewhat alarmingly so if you happen to be walking under the tree. 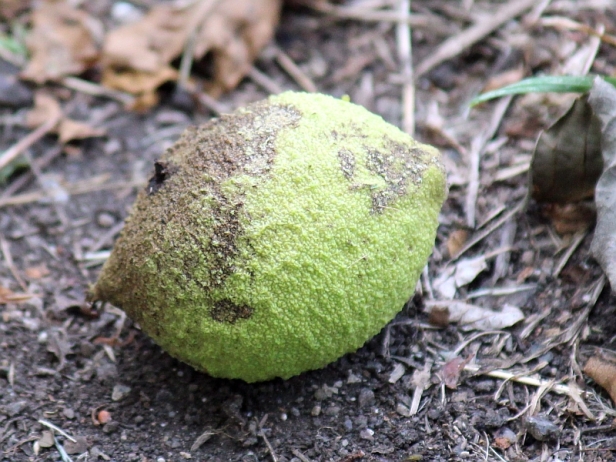 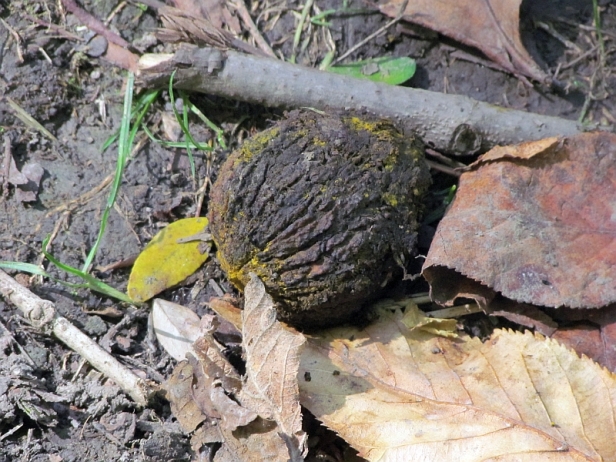 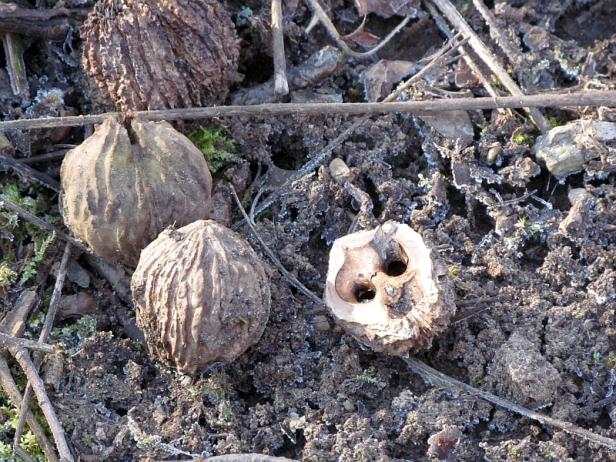 As you can see, a walnut has a leathery green covering, an inner husk and then the kernel (inside the ‘pig nose’ shaped core).  That takes some work to get at… 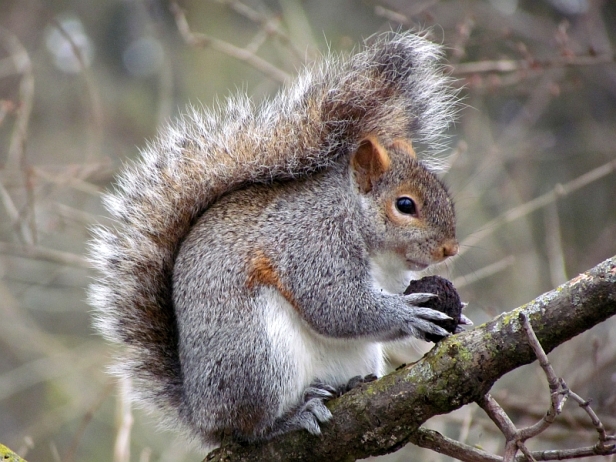 …but some critters love them!  Walnuts are good food for forest dwellers, they help to replace the dwindling numbers of Oaks that provided lots of acorns to fellows like this squirrel.  Every so many years there seems to be an especially good bumper crop of walnuts. 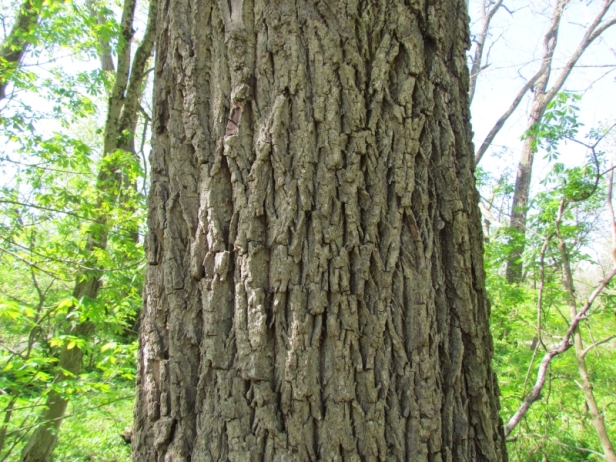 Here’s a close look at the trunk- it has coarse and rugged bark.  Fun fact- these trees can be tapped like Maples for the sweet sap within. 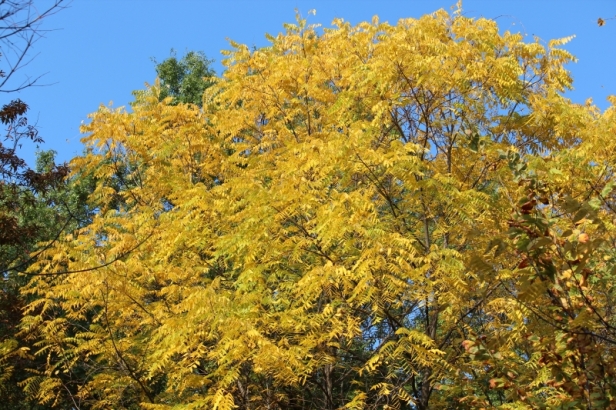 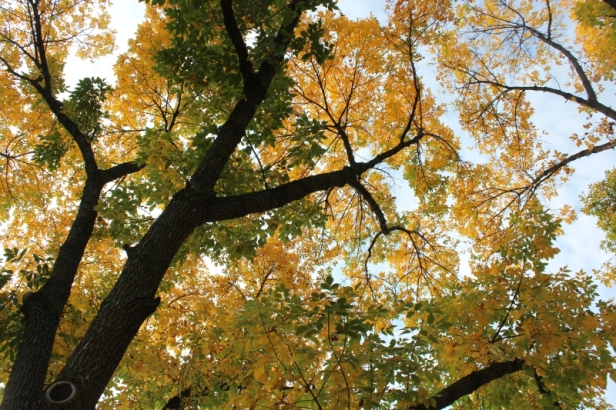 In the autumn, Black Walnuts are one of the first species of tree to turn a rich golden yellow.  Conversely, it tends to leaf out later than other trees in the spring. 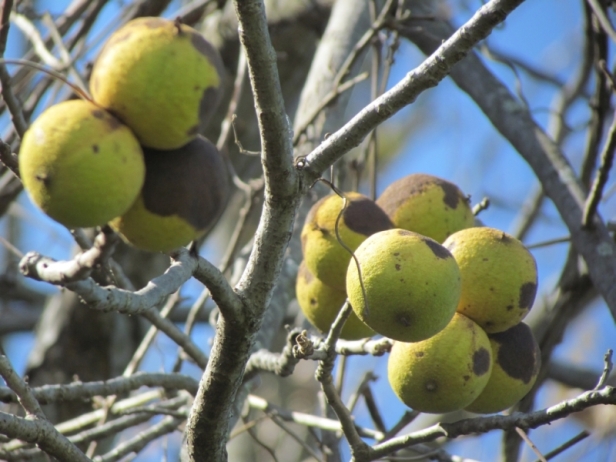 I like Black Walnuts.  They can be seen fairly often in treelines and along wood edges here in central Ohio.  I wouldn’t want to mow the grass under one of these trees seeing the size of their fruit, but I do like watching the squirrels carry off those large husks to chisel away at.