Part 1- getting there & the cabin

Part 2- on the mountainside & the town of Pigeon Forge

And now, the final part of the big summer vacation-

Gatlinburg is right on the edge of the Smokies- it’s actually a quaint little town (but once again full of tourists) that you can pass through on your way to the park.  Cabins and vacation homes dot the hills around it.  Very neat place! 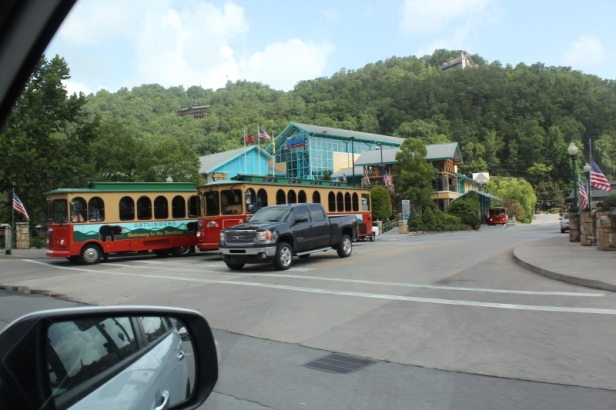 The Great Smoky Mountains National Park is large and impressive:

Great Smoky Mountains National Park is a United States National Park and UNESCO World Heritage Site that straddles the ridgeline of the Great Smoky Mountains, part of the Blue Ridge Mountains, which are a division of the larger Appalachian Mountain chain. The border between Tennessee and North Carolina runs northeast to southwest through the centerline of the park. It is the most visited national park in the United States. On its route from Maine to Georgia, the Appalachian Trail also passes through the center of the park. The park was chartered by the United States Congress in 1934 and officially dedicated by President Franklin Delano Roosevelt in 1940. It encompasses 522,419 acres, making it one of the largest protected areas in the eastern United States. The main park entrances are located along U.S. Highway 441 (Newfound Gap Road) at the towns of Gatlinburg, Tennessee, and Cherokee, North Carolina. It was the first national park whose land and other costs were paid for in part with federal funds; previous parks were funded wholly with state money or private funds. 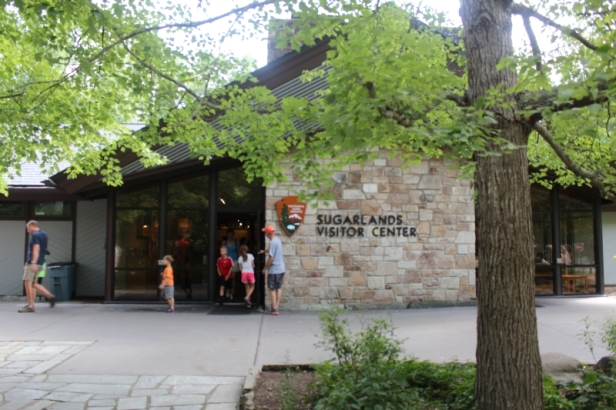 The Sugarlands Visitor Center was quite busy too.  You may be sensing a trend- the park and surrounding towns are busy!

The Great Smoky Mountains National Park is a major tourist attraction in the region. Over 9 million tourists and 11 million non-recreational visitors traveled to the park in 2010, more than twice as many visitors as the Grand Canyon, the second most visited national park. Surrounding towns, notably Gatlinburg, Pigeon Forge, Sevierville, and Townsend, Tennessee, and Cherokee, Sylva, Maggie Valley, and Bryson City, North Carolina receive a significant portion of their income from tourism associated with the park. 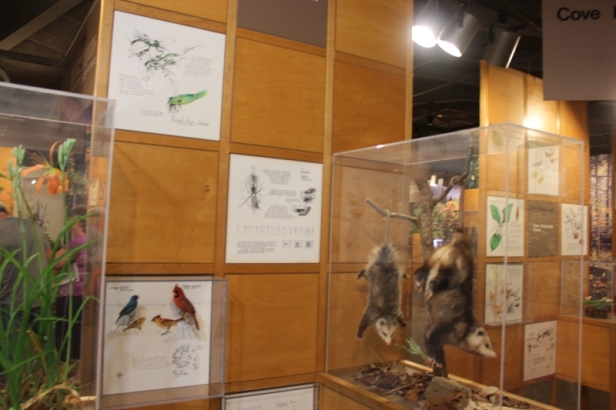 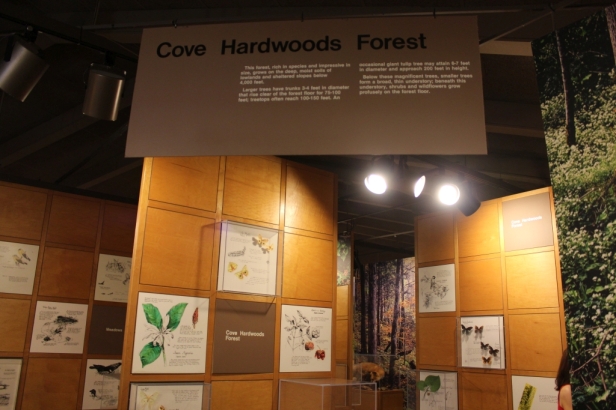 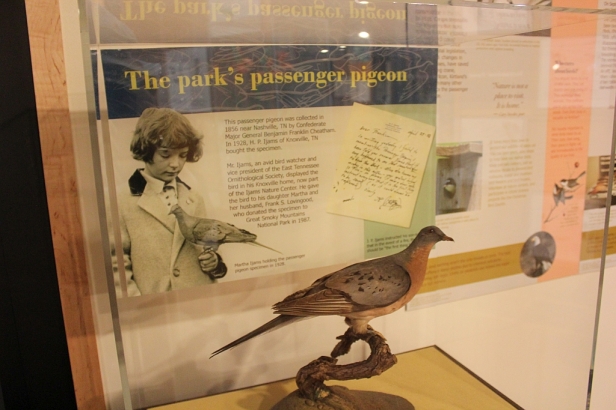 The wide range of elevations mimics the latitudinal changes found throughout the entire eastern United States. Indeed, ascending the mountains is comparable to a trip from Tennessee to Canada. Plants and animals common in the country’s Northeast have found suitable ecological niches in the park’s higher elevations, while southern species find homes in the balmier lower reaches.

The variety of elevations, the abundant rainfall, and the presence of old growth forests give the park an unusual richness of biota. About 10,000 species of plants and animals are known to live in the park, and estimates as high as an additional 90,000 undocumented species may also be present. 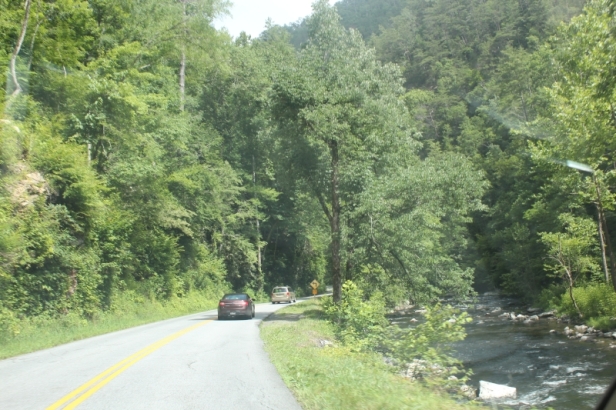 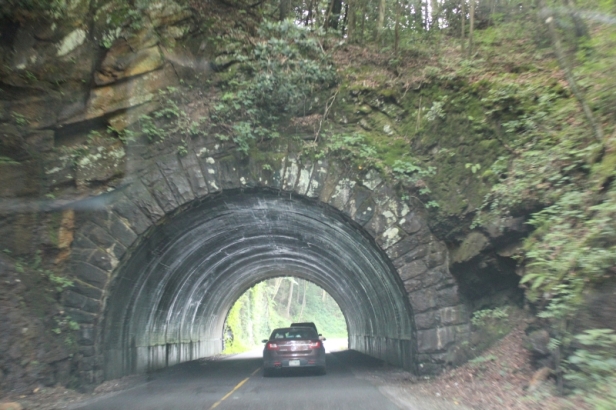 Traveling on the park’s main road made you a bit woozy, driving mile after mile on a twisting and turning road that sort of hypnotized you.  Great scenery, though!  We drove 24 miles of this to our main destination… 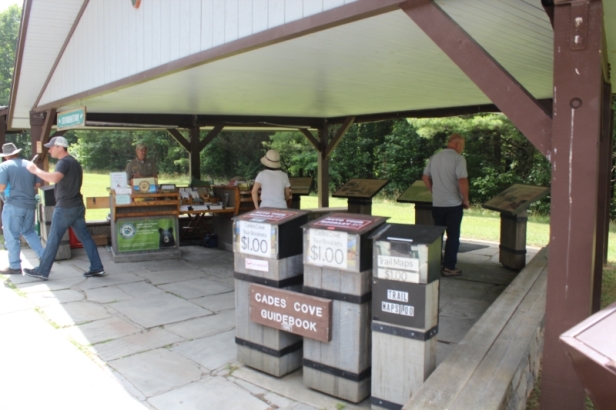 Cades Cove is an isolated valley located in the Tennessee section of the Great Smoky Mountains National Park, USA. The valley was home to numerous settlers before the formation of the national park. Today Cades Cove, the single most popular destination for visitors to the park, attracts more than two million visitors a year because of its well preserved homesteads, scenic mountain views, and abundant display of wildlife. The Cades Cove Historic District is listed on the National Register of Historic Places. 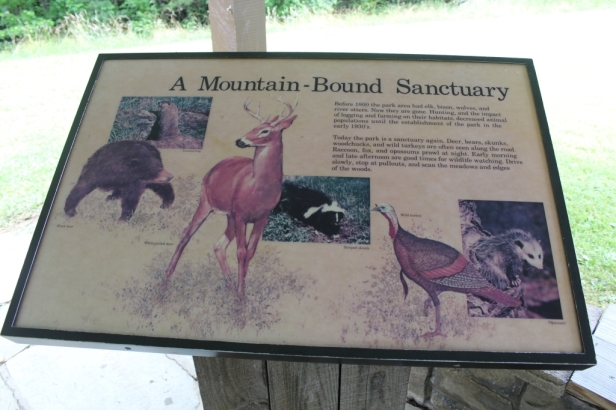 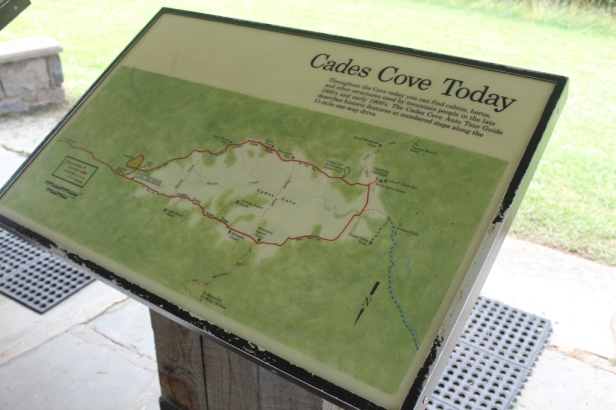 The cove draws attention for numerous black bear sightings, although many enthusiasts make the trip for the abundant hiking access and the well-preserved 19th-century homesteads. On most days, multiple deer can be seen in the meadows and woods throughout the cove. 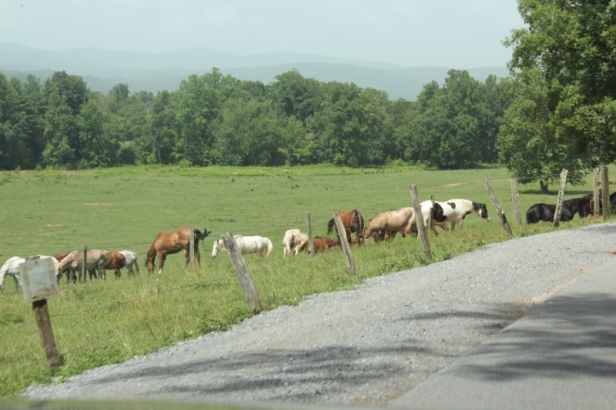 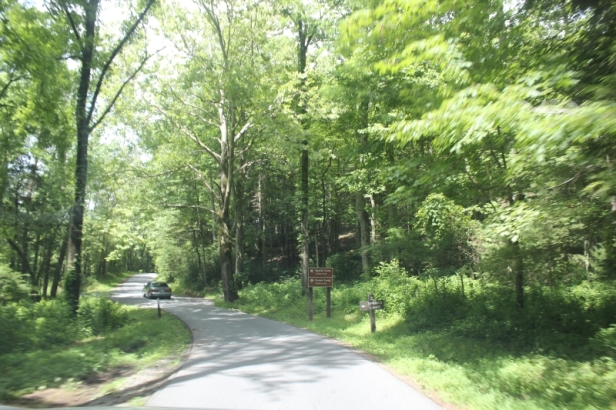 There were over 20 historical sites at Cade’s Cove, which saw the first settler in 1818.  The history of Cade’s Cove is fascinating, and the location is remote to this very day.

Even prior to 1800, the Cherokee had established a settlement in Cades Cove known as Tsiya’hi (or “Otter Place”).  Although the Treaty of Calhoun in 1819 would end all Cherokee claims to the Smokies and Tsiya’hi would be abandoned, Cades Cove still derived its eventual name from the Tsiya’hi leader Chief Kade.

The first permanent Europen settlers in the area were John Oliver, a veteran of the War of 1812, and his wife, Lucretia Frazier.  The Olivers were originally from Carter County and were accompanied on their trip to settle in the valley in 1818 by another Carter County native, Joshua Jobe.

Jobe would later return to Carter County, but the Olivers would stay on and struggle through their first winter in the cove, subsisting primarily on dried pumpkin given to them by Cherokees in the area.  Jobe would return in the spring of 1819 with a herd of cattle in tow, giving the Olivers two milk cows of their own.

The population of the area further expanded in 1821 when Revolutionary War veteran William “Fighting Billy” Tipton bought up large tracts of the cove and sold them to his sons and relatives.  Between 1820 and 1850, the population of Cades Cove grew to 671, with the size of the local farms ranging from 150 to 300 acres.

Without the benefits of modern medicine, the life expectancy of a Cades Cove settler was approximately 45 years of age.  This may have been one of the primary reasons many settlers married as teenagers.  This practice gave rise the construction of “honeymoon houses,” which were often located on the parents’ property near the main house.

A honeymoon house served multiple purposes for young couples, including offering them a way to save money and start families before venturing out to purchase land of their own.  The houses also allowed parents to offer the young newlyweds instruction on the basics of life, such as cooking, farming, building, and raising children.

As with many of the western settlements at the time, Cades Cove residents had to provide nearly all their food, not just for themselves but also for their livestock.  Cabins and other buildings were built on slopes or hilly areas, saving the flat lands for crop production.

Although wheat was the first main crop to be harvested in the cove, corn emerged as the important crop, as it could be prepared by boiling, baking, frying, or drying.  The dependence on grain products, such as oats and rye, gave rise to local mills.  The self-sufficiency of Cades Cove residents could also be seen in the skills they developed in carpentry and blacksmithing. 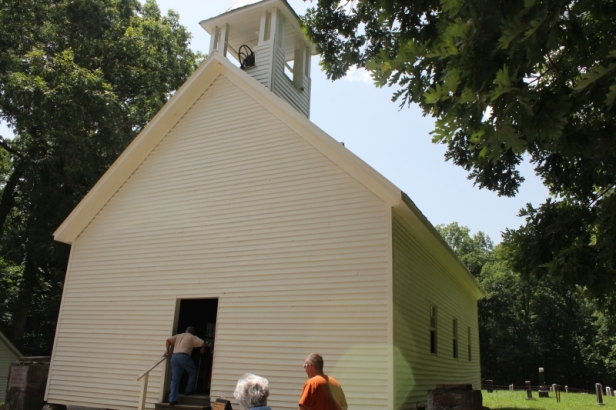 Perhaps the most interesting place we stopped at in Cade’s Cove was the Primitive Baptist Church:

As mentioned in the reading on the Missionary Baptist Church, John and Lucretia Oliver introduced the Baptist denomination to Cades Cove in 1825.  The churches split over some major differences in beliefs.  The split mainly concerned differences over missionary work, temperance societies, and Sunday schools.

The Primitive Baptists remained the dominant religious and politic force in Cades Cove following the split.  The church staunchly backed the Union in the Civil War, which led to divisions tense enough within the cove that it was actually closed during the war.  The congregation met in a log structure until 1887, when the white frame church building which can be viewed on the driving loop today was constructed.  The Primitive Baptist Church resisted closure until the 1960s, more than 20 years after the establishment of the Great Smoky Mountain National Park.

We were privileged to attend a talk by a National Park Ranger, whose grandmother was a Primitive Baptist, discussing what life and worship was like in Cade’s Cove in the 19th century.  The church services were very democratic, with no one set above anyone else.  Life was hard then.  He pointed out that local churches were mutual aid societies- when people were sick, or their crops had failed, or a relative died, the church would help them out.  ‘And for those Homer Simpson types who refused to live a good life, imagine how hard it was when you were shunned by the very people who you may have to count upon for help when things go badly for you.  It was very hard for such types.’  The social web was very much a local church function in early American society.

There was a cemetery behind the church.  One of the graves noted that a church member was killed by North Carolina rebels who took offense to the church’s stance against slavery in the American Civil War. 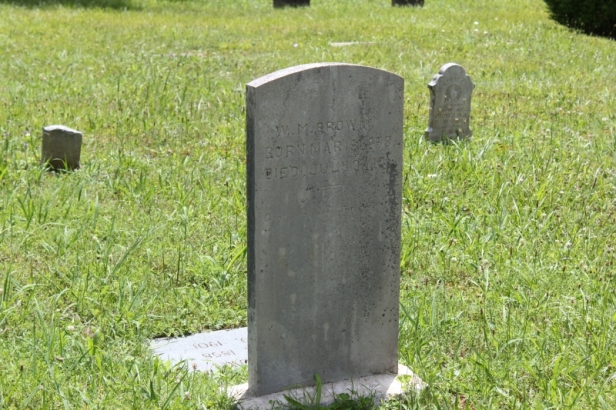 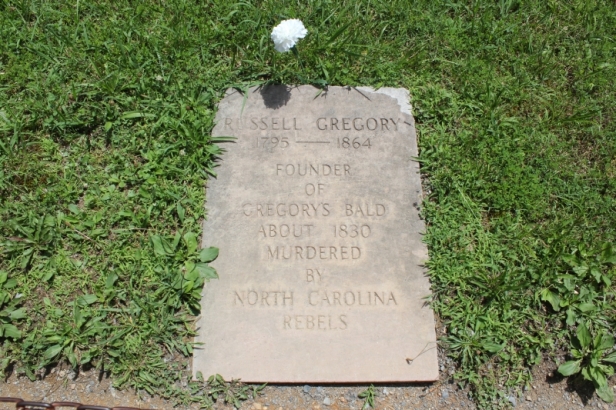 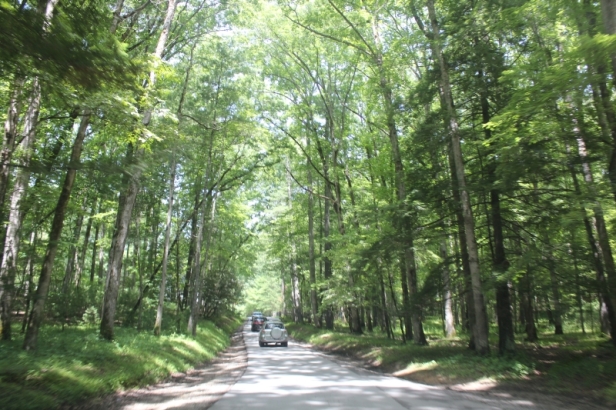 The view from the valley floor was fantastic.  There’s something about mountains that stir the blood! 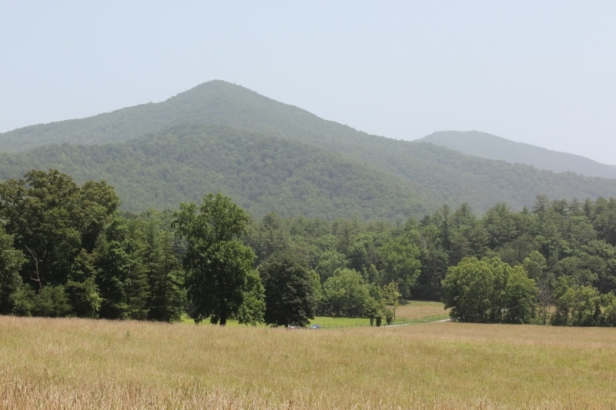 Imagine you are living here 150 years ago as a subsistence farmer.  Chances are you wouldn’t know who lived on the other side of this mountain, the terrain being so formidable. 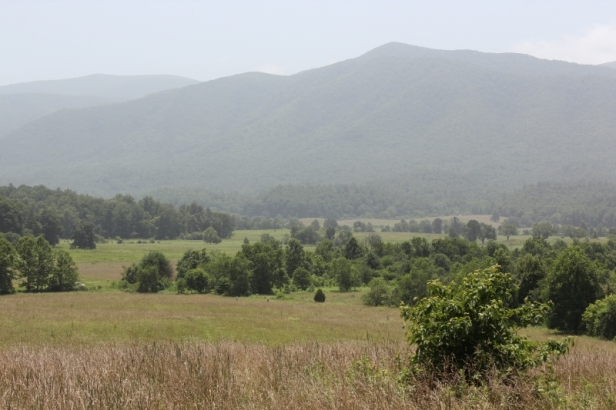 A glimpse of one of the deer we saw- unfortunately the Black Bears were scarce, but we got a late start so I think we missed their early morning appearances

Cades Cove is located in Blount County, Tennessee, which was home to an abolitionist movement so strong in 1800s the county actually fought alongside Union forces in the Civil War.  Reverend Isaac Anderson, a staunch abolitionist who would become the founder of Maryville College, often gave sermons in Cades Cove, and Dr. Calvin Post was believed to have set up an Underground Railroad stop there in the years preceding the war.

It is no surprise, then, that Cades Cove remained pro-Union as well, although its allegiance would cost the area dearly.  Confederate bushwhackers from Hazel Creek and other parts of North Carolina began conducting raids into the cove, stealing livestock and killing any Union supporters they could find.

Elijah Oliver, the son of John Oliver and a Union sympathizer, actually had to hide out on Rich Mountain for much of the war.  With Post also in hiding and the death of John Oliver in 1863, the cove had lost most of its original leaders.  Cades Cove would suffer effects from the Civil War for most of the 19th century, as its population did not return to pre-war levels until the early 1900s and its economy did not recover until the Progressive Era was underway. 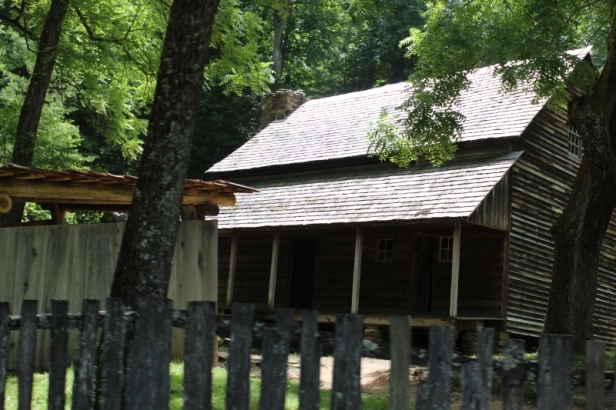 The turn of the century would find the economic emphasis of Cades Cove turning from agriculture to logging.  As logging companies established base camps, local citizens were employed and the entire cove became dependent on the outside world for basic items again, marking a shift from the isolationism which had defined the area in the years following the Civil War.  While logging reinvigorated the local economy, it also led to massive deforestation.

Eventual efforts to include Cades Cove into the Great Smoky Mountain Park were met with great resistance by the cove’s residents, prompting the Tennessee General Assembly to grant the Park Commission the authority to seize properties within the proposed park boundaries by eminent domain.

Despite the eventual departure of all the local residents, the Primitive Baptist Church continued to meet in Cades Cove until the 1960s in defiance of government development.  The last surviving member of the Cades Cove community, Kermit Caughron, passed away in 1999. 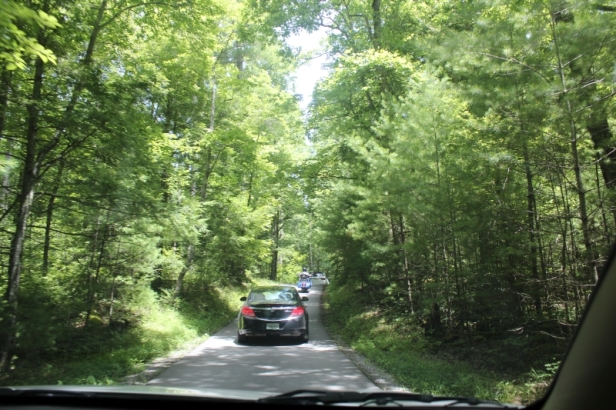 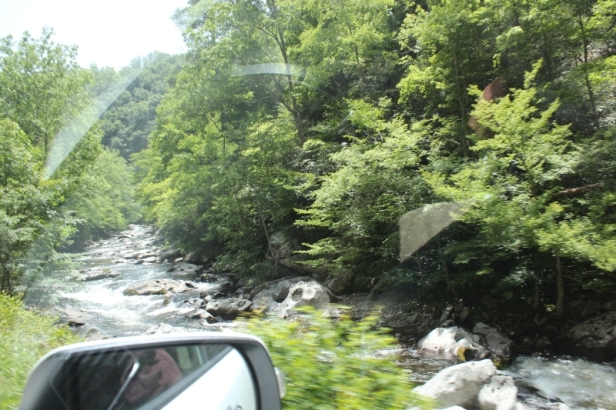 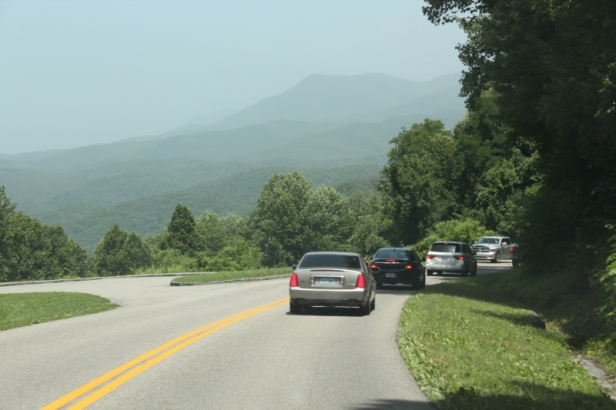 The park was a fantastic place to visit.  There was so much to see, and not enough time! 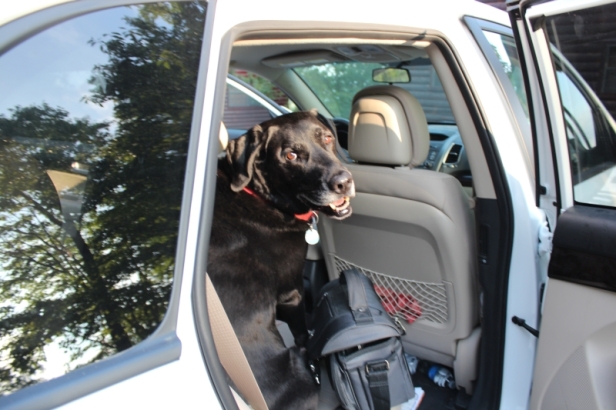 Unfortunately, vacations come to an end!  Time to pack and leave, I bet we will be back!