Winter does not stop the road trips!  Well, as long as the weather is reasonable…

The motivation for this particular trip was a flock of Evening Grosbeaks wintering over at a particular property near Mohican State Forest.  These birds are uncommon in Ohio these days, but apparently this flock will periodically spend the winter eating the sunflower feast at this generous feeder location.  Mohican State Forest is about an hour and a half north of Columbus, and I easily talked a friend into heading up there with me.  This would be a life list bird for both of us.

The trip up north provided some photographic opportunities- when I’m not driving, I can’t resist snapping copious pictures along the way.

On the freeway heading north. 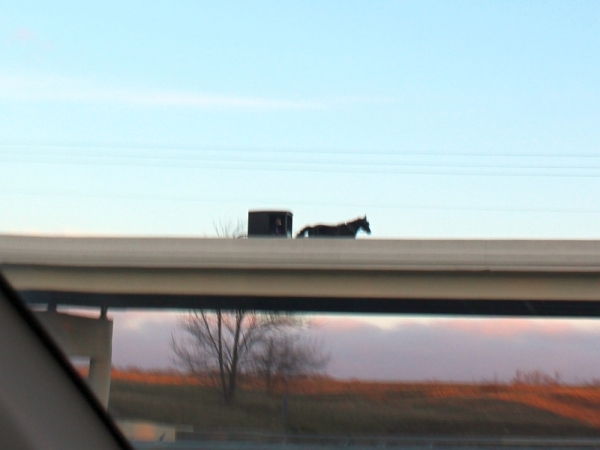 This Amish buggy was passing over the highway as we drove by- Ohio has many Amish communities.

The small town of Belleville, off the beaten path. 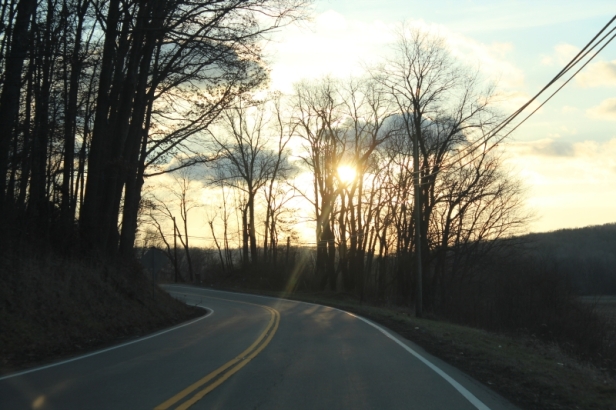 We took state route 97 to the forest. 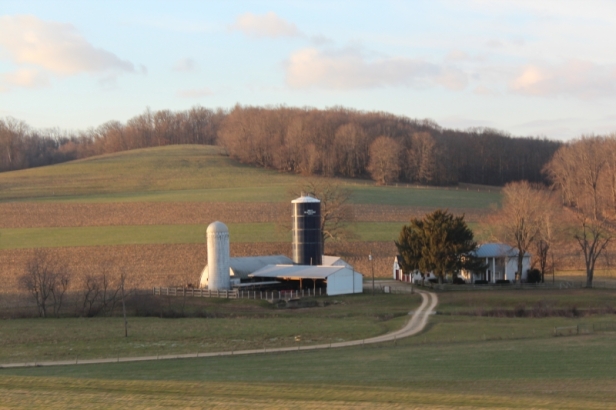 The even smaller town of Butler was near our destination.

We arrived at the forest- a word about Ohio’s state forests is in order:

Ohio has 21 state forests covering more than 200,000 acres. Ohio State Forests vary in size from nearly 64,000 acres to less than 500 acres and are located in 21 Ohio counties. These forests are managed for multiple uses including sustainable timber production, wildlife habitat, soil and water protection, and recreation.
Some 88% of Ohio’s forested land is owned by private landowners, most owning less than 50 acres. Ohio State Forests provide a unique opportunity to demonstrate the benefits of long-term management to an increasing number of private landowners. These lands are managed on a landscape scale not possible with small land holdings.
Ohio’s State Forests were mostly acquired in the form of degraded forest lands.

The 4500 acres of Mohican-Memorial State Forest lie in north central Ohio, just east of the farthest advancement of the Wisconsinan glacier. Forest lands are located on the north and south sides of Mohican State Park, which occupies land in the roughly three-mile long, 350-foot deep Clear Fork Gorge. The scenic gorge, cut by glacial meltwater, is a National Natural Landmark and a very popular destination for outdoor enthusiasts. A large earthen dam at the head of the gorge holds back water to create Pleasant Hill Lake, an 850-acre flood control lake managed by the Muskingum Watershed Conservancy District. A large timber-framed lodge, part of Mohican State Park, overlooks the lake and provides comfortable accommodations.

Land acquisition for the forest began in 1928 after the original forests had been cleared for agricultural use. Eventually, erosion prevailed and the land became less fertile, so farms were abandoned and subsequently reverted to brush and woodland. During the forest’s infancy, planting of trees on abandoned land was a high priority activity. This resulted in over a thousand acres of white, red and mixed pine plantations being planted, mostly by the Civilian Conservation Corps. Native oak, hickory, maple, beech, ash, cherry and walnut hardwoods have reclaimed non-planted areas. Native white pines are also found in the forest with more northerly latitude plants like hemlock and yew taking up residency in the cooler gorge. A natural gas field underlies the forest and is being actively developed. As a result, gas wells and transmission lines are a common site in sections of the forest. 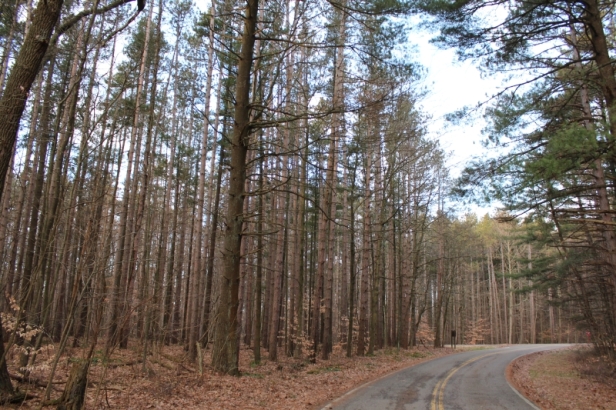 We walked along a road heading towards the house where the Evening Grosbeaks are hanging around- the forest reminds me of the Hocking Hills with the evergreen trees and hills, though it’s not quite as rocky or steep as southeastern Ohio from what I could see. 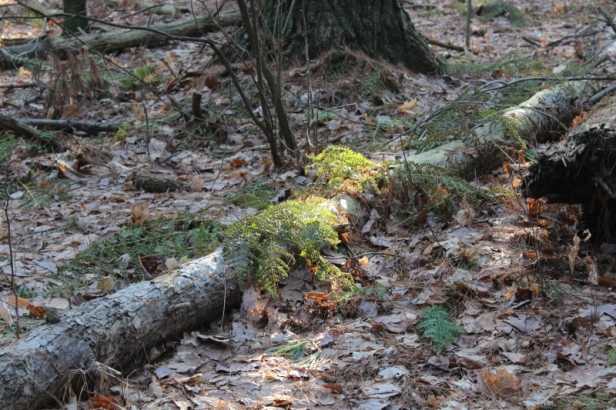 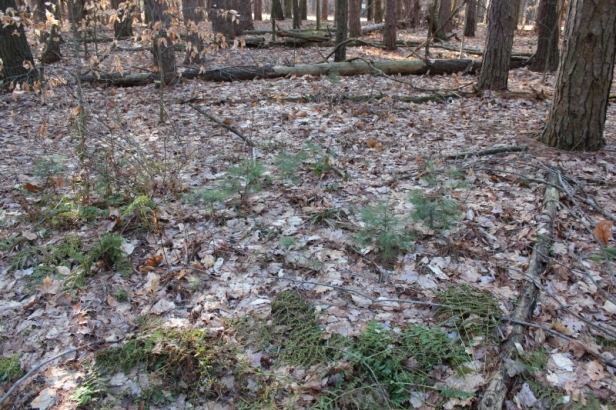 This tree has been worked over by woodpeckers. 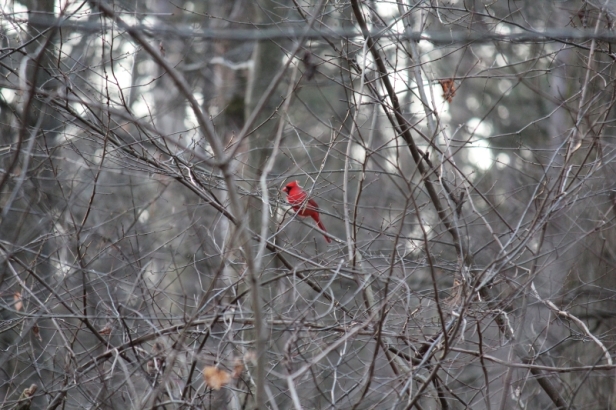 The forest boundary is somewhat of a patchwork- some private residences were almost enclosed within the forest. 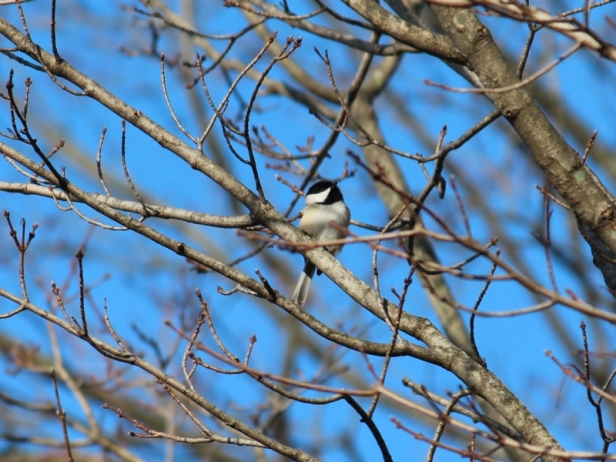 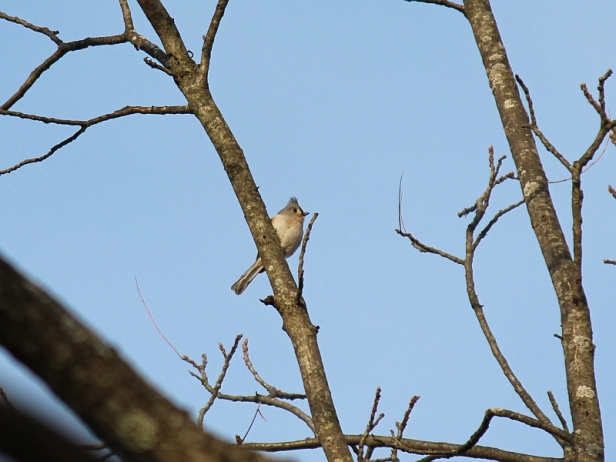 There were plenty of feathered friends in the area. 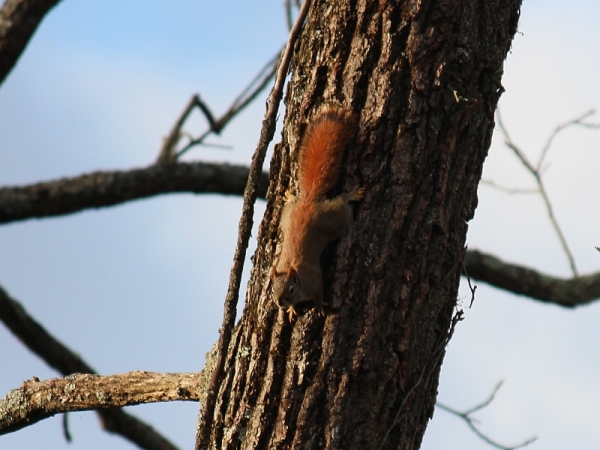 This Red Squirrel practically flowed through the trees at a rapid pace- they tend to be shy of humans.

The Grosbeak-friendly house came into sight- notice the birding crowd!  We chatted a while, finding that people had come from all across Ohio. 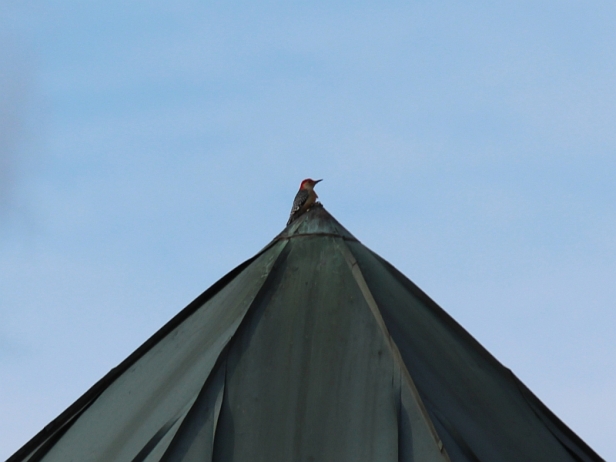 The house was very unique- this Red-Bellied Woodpecker stood on the top of the cupola.

Notice the feeders on the back deck of the house- the birders respected property rights and stayed along the road. 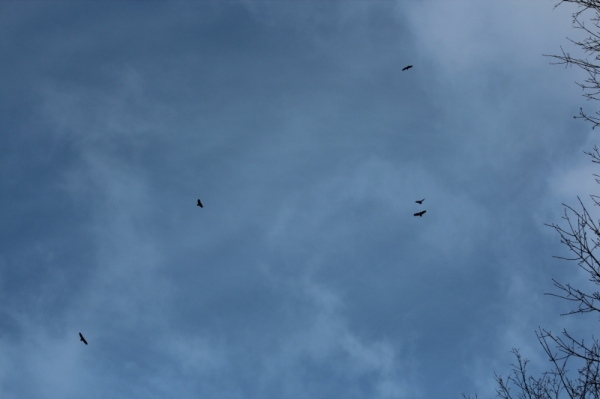 While we awaited a visit from the Grosbeaks, a flock of half a dozen Bald Eagles wheeled lazily in the sky above us- quite a sight!

I posted about these magnificent raptors last year. 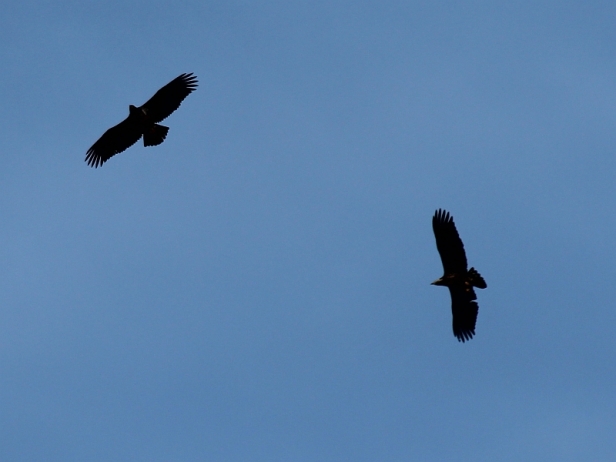 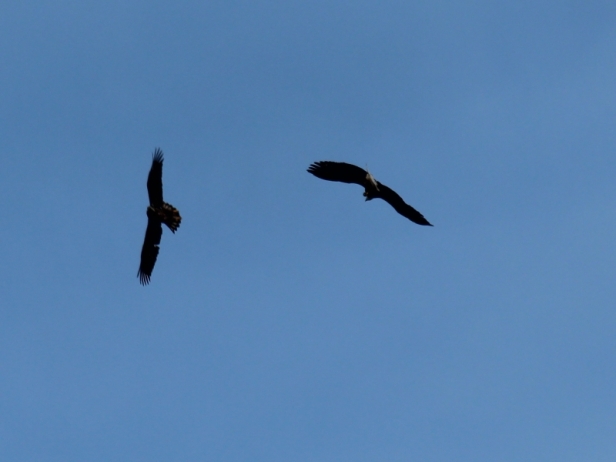 The Eagles seemed to play by swooping right up to each other. 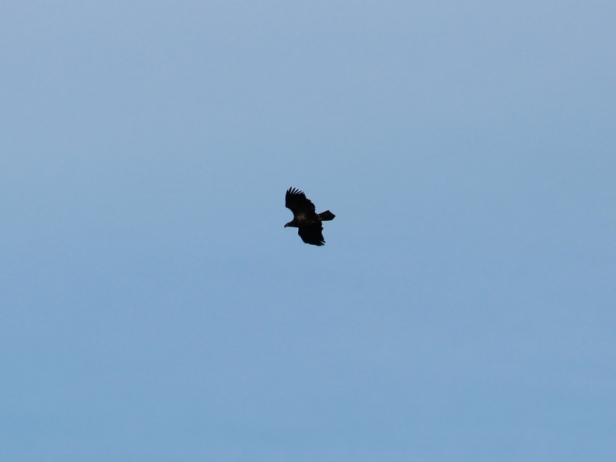 Notice that some of the birds are immatures, having no white feathers yet.

Suddenly, the birds we were looking for appeared in the Hemlocks in the backyard.

Evening Grosbeaks have massive seed-cracking bills and handsome yellow and buff feathers- note the male on the highest perch. 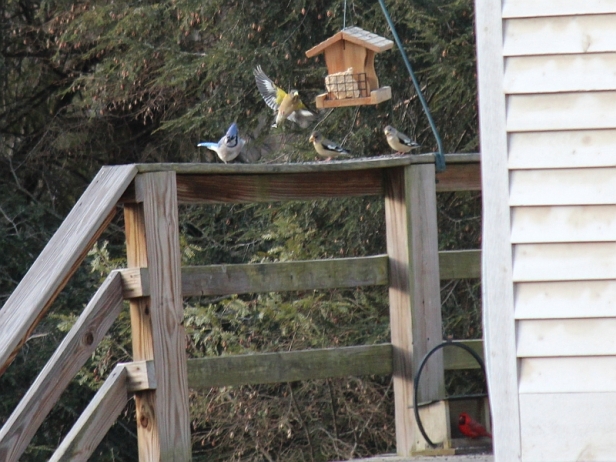 They frequently visited the feeder that we could see from the road (and there were more feeders out of sight).

These birds are voracious eaters- I donated a bag of sunflower seeds to the homeowners, leaving them at the head of the driveway.  It was great to see these birds!

As we walked back into the forest, we passed other birders on the way to see these special visitors.

The view of the gorge was excellent.

The Mohican River ran at the bottom of the gorge, lined with Sycamore Trees. 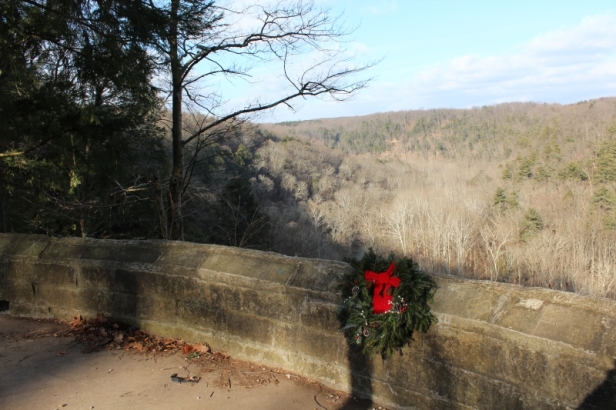 We visited the covered bridge over the Mohican River. 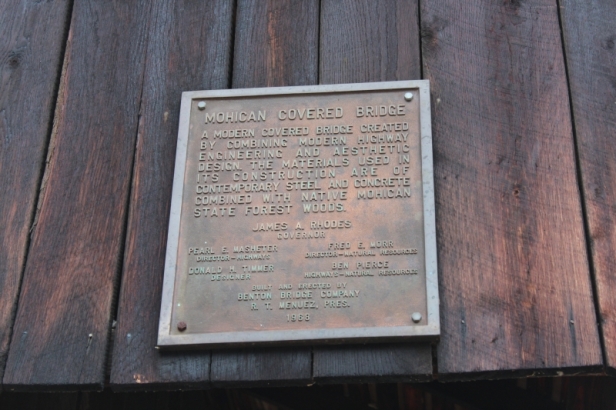 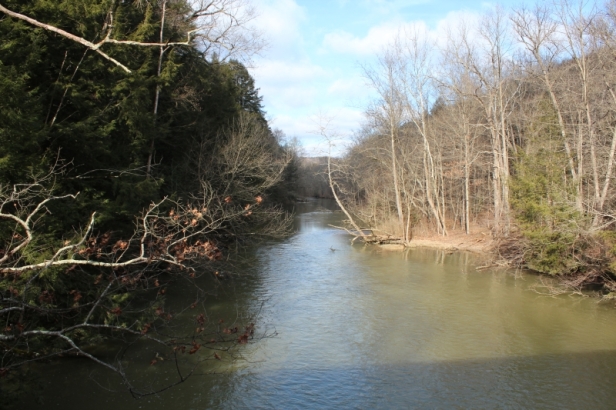 We hit the road again, but there were 2 other stops to make along the way before leaving. 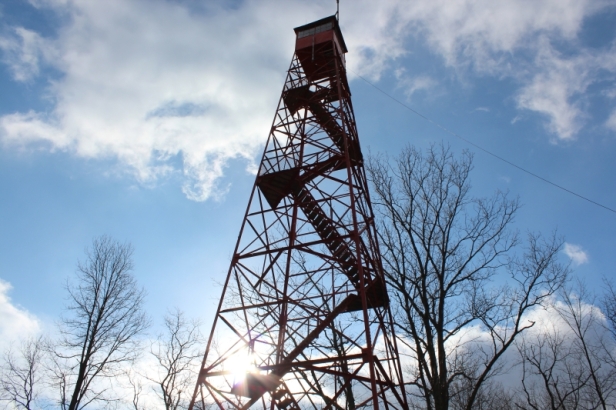 This 80-foot tall fire observation tower was an historical structure that you could climb. 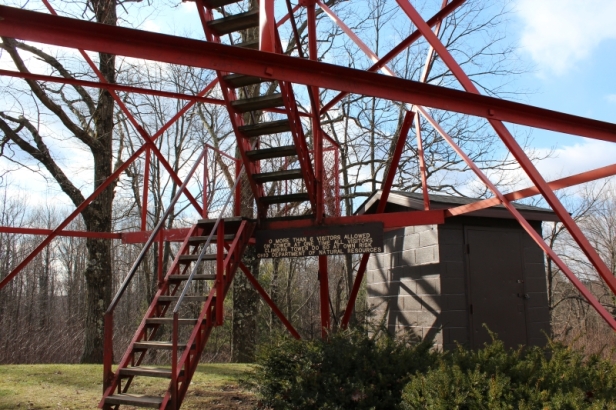 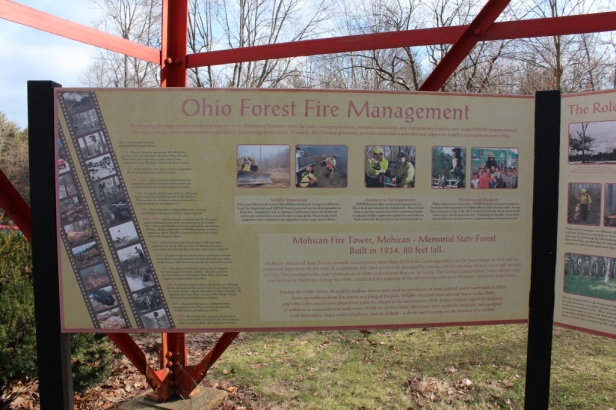 Signs provided the interesting background to these structures- in the 1920s and 1930s, there were 39 fire towers in Ohio, used to search for forest fires.  Planes started to be used in the 1940s for this purpose, and the last fire tower was closed in 1978.

Fire was used by both Native Americans and settlers to clear land for building, hunting and facilitating travel.  Oak trees are more resistant to fire than other trees, and Oaks provide a rich ecosystem for other creatures with their acorns.  This is one reason that controlled fires are still done today, as Oaks are decreasing in number compared to such competitors as Maples.  Also, periodic cleaning of underbrush by fire keeps catastrophic natural fires from raging out of control if the underbrush is too abundant.  It also maintains a diversity of ecosystems.

My buddy climbed the tower- it was a bit tall for me (I have a bit of fear of heights).  He took the following pictures with my camera from aloft.

Our last stop was the Memorial Forest Shrine:

Inside forest boundaries, 270 acres has been set aside for Memorial Forest Shrine Park. This park is a tribute to the more 20,000 Ohioans killed in war. The focal point of the park is the Memorial Forest Shrine, a 32-foot by 24-foot sandstone chapel-like structure formally dedicated in 1947. Two massive wood-bound books containing the hand-lettered names of 20,000 Ohio war dead serve as the centerpiece of the shrine and are preserved in a glass case within the shrine’s grotto.

The architecture of the chapel was unique and interesting.

More than 60,000 Women’s Club members from all over the state worked two years to raise the construction funds. Legislation required that all materials and companies involved in the construction be native to Ohio. Roof timbers were hewn from state forest trees. The native Ohio sandstone blocks came from a nearby quarry. Roof tiles were manufactured in New Lexington and floor tiles in Zanesville. A Columbus art glass studio created the shrine’s six stained-glass windows, which depict peace doves with olive branches, as well as red cardinals (the state bird) and buckeye trees (the state tree). The Great Seal of the State of Ohio is an interior focal point of the Memorial Forest Shrine.

Two thousand people made their way to southern Ashland County for the shrine’s formal dedication on April 27, 1947. Honored guests that day included some of Ohio’s most decorated war heroes. As part of the ceremony, Women’s Club leaders turned over the keys to ODNR, symbolizing the state’s permanent guardianship of the facility. 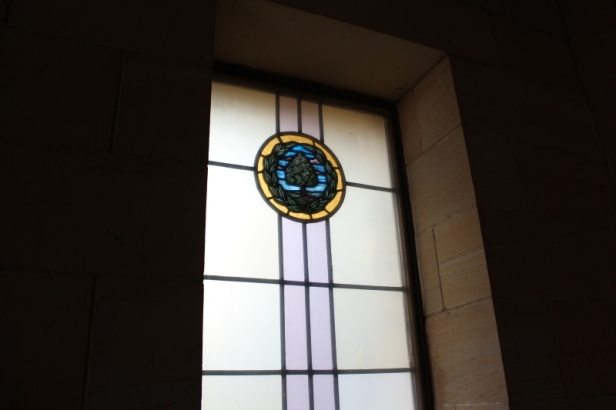 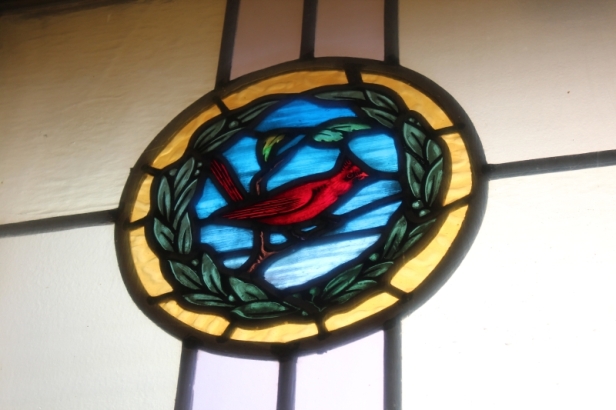 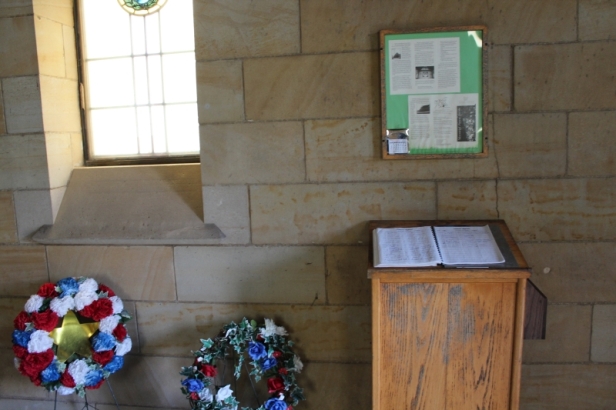 We didn’t see everything in the forest, so another trip will be in order in warmer weather.  Hiking paths and a lake and small dam were among the unseen sights.  I’ll need to take more pictures then!