This post is a flashback to last September, when the autumn migration was in full swing.  Remember when the season was was green and warm?  I didn’t think you’d mind going back in time a few months 🙂

I was on my first visit to the Darby Wetlands.  I approached the main pond through the prairie vegetation. 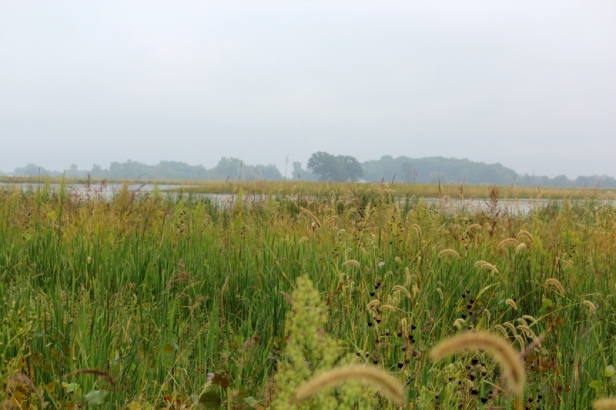 There were shorebirds and waterfowl upon the main pond, which drew my attention. 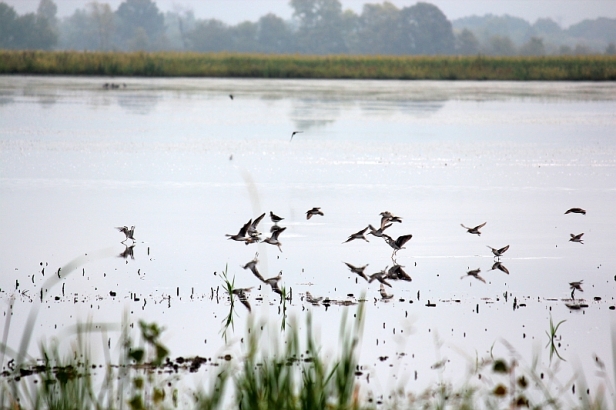 However, in the distance, I noticed 4 unusual-looking birds standing in the shallow water.  I focused my camera upon them and took some pictures.

Notice the white feathers in the water around them.

That’s a swallow flying just above above the standing birds.

At first I thought they were seagulls, but what really stood out about these birds was their sizable bright orange-red beaks.  Their black caps, black legs and white bodies clinched the identification.  This was my first time seeing this species, which I certainly did not expect to see in a shallow wetlands pond in the middle of Ohio farm country.

Terns are shorebirds similar to seagulls- indeed, they once were considered a subfamily of gulls.  They are sleeker than gulls, and have bigger bills, as well as long tails and narrow wings.  Worldwide in range, these birds typically live along seashores and lakes, where they fly over the water with bills pointed down, looking for fish to suddenly dive upon and seize for a meal.  They also can hover over the water looking for their prey.  Most Terns nest in colonies, constructing rudimentary nests upon the ground.  They often migrate long distances- as a matter of fact, the Arctic Tern migrates from the Arctic Circle to the Antarctic and back in the course of a year, the longest regular migration of any known animal.  This can be as long as 44,000 miles!

This particular species I was seeing is the world’s largest Tern– the Caspian Tern.  This species can weigh up to a pound and a half (hefty for a bird) and average 20 inches in length with a 52-inch wingspan- that’s over 4 feet.  These 4 birds had probably summered in the Great Lakes, and were migrating south to the Gulf Coast or Central America, a much warmer area to spend their winter months.  Like other Terns, they tend to live long lives; Great Lakes Caspian Terns live an average of 12 years, while the oldest individual’s recorded lifespan was 26 years- far older than most birds live.  Perhaps this group, stopping by an inviting stretch of water, had made this trip several times before, and were interested in this new body of water that had appeared since last year.

After a while, the Terns took to the air. 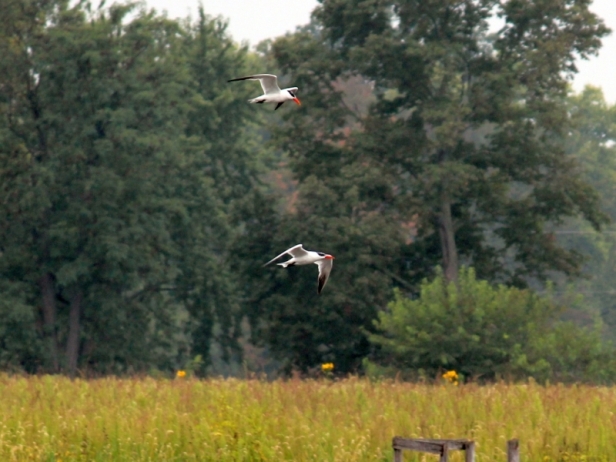 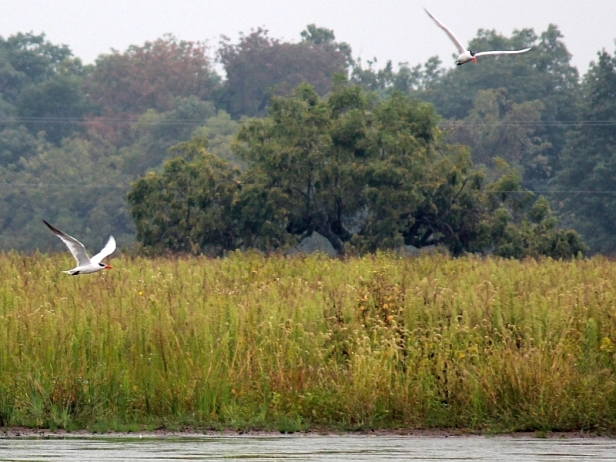 Their flight was truly graceful, long pointed wings driving them swiftly and strongly through the air.  They circled the wetlands a few times, as if taking in the view, or deciding who was to lead the way south. 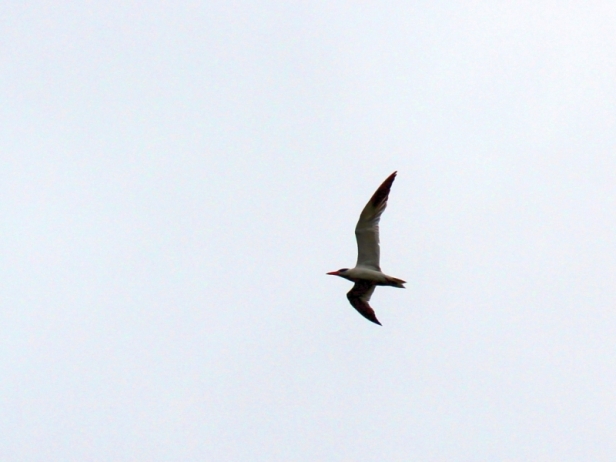 One bird gave a loud cry as it circled.

They then flew off southwards, continuing their migration.  perhaps they’d next stop at the Ohio River, a more impressive body of water.  One Tern that was banded by ornithologists flew an average of 150 miles a day during migration.  At that rate, these birds could conceivably reach Florida in as little as a week, if they didn’t linger on their journey.  That’s pretty impressive.

Being a land-locked birdwatcher, I was unprepared for seeing these magnificent shorebirds that are usually found along great bodies of water.  It just goes to show you that the unexpected can happen during the migration season, or any other season for that matter.  There’s often something interesting happening in the natural world around you!

13 thoughts on “Migration Stories: Visitors from the Great Lakes.”