It’s December, and signs of winter in Ohio are all around- darkness falling soon after 5 o’clock, trees mostly bare of leaves, and morning frost.

I’m getting out of the habit of looking for certain things on my hikes these days- wildflowers and insects, for instance .  From the spring clear into the autumn, there were all sorts of things vying for my attention on hikes.  Insects buzzed by or hopped on the trails, brightly colored blooms naturally attracted the eye.  With winter weather’s arrival, I focus my efforts on looking for birds these days by default.

Remember the cicada chorus last summer?  By September, those sounds were few and far between, so you can imagine my surprise when I heard a lone cicada on October 11th.  This last survivor of the huge legions of noisy bugs trying to attract a mate probably did not find another of his kind.  It seemed sort of a sad sound for that reason.

In late October, I was surprised to run across two wildflowers I hadn’t seen in a while:

Consulting my copy of Robert Henn’s Wildflowers of Ohio, I found that both Ox-Eye Daisies and Yarrow- despite being summer plants- can bloom as late as October.  Perhaps I shouldn’t have been surprised, but I had not seen specimens of either plant in quite a while.  They stood out because of their typical absence by this particular month.  They were surrounded by autumn blooms- Goldenrod and Asters were plentiful.  The other summer plants were long gone.  Even common things can be startling when you find them out of place.

Earlier in October, I had spotted a pleasant bright yellow bloom that I was familiar with seeing in the spring and summer:

Wood Sorrels can be found on lawns in the warm weather, but they are usually winding up their blooming careers by August.  So this one was a couple months late.  OK, that’s more impressive, and it was a cheerful sight to see.

In the middle of November, I ran across a moth fluttering slowly above a path.  I followed it and took its picture when it landed upon a bramble.  The temperature was just above freezing on a frosty late morning, and I was quite impressed with this individual, as I hadn’t noticed any butterflies or moths since early November.  Hang in there!

A late moth thawing out 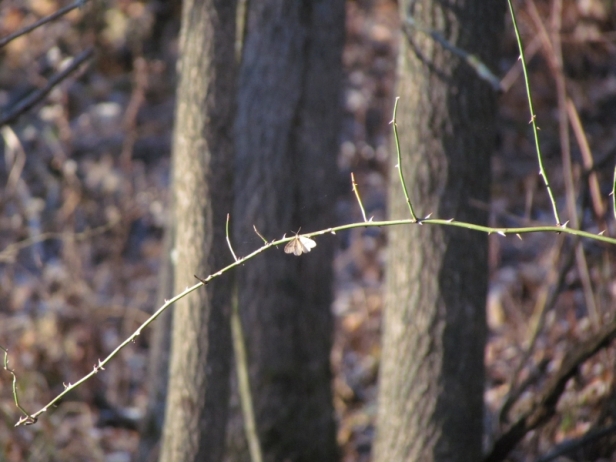 But here in December, things out of place are even more interesting.

Yesterday afternoon, I heard a few crickets chirping quietly from grass that was frost-covered earlier in the morning.  The cricket chorus of autumn is over now, but there are some hardy individuals hanging in there, lurking under fallen leaves that take the brunt of the frost for them.  The week before I saw a grasshopper moving rather slowly in the grass- a sparrow was hopping around nearby searching for things to eat.  The insect supply is getting decidedly lower by now.

I’ve been out hiking the last 2 frosty mornings, getting in some photography between the rather prolonged rainy weather systems common lately.  Both days I was along the Scioto River, and I saw some wildflowers blooming that I did not expect to see.

Most Goldenrod is brown and fuzzy now

This New England Aster is still hanging in there 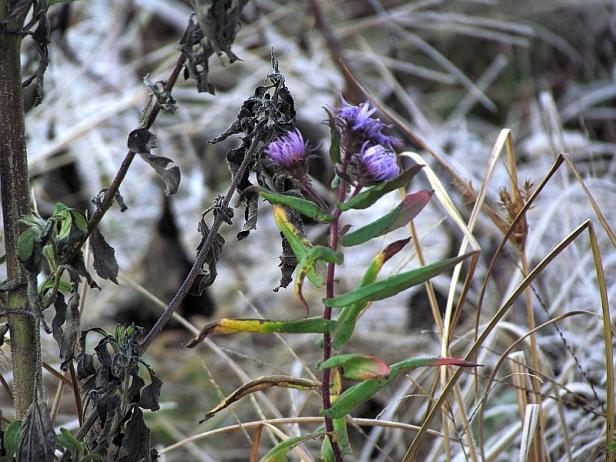 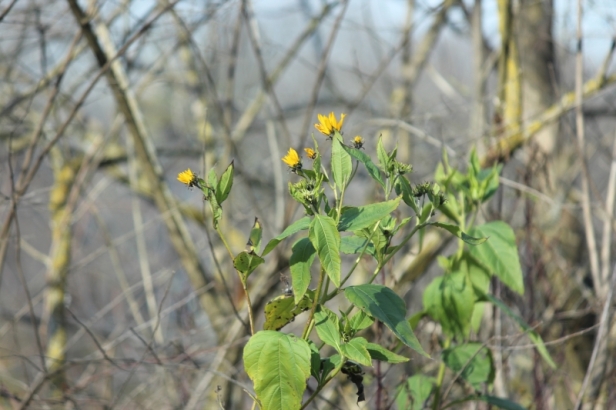 An Obedient Plant shrugging off the frost

A remarkably fresh-looking Black-Eyed Susan that must be frost-resistant! 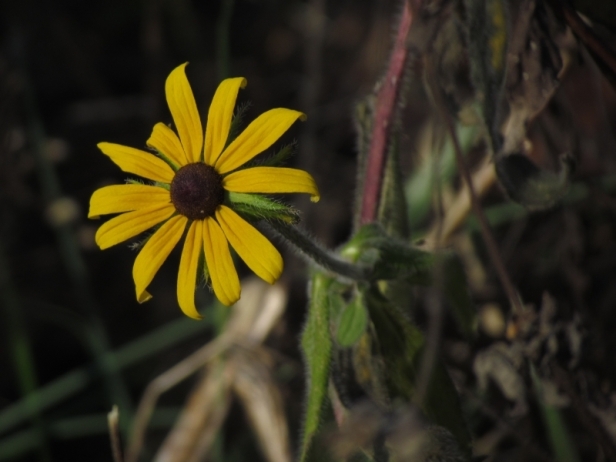 The amount of blooms I saw along the river was quite a surprise.  I’m wondering if there is something about growing along a river’s edge that preserves these flowers for longer than normal.  [edit- see quietsolopursuit’s comment below that explains this!]  Some of these plants are a couple months past their pull date.  I briefly wondered how long that perfect Black-Eyed Susan would last if it could be taken into a greenhouse…but there is a rhythm to everything in nature, and new plants come from the seeds of old plants that sustain the growing cycle.  Keep an eye out for those durable individuals that stick around longer, and appreciate their tenacity.

21 thoughts on “It’s Late In The Season For That.”