Battelle Darby Creek Metro Park is a favorite natural place of mine.  It’s the largest park in the superb central Ohio Metro Park system, and has various habitats within its over 7,000 acres of land, including meadows, woodland, prairie, and 2 national scenic rivers- the Big Darby and Little Darby Creeks.

One of these days I’ll discuss this great park in-depth, but for now, I want to focus on a relatively new feature that is being added to this growing natural area.  Nestled within the farmland terrain of the surrounding rural landscape is a new addition to the park- the Darby Wetlands.  Work started last year on this 500-acre site, which when completed will be ‘the largest native prairie wetland complex in Ohio’.  Foot paths and boardwalks are marked out, but for now are merely mowed grass pathways.  Work just started on a nature center nearby, and the whole project should be completed by next year.

So, currently, there is a huge shallow pond surrounded by prairie fields.  You can reach the site with a little bit of effort; the park rangers encourage visitors who want to get an advance look at what’s going on.  I’ve been there 4 times since September, and wanted to share some of the photos I’ve taken.

The closest evidence of humanity is a grain storage station along a county road; temporary parking is available here until the area is fully developed with finished pathways, a nature center, and a parking lot. 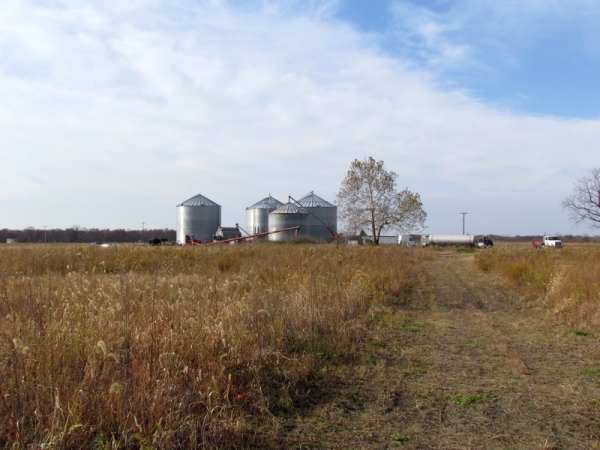 Though the site is not officially open, birders hike their way to the wetland for a preview of what’s to come. 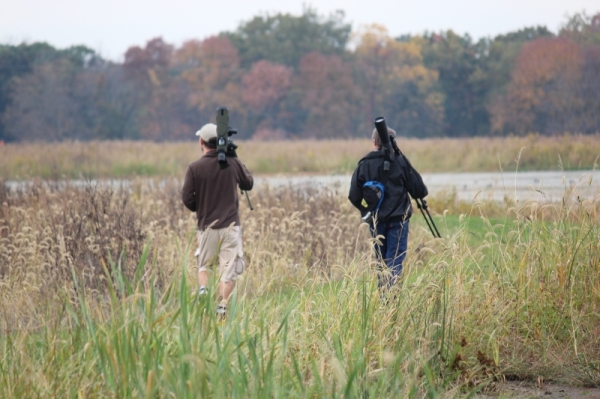 Flocks of blackbirds are common in the area- Red-Winged Blackbirds, Starlings, and Cowbirds are a common sight in the autumn.

Sparrows are flocking in the area too- I’ll save that discussion for a future post.

A Northern Harrier hawk cruises low over the prairie looking for a meal.  These birds of prey stand out from the more common Red-Tailed Hawk by flying close to the ground and having a white rump noticeable in flight.  It used to be known as the Marsh Hawk.  Harriers enjoy this area.

A male Ring-Necked Pheasant on the grass path.  It was with another pheasant, but they were shy and I couldn’t get a better picture.  This game bird was introduced from Asia and is partial to farm country.

Tree Swallows hung out in the area earlier in the autumn before migrating south for the winter. 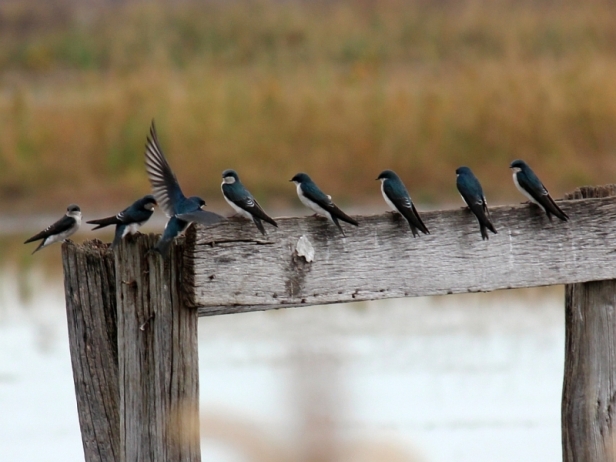 This Rusty Blackbird was glimpsed through some Cat-Tails.  Unfortunately, this species is declining rapidly- scientists are unsure why. 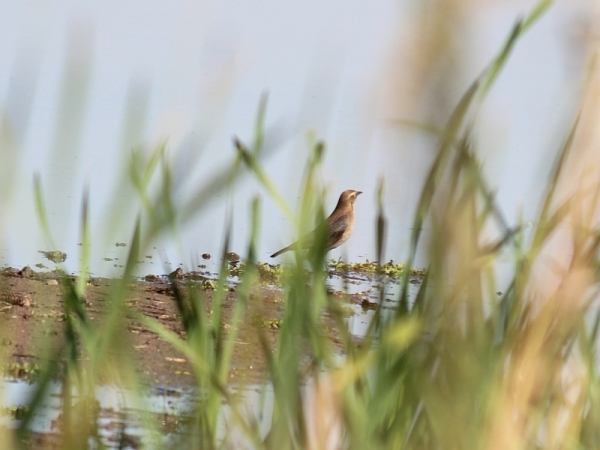 Deer leave plenty of tracks in the area.

The flat terrain consists of reclaimed prairie and wetlands; this general area is the Darby floodplain, site of extensive tallgrass prairies thousands of years ago after the last glaciers retreated.

This Great Blue Heron flew over from the direction of Big Darby Creek.  They’re fun to watch when flying, their long legs dangling in their wake, their necks doubled up.

American Coot are a common sight on the water.  These duck-like birds actually have more in common with rails than ducks- especially noticeable when you see their large lobed feet.  I saw some immature Coot at the Honda Wetlands this past summer.  This is what they look like in their adult plumage.

These Blue-Winged Teal were more shy than the Coot.  They can be mistaken for Mallards at times; look for their white face patches and powder-blue speculum. 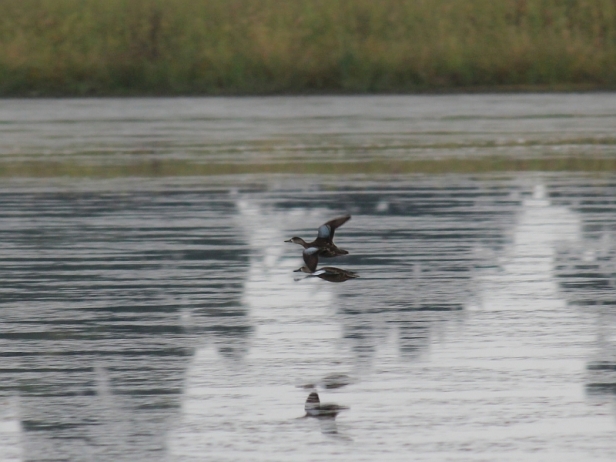 And now- some interesting shorebirds!

Killdeer frequent this area, which is no surprise- they’re a very common inland shorebird.  They’re partial to groups at this time of year.  If you look closely, in one of these pictures you will see a thirsty Eastern Meadowlark– a bird that loves open grassy fields & prairies.  Also notice the white feathers in the water, a common sight when shorebirds or waterfowl gather in flocks. 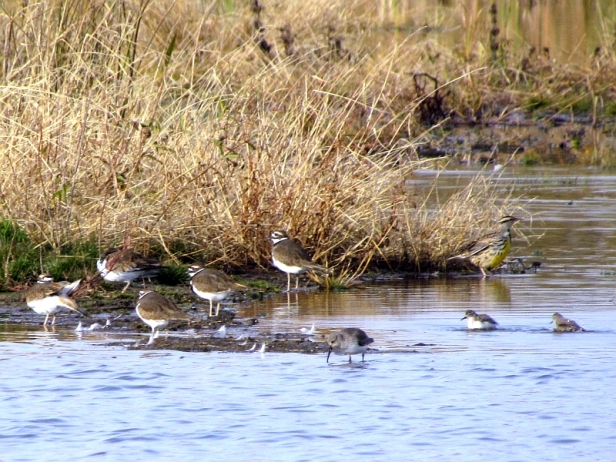 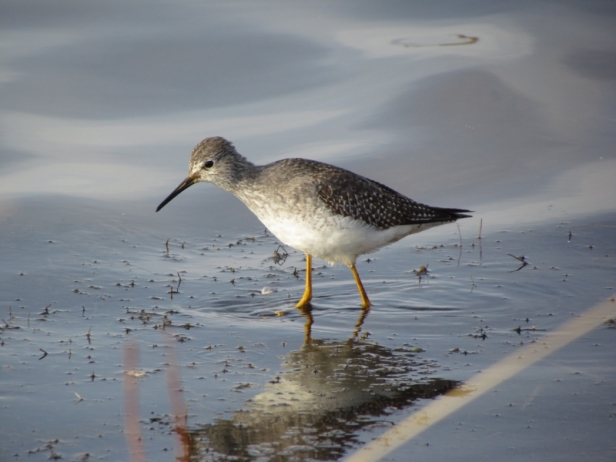 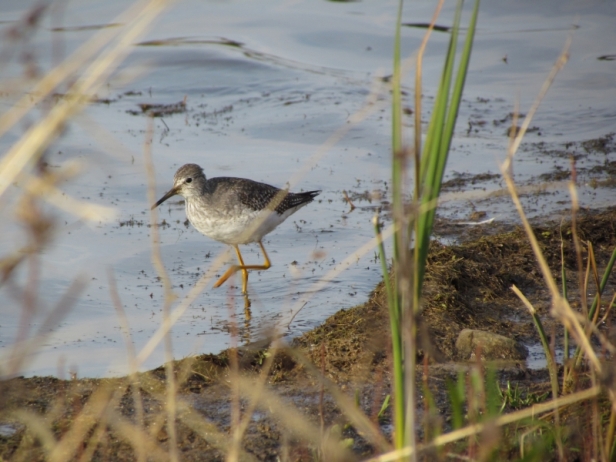 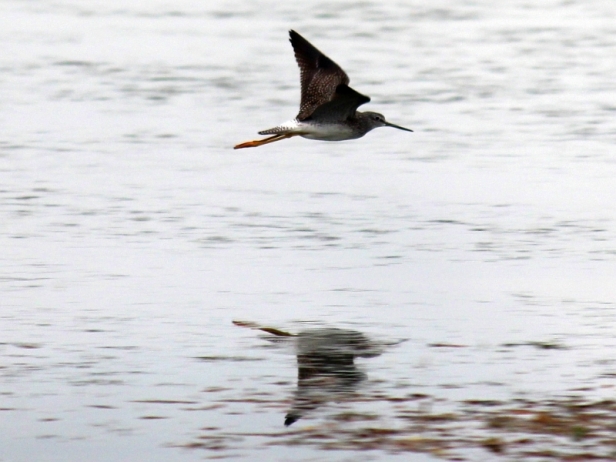 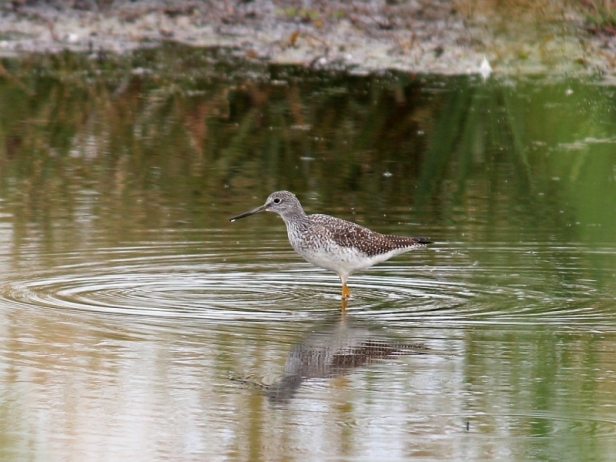 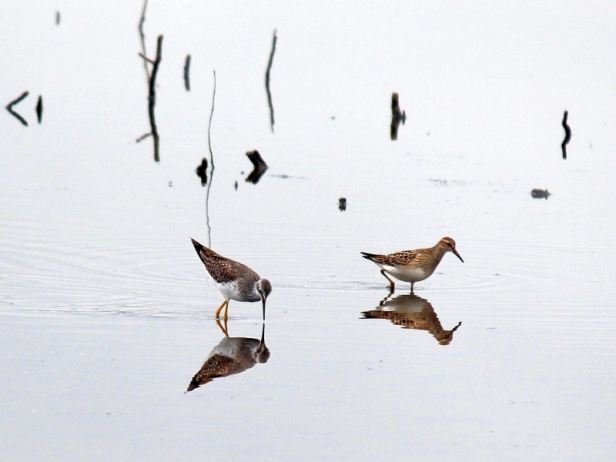 ‘Peeps’ are what birders call small sandpipers that often look alike at this time of year.  The most common type of Sandpiper I’ve seen here is the Least Sandpiper, which has yellow legs. They enjoy walking along the shoreline probing the mud for food.  If you’re careful and patient, you can get fairly close to these little birds.

Notice how these shorebirds and waterfowl often have their own niche, or particular zone, where they feed.  They stay out of each other’s way and everyone gets along better by specializing in certain feeding areas.  Nature keeps harmony this way in its infinite wisdom.

A month and a half ago, I saw an interesting migrant species here, but I’ll save that story for a future post.  There’s no need to rush!

The Darby Wetlands shows every sign of attracting all manner of interesting birds and wildlife.  I’m looking forward to seeing what Metro Parks has in store for us in a year or so when the improvements to this site are complete.

19 thoughts on “Autumn at the Darby Wetlands.”