A Bloom for a Day

There aren’t lots of blue wildflowers in Ohio, it seems.  Purple, sure.  Violet, we’ve got that covered.  But blue?  They’re out there,  but you have to know where and when to look for them (I’ll be talking about them here eventually).  Blue it seems got short-changed, taking a back seat to such popular colors as yellow, pink and white.

What the color blue lacks in variety among Ohio wildflowers, it makes up for in the sheer abundance from one particular plant.  Ohioans are familiar with this sight.

This is Chicory, a very common summer plant.  It prefers sunny locations, and can be found along roadsides, in fields and in waste areas.  It seems to especially like growing alongside roads- one explanation I found for this was that it likes growing near pavement, rocks and debris because they hold warmth.  So much for my original theory of seeds falling off of wagons and trucks!

This plant is not a native.  It came to North America from Europe with Old World colonists- it is actually native to the Mediterranean region.  Its history in this area goes back a long way.  As a matter of fact, this plant is one of the earliest mentioned in classical age literature.  It was  cultivated by the ancient Egyptians for medicinal uses, and eaten in the Greco-Roman world as a vegetable (the root) or in salads (the leaves).  It continues to be eaten today- you’ll see it on the menu in Italy, among other European countries.  Check out some of the recipes from this BBC webpage.

The root of this plant contains inulin, a fiber substance that is increasingly being used in foods.  Right next to me as I type these words I have a Clif Bar (a favorite snack of mine), and the label tells me that it contains: inulin (Chicory extract).  This substance can replace sugar, fat and flour, and can be used as a fiber additive.

Not only is it consumed by humans, but Chicory is also good animal fodder.  Livestock find it easily digestible and nutritious, and it is toxic to internal parasites as a side benefit.  Lots of research has gone into breeding different varieties as food for farm animals, particularly in New Zealand.

This plant has had medicinal uses for thousands of years.  Besides the aforementioned treatment for parasites, it has been used as a tonic for various ailments, as well as a laxative and a diuretic.

However, Chicory’s most well-known use has been as a coffee substitute and extender.  Residents of New Orleans know it as Cajun Coffee, and it has always been used by rural folk (and during hard times) as a substitute for that popular brewed bean that Starbucks sells by the cupful.  As a bonus, it’s caffeine-free.  This appeal is worldwide- coffee drinkers in India, the Mediterranean and areas of southeast Asia also add it to their brew.  Southern soldiers during the Civil War drank it, and the Great Depression introduced it to many who couldn’t afford ‘the real thing’ in their percolators during those hard times.

I started noticing stems of this plant growing in May of this year; the first blooms I saw came in early June.  It is a prolific summer plant, though it will linger on into fall.  You’ll notice in the first 2 pictures that there are a limited amount of flowers growing at any one time upon this plant.  This is because the blooms are extremely short-lived, showing their glorious blue petals for only a day or so.  This is the culmination of 2 years of growing- the first year, the plant doesn’t flower, the second year it does.  It then produces seeds, and dies with the frosts of approaching winter.

The flowers are quite lovely, in my opinion.  Insects seem to like them as well. 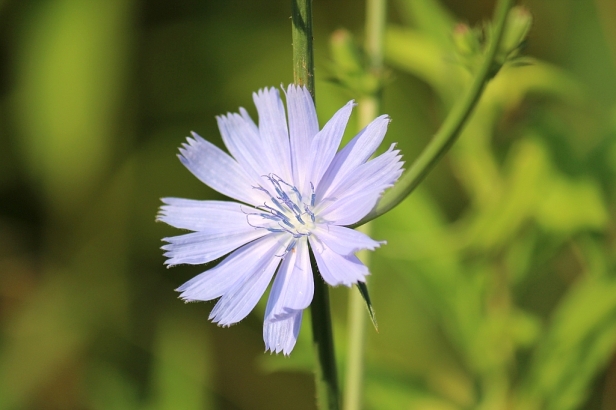 This shade of blue is particularly attractive to me.  I think of it as ‘cornflower blue’- and if I remember right, cornflower is one of this plant’s alternate names.

Every once in a while, you’ll run across a plant with pink versions of the blooms.

If you’re up early enough, you may notice closed flowers on these plants.  They’ll be open soon enough, greeting the sun for their one glorious day of beauty.  This makes me appreciate them even more.

22 thoughts on “A Widespread Blue Wildflower for Ohio’s Summer.”