Certain bird species are what I consider extra-photogenic; some have a lot of what I call ‘character’- meaning that they can always surprise you and present you with a worthwhile picture opportunity no matter how many images you’ve taken of the particular species before.

The species I’m going to discuss here has both of the above attributes.  Since I had my little photographic adventure that is the subject of this post, I’ve taken a few images I wanted to start out with.  I enjoy these birds quite a lot. 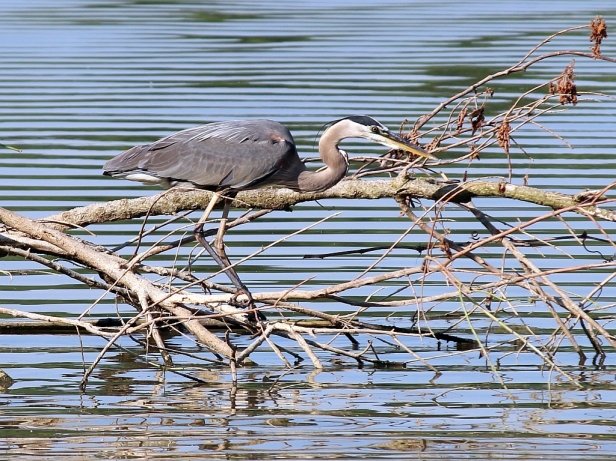 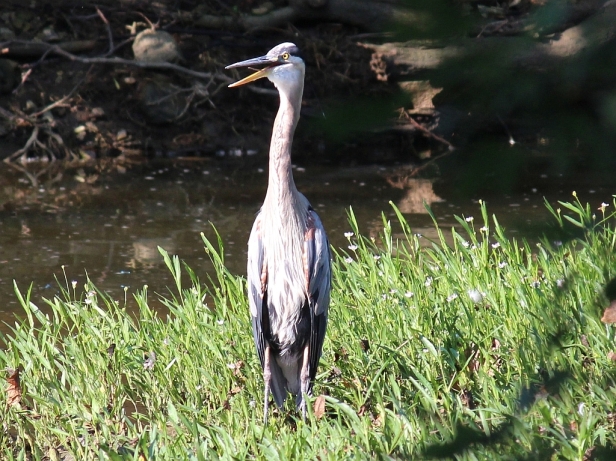 And now, to the story:

A Majestic Bird Catches a Fish.

At a local pond, a large shorebird came flying in for a landing, not being overly concerned that there were several people around- including me and my camera.  I didn’t mind.  Not at all!

Notice this birds’ distinctive look in flight- its long neck doubled up, its stilt-like legs dangling behind it.

It landed in the pond, not very far away from me.  I held my breath, and started to take many photos.

This is a Great Blue Heron, a common North American shorebird which can be seen along the seashore or at inland ponds and rivers.  Its long legs and bill, bluish-gray body and white face are identifying markers, as is the feather plume that curves off the back of its head (if you’re close enough to observe it).  I see them fairly frequently, flying over rivers or standing in shallow water here in Ohio.  Occasionally you can hear their croaking cry, which often sounds like frustration to me, particularly when I have unwittingly flushed one out from along a riverbank.  They hold quite still and you need to really look to see them at times.  But not this one…

This shorebird is patient, holding still for periods of time, then stalking slowly through the pond, alert for any movement below the waters’ surface. Notice how it raises and lowers it feet very deliberately.  They mainly eat fish, but a study of these birds in Idaho showed that almost half of the food their nestlings ate were voles, a mouse-like creature.  Who’d have thought?  Though it moves in a calm manner, when it spots something to eat, it moves fast.

To eat the fish it has caught, the heron flips it up and swallows it head-first.  Fortunately, this is a manageable bite- herons have been known to choke to death on large fishes (hopefully a rare event).

A Canada Goose strolls along the shore, yet our heron remains unperturbed.  This one is less skittish than many I’ve seen.

The heron, having picked up a nice meal, now flies away.  An impressive show!

When this incident was over, I was very happy to have been in the right place at the right time.  Believe me, that doesn’t happen every day 🙂  But when it does happen, it makes it all worthwhile.

17 thoughts on “A Majestic Bird Catches a Fish.”