Good news!  A few days ago, I got a new camera- a Canon EOS Rebel T3i DSLR.  I also picked up a Canon EF-S 55-250mm f/4.0-5.6 IS Telephoto Zoom Lens.  I realize I seem to be speaking gibberish to the non-shutterbugs out there, but suffice it to say that this is a camera upgrade for me, and once I learn how to take full advantage of this equipment I should have better pictures to post here.  This setup is good beginners’ gear for serious photographers- I wouldn’t call myself a photographer yet, but I am enthusiastic and will do my best to improve.

Here’s some of the sights I saw recently at Griggs Reservoir along the Scioto River.

The Scioto River is a major river flowing through Ohio from north to south, emptying into the Ohio River.  The name is an American Indian word meaning ‘deer’.  In pioneer days, it was used for transportation; its floodplains were fertile farmland for both Native Americans and settlers.

I’ve been hanging out there recently.  It is a good place to get scenic pictures.  Also, I heard a bird singing along the riverbank that I really wanted to see…but that’s for a future post.

Griggs Reservoir is Columbus’s oldest artificial reservoir of drinking water.  The dam itself is only 35 feet high, but that’s still a lot of water.

These tree trunks were swept downriver and got hung up on the dam.

It’s relaxing watching all of that water coming down.

A Great Blue Heron hangs out just above the dam.  I edged my way closer to this bird very slowly.  He kept a wary yellow eye upon me but decided I wasn’t enough of a threat to fly away.  I got a few pictures and slowly walked back the way I came, happy that I did not disturb this magnificent bird.  I’ve heard them croak in seeming exasperation when they are driven off unknowingly by people.  This picture is worth clicking on to see the details of the bird. 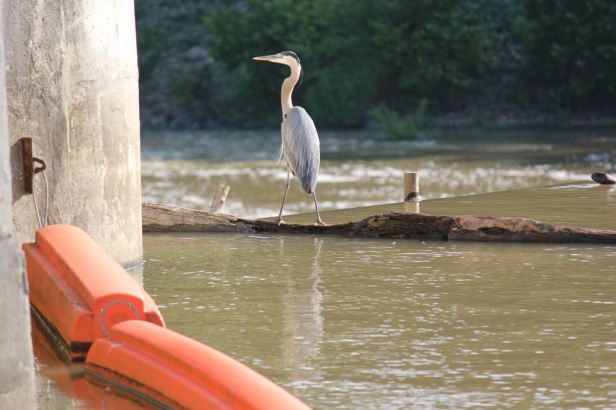 Along the line of warning floats, Double-Crested Cormorants hang out on tree limbs stuck in the river.  These are really interesting and unusual waterfowl, mostly black in color, who enjoy diving under the water for a good amount of time, catching fish while acting like a submarine.  They tend to be rather shy of people.  I often see them swimming along with only their neck and head out of the water.  One is sunning itself by spreading its wings.

Further above the dam, Canada Geese cruise around on the river.   These birds are often fairly tame.  Must be the bread that people feed them. 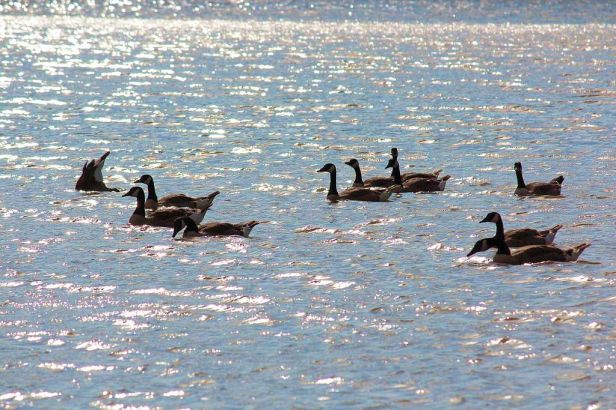 A mother mallard ushers her little peeps along the shore away from the strange man with the camera!

Cyclists, joggers, fishermen and people out for a stroll are common sights.  This regatta boat is being carried down to the marina to be launched. 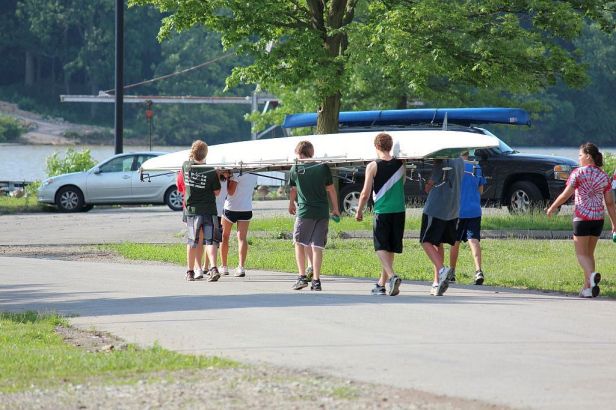 In a future post, I’ll continue my adventures downriver.  Getting away from civilization along the riverbank turned out to be an enjoyable experience with a funny twist or two.  Stay tuned!

4 thoughts on “With my New Camera at Griggs Reservoir.”