It’s that time of year again when lots of birds are raising their young all around us.  If you look closely, you will probably see signs of nature’s endless cycle nearby.

I was walking in a field recently and saw this bird:

This is a Killdeer, a common shorebird seen in plenty of places away from shorelines, funny enough.  This bird gets its name from its frequent call, kill-deer kill-deer kill-deer, which rings through the air in the spring.  They enjoy hanging out on large lawns, parks, fields and even parking lots where there is plenty of wide-open flat space.  They run around swiftly, starting and stopping frequently in their search for insects.  You can identify them by their call, their longer legs,  their brown back and white breast, and the double black band across their bib.

As I walked by, this bird did the following display: 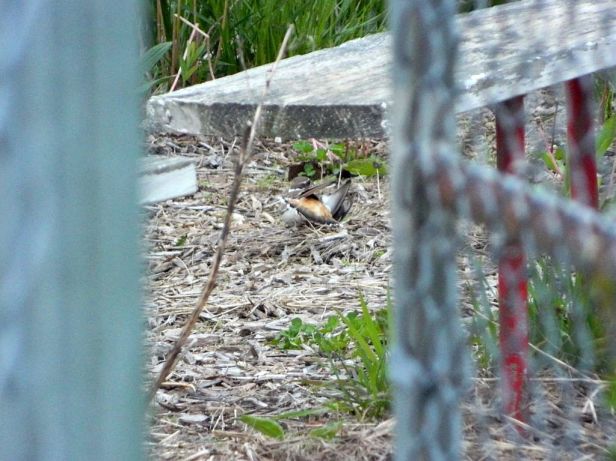 Note that she is pointing her tail towards me and has one wing stuck out at an awkward angle.  Is her wing broken?

She would like me to think so.  This is an example of a distraction display, which was intended to make me concentrate on her.  Distraction displays are instinctual false signals that some species of birds send, hoping to attract nearby predators.  Why would a bird want to do that?  Because this little bundle of feathers was not far away: 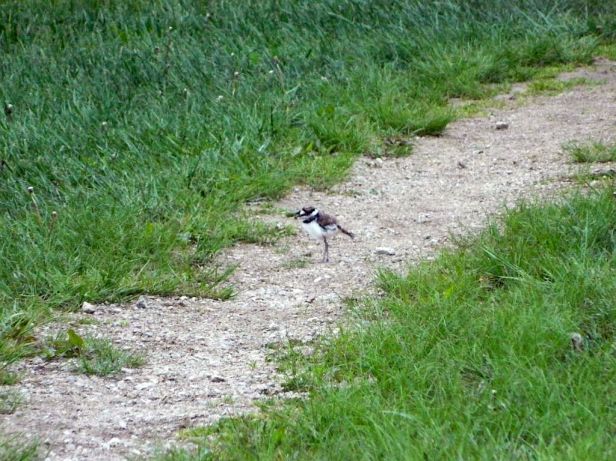 That’s a young Killdeer- notice the smaller stature and single black band around its neck.  Mother was trying to distract me away from her young one.  I stood back a ways, held still and got some photos from a distance.  After a while they didn’t realize I was still there.  Note that mother killdeer’s wing is fine now.

And so they walked off to look for more good stuff to eat.  No broken wing act necessary!

7 thoughts on “Shorebird Mother and Baby- is that a Broken Wing?”